A website designed to accept donations on behalf of Busted in Acadiana administrator Christopher Hebert launched Oct. 6 while Hebert was still behind bars on charges of stalking and cyberstalking. 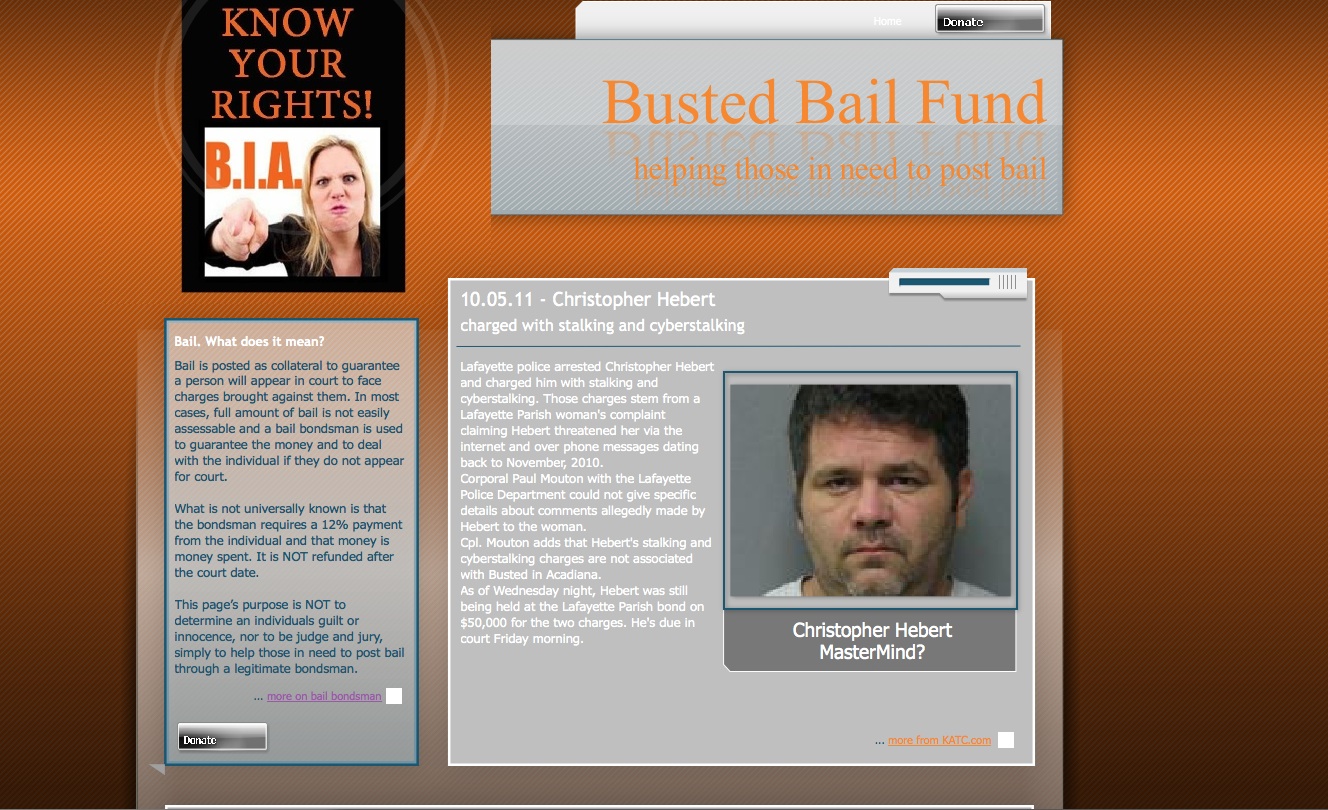 Christopher Hebert's civic mindedness knows no limits. The man behind the Busted in Acadiana Facebook mug shot fan page, which was coincidentally taken down again shortly after Hebert bonded out of jail following his Oct. 5 arrest for stalking and cyberstalking, is the star of yet another public service website.

Registered Oct. 6 when Hebert was reportedly still behind bars, www.biabail.com prominently features Hebert's most recent mug shot and labels itself as the "Busted Bail Fund: helping those in need to post bail." Next to Hebert's own mug shot is an excerpt from a KATC article detailing his arrest. The Busted in Acadiana logo hangs comfortably at the top left corner of the page.

Also included on the BIA Bail home page is a list of arrestees currently seeking donations for posting bail. But the only person listed on the collection tab is Christopher Hebert alongside his goal of raising $6,000, or the 12 percent payment needed for Hebert to post his $50,000 bond. It's unknown exactly when Hebert bonded out of the Lafayette Parish Jail because the Lafayette Parish Sheriff's Office computer systems are down until Tuesday afternoon. He's believed to have been released Friday evening or Friday night.

Lafayette Police Cpl. Paul Mouton says Hebert's Oct. 5 arrest was based on a series of complaints a woman filed late last year alleging Hebert had made electronic and phone threats against her. Police will not release details on the alleged crimes, but Mouton says new developments on the investigation surfaced in recent weeks and led to the arrest. Hebert's arrest is unrelated to Busted in Acadiana.

Not unlike the Busted in Acadiana mug shot mecca, the BIA Bail website is using a cause to further Hebert's own finances, encouraging those in need of bail assistance to "email your story to [email protected]"

"This page's purpose is NOT to determine an individuals guilt or innocence, nor to be judge and jury, simply to help those in need to post bail through a legitimate bondsman," the BIA Bail page explains. "What is not universally known is that the bondsman requires a 12% payment from the individual and that money is money spent. It is NOT refunded after the court date."