A great secret of festivals is that there are some vendors who only come out for the event - there are no brick-and-mortar restaurants where their fare is readily served.

The second full weekend every October Girard Park, used most of the year as a place for impromptu barbecues, pick-up basketball games and its walking track, becomes the epicenter for all things Cajun and Creole. Festivals Acadiens et Créoles is a hotbed for hot plates of food to soothe and intrigue you. 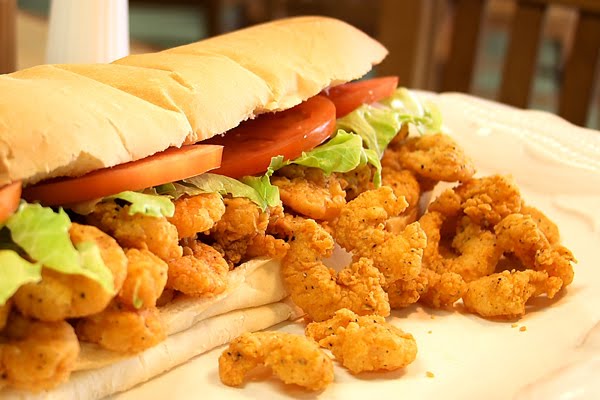 A great secret of festivals is that there are some vendors who only come out for the event - there are no brick-and-mortar restaurants where their fare is readily served. Every year at Mardi Gras I head to the corner of Jackson and Johnston streets where a family makes the best pork sandwiches. I enjoy one each day until Mardi Gras is no more. With some of these food suggestions, that is the way.

Remember to bring cash. Most vendors aren't going to take a debit or credit card.

So let's tantalize your taste buds and get them thinking about what your choices are this weekend.

CATAHOULA'S - Rachel Leckelt took over this famous restaurant a short time ago and has pumped a vitality back into the brand as well as Grand Coteau. While it will be serving up a bisque and lasagna and fish tacos, the treat you don't want to miss is Catahoula's shrimp and mushroom crepe. Anyone who has spent time in Paris knows that while we have hot dog carts, they have crepe carts, and this harkens to that line of thinking. A delicate and soft egg-based blanket in which tender mushrooms and Louisiana shrimp can snuggle will set you back $7. First bite will make you think you're in Europe - until you hear the zydeco playing.

COCHON - New contender with a solid backbone, Cochon just opened in Lafayette's River Ranch development and is determined to prove it is worthy among all our Cajun food. Chef Donald Link created the menu for both this and his original New Orleans' Cochon, and what the man loves best after smoking meats is pickling things. Pickled fruits and vegetables from all parts of the garden and grove make their move at his restaurants and here the pulled pork sandwich with pickled cabbage, smoky, crisp and lean, is the thing to get. $7

BON CREOLE - Bon Creole is in New Iberia, but as of this writing its now famous crawfish spinach boat isn't on the menu. Ever see people walking around Festival International with that dreamy, creamy bread bowl stuffed and oozing onto their fingers, sucking their hands as they scramble away to eat? You know what I'm talking about. And after you get done eating what amounts to a crawfish and spinach cream sauce you get to eat the bread soaked with its juices. They are also serving up burgers, shrimp poboys and red beans & sausage. $7

FEZZO'S - Fun name, great menu and an even more popular dish. The fried catfish with seafood éouffée on top is just about the most simple and most delicious thing you can get your hands on. If you have tourists in from out of town scared of catfish, tell them Fezzo's gets farm-raised fish and they should shut up and eat. The fish crust is the thing - the fish itself is meltingly soft, and the seafood party on top makes it. Fezzo's has corn dogs with French fries for picky kids as well as seafood étouffée and a crab boulette topped with étouffée. In other words, you'd best like étouffée. $7 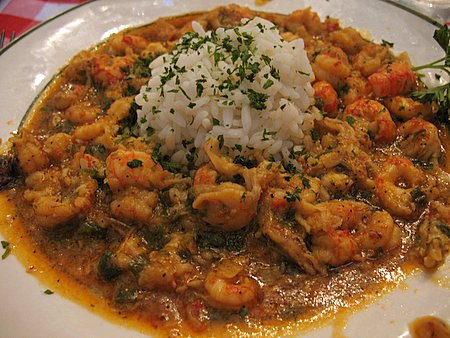 POUPART'S - Everybody gets a sweet tooth now and then. Some of us, like sharks, have several rows of sweet teeth just waiting to chomp. You should hit up Poupart's. Now with two locations, one in downtown Lafayette and one on Pinhook, Poupart's has been around long enough to have fed everyone in Acadiana at least five times. Many restaurants in town get their bread here. While the menu has both savory and sweet, try Poupart's chocolate eclairs. Simple. Rich. Decadent. Perfect. At $2 apiece, buy several.

PAT'S DOWNTOWN - Pat's is as famous for its plate lunches as its fancy new patio on which to relax. A famous spot to chill during and after Downtown Alive! on Fridays, Pat's will be offering crawfish enchilada, chicken and sausage jambalaya, crawfish étouffée-stuffed potato and peach cobbler. These last two make folks flock to Pat's. This restaurant has several types of stuffed potatoes - because who doesn't like a creamy sauce or meat when they carbo-load - and each is terrific. Oddly enough these are easy to eat at a festival. The cobbler is popular, too, and once lured my ill friend from her sickbed with its power. Potato is $5 and the cobbler is $3.

This is just a highlight of some well-remembered favorites and by no means represents all the vendors waiting to tempt you. For a complete list of all the foods being offered at this weekend's Festivals Acadiens et Créoles as well as a music schedule and places to see and stay in Lafayette, grab our guide in this week's issue. And remember to bring hand sanitizer along with your appetite.