The Democratic State Central Committee has entered the fray in the increasingly contentious House District 39 race, taking aim at the lone Republican in the contest. 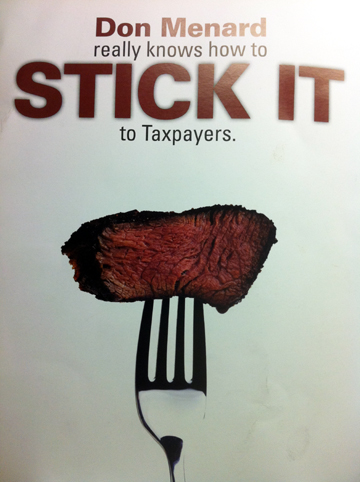 A flyer mailed to voters in the district characterizes Menard as a career politician who tried but failed to raise his $65,000 annual salary by $20,000 and who wastes taxpayer money on lavish meals at Ruth's Chris Steakhouse and other fine eateries. The mailer prompted Menard to purchase a half page ad in The Daily Advertiser Wednesday answering the charges, pointing out that 22 of his 30 years in public office were served first as an alderman and later as mayor Cankton, both of which are unpaid positions. Menard also asserts that the expensive meals were with federal officials and the "results of the $400 meal they mention resulted in a $1.4 million federal grant for design and environmental studies for the I-49/Hwy 90 interchange. The investment was worth it.

Menard is vying for the House seat being vacated by Rep. Bobby Badon. His opponents on the Oct. 22 ballot are Democrat Stephen Ortego of Carencro and Jamie Arnaud, no party, also from Carencro.