Yeah, it's a Barbara Mandrell tune, but it describes Randy Travis to a T. By Walter Pierce

Country music superstar Randy Travis didn't get a cellular phone until he was 51 years old. Randy Travis is 52 now - indicative of just how "old school" he is.

Yeah, it's a Barbara Mandrell tune, but it describes Randy Travis to a T. By Walter Pierce 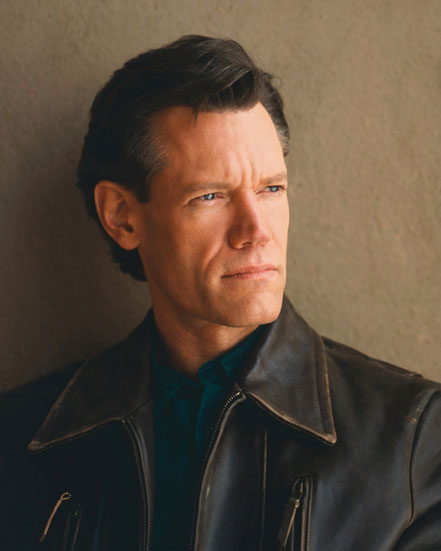 Country music superstar Randy Travis didn't get a cellular phone until he was 51 years old. Randy Travis is 52 now - indicative of just how "old school" he is.

"It's probably safe to say I'm not going to be crossing over any time soon into making pop records," Travis says in a quaint, Southern drawl over that newfangled cell phone while driving from his remote home outside Tioga, Texas, to Dallas-Forth Worth International Airport an hour south. "If you listen to me speak you pretty much know that. I think when you look at the business as a whole I'll always say I'd love to hear more traditional stuff. But I think we're in good shape."

Travis was a pioneer in the neo-traditional movement in country music, which in the mid-1980s pressed back against the genre's increasingly frequent flirtations with pop music - it would ultimately be a losing cause, or at least a draw - beginning with his debut release, Storms of Life, in 1986.

It hasn't worked out badly for him since. To date, the lanky North Carolina native and Texan by choice, who will perform Wednesday, Oct. 26, at Parc International for Miles Perret Cancer Services, has scored 18 No. 1 singles, 10 gold records, eight of which went platinum, double platinum, triple platinum and even quintuple platinum. Platinum is 1 million units sold, so if we stacked up Randy Travis' 20 studio albums - thin vinyl albums, not CDs, mind you - they'd stretch from Tioga to a honky tonk on Mars, and Randy Travis would climb that stack of records and perform a medley of hits for the appreciative, bemused Martians, because Randy Travis has always selected music he loves as opposed to music he thinks will climb the charts. And he'll go just about anywhere to perform it.

"I'm very proud of the albums as a whole because when [longtime producer] Kyle [Lehning] and I started working together he told me, he said, Look man, I want to help make the best records that we can make, but at the end of the day you're singing these songs and if you don't love them, don't do 'em.' And I've really stuck by that. I'll tell you, maybe everybody does it that way, but it's hard for me to say this is my favorite track or favorite album."

But when pressed, the old-fashioned salesman shines through that high-tech phone: "Oh, it would have to be this newest," he laughs, referring to 25th Anniversary Celebration, an album featuring contributions from and duets with a veritable who's-who of country music - Willie Nelson, George Jones, Carrie Underwood, Tim McGraw, Ray Price, Kris Kristofferson, Kenny Chesney, Brad Paisley and even former Eagle Don Henley.

The album, natch, celebrates Travis' quarter century in the business, much of it spent as a member of the hallowed Grand Ole Opry in Nashville.

But even as country music continues to embrace pop music and gain widespread crossover appeal, Travis the traditionalist - his personal favorites are the holy trinity of Hank Williams, Merle Haggard and George Jones - sees hope for the style remaining true to its roots.

"If you look at a group of people from Jamie Johnson to Zach Brown Band, there's Josh Turner and Brad Paisely ... there's some really good traditional artists out there doing what they love," he says. "We could always use more of it, but I think we're in pretty good hands."