It was a once-in-a-lifetime opportunity for the Lafayette Little League Challenger Division team. And we have the plaque to prove it. 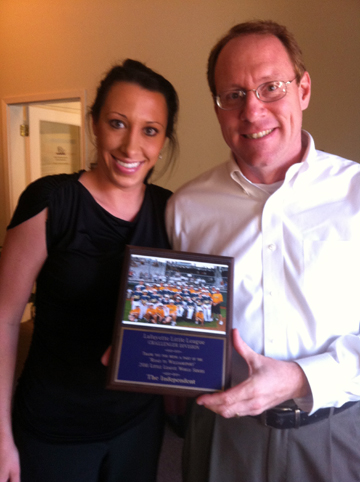 This past summer the Lafayette community rallied around the Little League Challenger Division team from the Hub City, a roster comprising special-needs kids for whom the Challenger Division is virtually their only avenue for playing America's pastime. Local media including The Independent helped publicize the team's fundraising efforts after the team was one of only two nationwide selected to play in a televised exhibition at the 2011 Little League World Series in Williamsport, Penn. - a journey that cost many thousands of dollars due to team members' exorbitant travel costs (many require medical equipment to travel, not to mention adult supervision.)

But our Challengers raised the money and in August played in that once-in-a-lifetime game. The Ind was proud to play a small role. On Wednesday, Tim Basden, father of one of the players, stopped by the office to present us with a plaque thanking us. We're flattered, Tim. The plaque is going onto a prominent place.

In appreciation - for the team, its spirit of sportsmanship and a handsome plaque - we put together a slide show of photographs taken at the game by Baton Rouge photographer Marie Constantin, fluffed up with some schmaltzy music we downloaded from the 'Net.