Roshell Jones announced Friday afternoon that after much consideration and meeting with both Rickey Hardy and his challenger Vincent Pierre, she's endorsing Hardy.

"Mr. Hardy is the only applicant in this race who can best conquer the challenges of District 44," Jones says in a letter to supporters. "Mr. Hardy was appointed to the House Appropriations Committee during the final weeks of the last legislative session and continues to maintain this prominent committee assignment. He also has a very close relationship with the governor's office. These very important factors are why I believe Mr. Hardy can best ensure the great needs of District 44 are met.

"But those are not the only reasons why I support and endorse Mr. Hardy's re-election to House District 44. Mr. Hardy is a man with great integrity, who has tirelessly fought for his constituents ... He has been a champion for putting the needs of the community ahead of personal gain and has been a relentless fighter for justice." 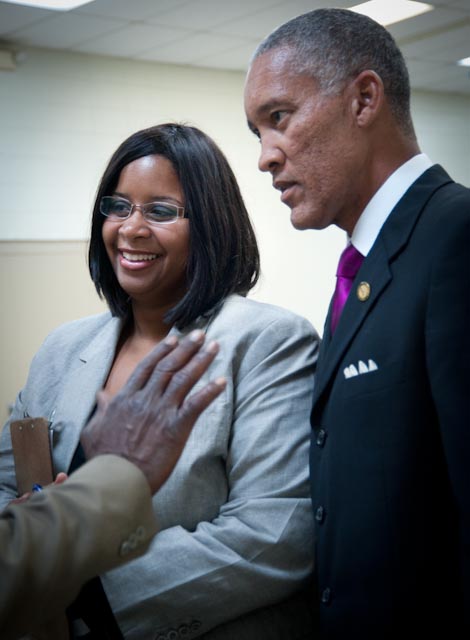 Minutes before the press conference started, Pierre's campaign issued a press release claiming that the only reason Jones endorsed Hardy was because "promises were made to her" by Gov. Bobby Jindal and City-Parish President Joey Durel.

Pierre's camp also quoted Jones as telling Pierre in a phone conversation Friday morning that "they did offer me certain things."

But Jones adamantly denied those allegations both during and after the press conference and says the only promise she received is Hardy's support for her if she decides to run for another political office in the future.

"I called Mr. Pierre as a courtesy to let him know ahead of time that I'd be endorsing Mr. Hardy," Jones says. "I haven't spoken with the governor or Joey Durel."

The runoff election for Hardy and Pierre is Nov. 19. Hardy led the primary with 43 percent to Pierre's 40 percent.