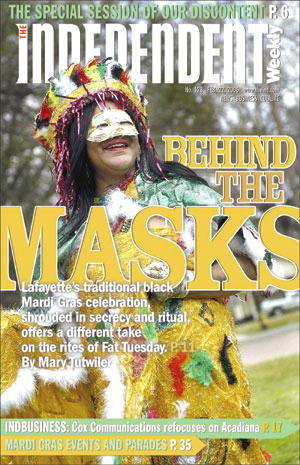 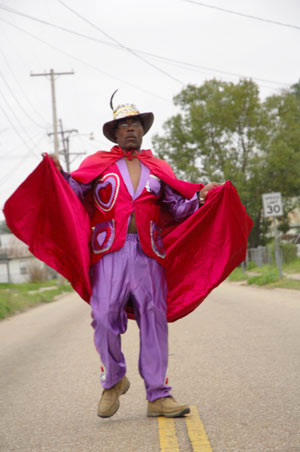 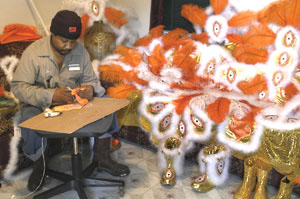 When Michael Batiste breaks out of his door on Mardi Gras day, he'll be lollypopping, strutting his colors and yelling his battle cry around East Clinton Street. Batiste and his neighbors are out to challenge groups from other neighborhoods for the title of Mardi Gras of the Year.

"Everybody comes from different areas," says Batiste. "Fightingville, Wine Alley, Zip, Veasey, Longbeach â?¦ When we come out, they got to move." The Mardi Gras competitors take to the streets about 10 a.m. on Fat Tuesday.

This is a Mardi Gras celebration with no parade, no organization, no ball and no rules. It's all about street theatre, disguise and dance ' and who has the most sensational costume and the best moves. Spontaneous competition, known as battling, takes place in the late morning in the vicinity of 12th Street. Any time a costumed group encounters another neighborhood group, whistles pierce the air and the street clears for dancing.

Battles may erupt as groups gather at Pontiac Point (the intersection of Surrey and Simco streets) around 1 p.m. to fall in with the bands marching in the Lafayette Mardi Gras Festival Inc. parade. But the big event, organized by a handful of people who don't want to see this unique tradition disappear, will be at Clark Field after 5 p.m. on Mardi Gras day. There, maskers compete, and one group will take home bragging rights as the best Mardi Gras of 2006.

"We say that we're pretty," Batiste boasts. "They're pretty on their end, and they feel more pretty than us. It's competing against each other. But we just lolly. We don't care if they're prettier than us or not, because we know we're already the prettiest. Because we know how to Mardi Gras."

Most Mardi Gras associations are social organizations that host balls and parades. The first formal white Mardi Gras ball and parade dates back to 1869. But the roaming groups of black maskers have little written history. Oral traditions often begin with "my daddy taught me to mask," or "it's been going on for a long, long time."

"I've been Mardi Grawin' as long as I could do it," says Batiste's uncle, 55-year-old Raymond Perry. "My daddy put me in a suit when I was about 8 or 9 years old." Batiste and Perry live in a neighborhood centered around East Clinton Street, dubbed Cropperville. "The Crop" is one of about a dozen old neighborhoods where rival Mardi Gras groups still battle.

The costumes are as elaborate and distinctive as another similar neighborhood tradition, the Mardi Gras Indians of New Orleans. But Batiste and Perry are adamant about the differences. "See, in New Orleans, they wear a lot of feathers," says Batiste.

"That's a different kind of Mardi Gras," Perry explains. "We respect them. Lafayette is all about paper box hats. That's the real deal. We're not looking to compare. It's a different stroke from New Orleans to Lafayette."

A typical costume begins with a suit ' pants and a long-sleeve shirt made of satin. Neighborhoods tend to have their own seamstresses who sew the suits. But it is the men and a few women maskers who gather to choose their colors and design, who do the shopping, and who take the plain suits home to decorate. "Well, you got lace, you got bows, you got bells, you might have six different laces, you got silk, satin, brocade," says Perry.

"You might put a couple of feathers on your hat," Batiste offers.

The box hats, unique to Lafayette, are made of cardboard. Designed like an academic mortarboard, the big flat hats are covered with floating fringe that sways with every step. Masks are cut from screen and painted. Shiny sequin-covered shoes and gloves help conceal extremities of the masker and disguise the color of his skin. "It's called old school," says Perry. "This is the Mardi Gras Lafayette been knowing all this century. You don't have the screen mask and the paper hat and the shiny shoes, you're not no Mardi Gras."

Barbara Matthews, 65, started masking with her brothers in the 1950s. They made their own costumes. "Back then you made them out of anything that was lying around," she says. "I started dressing up with them." Secrecy was paramount; only members of the group knew who was masking. Each group had its own colors, while designs varied within the group. Maskers carried bull whips and switches, spreading the spirit of Carnival and sometimes settling scores. "I got whipped one year," Matthews says. "Yeah, it hurt. It was a guy I knew; I didn't want to talk to him. I recognized him, and I told him I would call out his name if he didn't stop. That made him stop. He didn't want anyone to know who he was."

"They used to whup us," adds Batiste. "We used to come outside and holler, 'Mardi Gras, Chic-a-la-pa, break your head on a hot corn bread.'"

"They used to come in the house and get you. They'd spank you on a little chic-a-la-pa. For all the cutting up you did all year," Perry remembers with a grin.

Dometil Lewis is the seamstress for the Crop neighborhood. As a child, she loved Mardi Gras, which she describes as a community family celebration. "Everybody would be there," she says. "The Mardi Gras would get on 'The Block' [between Washington and Olivier] in Fightingville and dance in the street. They started running us. That was the fun part about it. They'd go 'Rrrrr, Mardi Gras, rrrrr.' It was scary. They make believe they want to whip you. They put their stick by you, or they whip you, no intention to hurt, but to make you scared. A lot of time we'd be hiding behind our mama, or whoever was bigger than we were."

While stories conflict about whether there was a real threat of violence on Mardi Gras, there was definitely bad blood between the neighborhoods. "There was a lot of fighting between Fightingville and McComb," Matthews says.

Her niece, Yolanda Armstead, concurs. "At the time I was coming up, there was always a rivalry between neighborhoods," she says. She was raised partly in Fightingville, partly in McComb. "Those ones didn't get along. If you were raised in McComb, and you had a boyfriend in Fightingville, you didn't want your boyfriend to come visit you. There'd be a fight."

By the late 1950s, the Lafayette Police Department began confiscating whips and sticks and unmasking the revelers. Whipping persisted, however, into the 1970s. "They had bamboo sticks with leather on the end," remembers Armstead. "They would whip anybody. Sometimes it would be somebody they had a grudge against. Sometime it would be somebody you loved. I was scared. I'd stay in the back of the crowd."

"I was glad when the police started taking the whips," Matthews says. "But the Mardi Gras started dying down. It used to be, you couldn't move without seeing a Mardi Gras." Pressure from law enforcement continued to take its toll, and by the 1990s fewer and fewer roving Mardi Gras were showing their neighborhood colors.

That's when John Lewis, a McComb resident, stepped in to preserve his community's culture. "John Lewis was discontented because the people who hosted the downtown celebration and contest awards didn't give too much regard for the Mardi Gras' costume design," says John Freeman, CEO of Southern Development and producer of the Clark Field Mardi Gras show. In 1987, Lewis started a Mardi Gras judging contest in a little field on the corner of 12th and Apple streets, the heart of McComb. He persuaded a neighbor, Dolly Mae Broussard, to DJ for the event. "We call this the hood," Broussard says. "John wanted to do something nice for the hood."

The event drew black maskers in steadily increasing numbers, so many that by its seventh year, when the event drew more than 2,000 people, the police department threatened to close down the show over safety concerns that revelers were blocking traffic. Lewis, meanwhile, was diagnosed with terminal cancer. "We couldn't give this up," Broussard says. "It was too important."

Freeman was at the show that year. Late that night he talked to Broussard, and offered to produce an event at Clark Field. The first year, 1998, drew a crowd of 3,000 revelers. Lewis crowned Broussard "Queen Dolly Mae." The Mardi Gras Show and costume competition has continued to grow, and with it a revival of the elaborately costumed Mardi Gras.

On Fat Tuesday, the Mardi Gras still roam their neighborhoods. They whistle, use high-pitched calls, stop traffic and lolly in the streets. The feathered headdresses of the New Orleans Mardi Gras Indians are as prevalent as more traditional box hats these days. Many follow the afternoon parade and join the bands. "Some people don't like them in the bands," Freeman says. "One of the band directors said, 'Listen, we need to get the Mardi Gras to march like a marching band.' Well, these people are the untamed. You don't want to tame them. You want them to be just like they are. You try to make changes, you can't imagine the conflicts this causes. They've created their own cultural base for this particular folklore and art design and how they create their own personal mysticism. It has some very deep connotations. It's very important to the family structure."

Bringing the Mardi Gras to Clark Field is important to preserving the tradition in a setting that ensures the safety of the participants, Freeman says. "They compete, and this is some serious stuff. A lot of these people are very modest income folks, and they spend a lot of money on these costumes."

The strong tradition of secrecy has persisted. From year to year, no one knows who will be masking. "The neighborhood Mardi Gras in Lafayette have a mysticism about not letting anyone know what their colors are, who's masked and where they're going to be in terms of coming out," explains Freeman. For the most part, groups are small: three to four maskers in similar colors. They meet in secret to choose their colors and designs. When they go shopping for fabric and beads, if they see someone who might be masking, they'll leave the store and come back later. "You don't hear anything when they're getting ready for Mardi Gras," Armstead says. "They'll go to someone else's house to get dressed, so you don't know who they are when they come out. If you put on a mask, you don't want anybody to know you."

"It's a competitive thing," Freeman adds. "My group against your group."

Some of the costumes make social and political statements. A number of capes carry the initials PB on them, to represent the 1970 closure of black high school Paul Breaux during the height of desegregation. "Paul Breaux had been a nucleus for all the African-Americans who ever had any education in the early 1960s," says Freeman. "It is surprising that a bunch of young people who never went to Paul Breaux choose to carry the banner. 'You close our high school. We were proud of it, and we're coming out in our purple and gold.' That was the statement."

And then there is Queen Dolly Mae. She's a grandmother raising two grandsons and taking care of her invalid mother. "I'm an inside-the-house lady," she says. She sings in the St. James Baptist Church choir 364 days of the year, and on Mardi Gras, she is clearly lit with an inner, joyous fire. One of the few women who masks, she is respected for preserving the tradition. "She's the queen bee of the street Mardi Gras," Freeman says. At Clark Field, the show doesn't go on until the syncopation of quintessential Mardi Gras song "Hey Pocky-Way" fills the air and the queen struts onto the stage. And as the crowd sings, "Hey, hey, hey, hey, hey, hey Dolly Mae," she dances.