Gabe Bako's new Tex-Mex eatery in the former Serranos Salsa spot on Johnston Street, just a half mile from the Mexican restaurant where he worked for more than four decades, is welcoming customers this week. 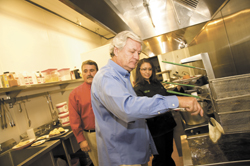