Dutch Kepler gives the earth a voice in his newest show. By Emily Henagan

With a brush of his tools and a touch of his fingers, artist Dutch Kepler transforms blank canvases into expressionist masterpieces. His recent show testifies to the BP oil spill's effects upon people and nature. The Independent sat down with the accomplished painter who once doubled as a jazz drummer.

Dutch Kepler gives the earth a voice in his newest show.
By Emily Henagan

With a brush of his tools and a touch of his fingers, artist Dutch Kepler transforms blank canvases into expressionist masterpieces. His recent show testifies to the BP oil spill's effects upon people and nature. The Independent sat down with the accomplished painter who once doubled as a jazz drummer. 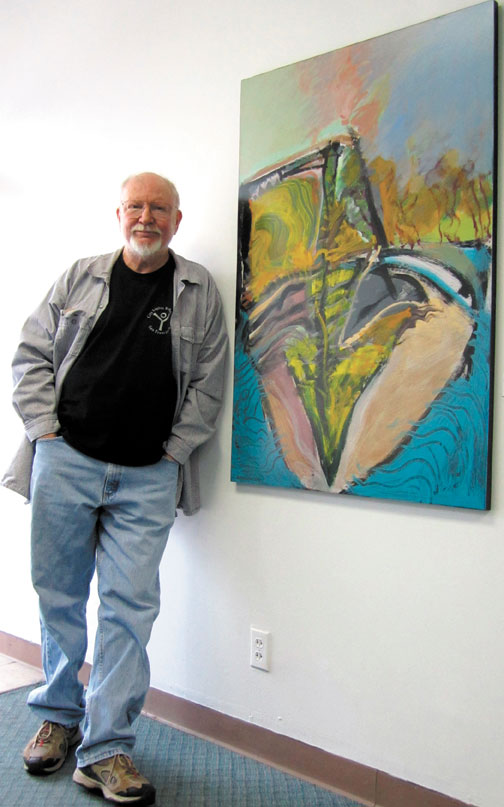 How did you become enamored with art and painting?
I actually started painting on cardboard in my parents' garage when I was in high school. When I got to North Texas (University), my mother had convinced me to go into advertising art so I could earn a living. I had a great uncle that painted up in the mountains in California who never had enough money to take care of himself. All through my growing up stages when I wanted to be an artist, they would say, Don't end up like your Uncle Cliff. You have to do something to take care of yourself.' My love of jazz is what propelled me to create abstract art. In painting and drum playing, I was reacting to the moment.

How did you balance your advertising job with your passion for painting?
At the time, it was called advertising art. Now, it's graphic design or advertising in communication. While a student at North Texas, I wasn't allowed to take painting because I wasn't a fine arts major, but I won first prize in painting in a student art show. I would do my assignments then I would stay up and paint the rest of the night.

Did your growth as an artist suffer any during your time as an ad prof?
When I was offered a job to teach advertising at USL (now UL Lafayette), it was because I met the guy who used to be there. He heard me speak at a student meeting and said, I think you will make a good teacher.' I told them on my interview, I'll take this job so I can afford to be a painter.' I kept painting and showing and ended up being there 33 years.

In what direction do you feel art education is headed?
I retired at (age) 57 because I didn't feel like hand skills were stressed anymore and the computer was ruining the art department. I was at the point where I couldn't paint anymore. I'd come home and the instant gratification of the computer was ruining my feeling and my sensitivity of mixing colors of paints with your hands while not having buttons to push. So, I just quit painting. Then, I did an (Adobe) Photoshop exhibition. People thought I was nuts. They said, You just need to keep painting. Don't go off on this other stuff; just keep painting.' And so I did.

Can you explain some of your works in this series, particularly what moved you about the spill?
The first part of it was just based off the imagery on the TV news. It is my take on all the stuff that was down there (underwater), all the terms they had for them and the spewage. After a while of doing those, I started thinking about all the animal recovery, and my mind just started going off in the direction of genetic mutation. Again, it was surreal to me. What might happen to some of those animals? The metaphor of the spearhead going into the Earth as a metaphor for oil drilling became the impetus for the snakes (in some of the pieces).

Having a theme show is a new direction for you. What does the work say about your politics?
I never paint on location; I rarely use photography; I just have memories of the things I see. Then, the oil spill happened. I had avoided theme shows for years, but I was watching so much news about the oil spill. There were all these close-ups that far down underwater. I started thinking how visual all that was. The destruction was making me mad. I love the wildlife. I grew up in Cape Cod and spent quite a bit of time in Grand Isle. It was just breaking my heart. I don't have problems with the oil in particular, but the careless, reckless behavior that caused all those problems for so many people and wildlife. After a while, it wasn't as political anymore to me. It was that I had been given this gift of so many images that just stay in my mind, and I had to get them out. I started painting quicker and quicker. I'm glad to have this opportunity with Donald (LeBlanc, the studio's owner). I call him Saint Donald, because he's always been a good person in that respect. He offers people chances to show their works.