Jennings and Crowley didn't flood during Rita, but wind wreaked serious havoc on the two towns. 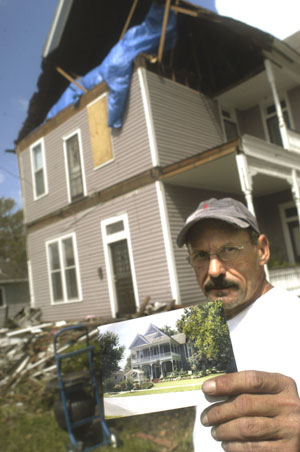 As the town of Crowley kicks off its annual International Rice Festival this weekend, the city and parish are still hard at work cleaning up debris and restoring the streets to their picturesque pre-Hurricane Rita status. About 20 miles from Lafayette and 60 miles from Lake Charles, Crowley is a small, quaint town of about 14,000 people; in addition to being the Rice Capital of the World, it's known for its historic homes and rambling oak trees. Now many of the oaks are uprooted in front of homes, some still on roofs or chopped up on the side of the road. Mayor Isabella delaHoussaye estimates that 50 percent of the structures in Crowley were damaged, with roofs coming off and windows broken. On some roads, electrical poles still lean into the road.

"I think we had 109 trees or parts of trees that had fallen either on homes, fences, garages, cars, some type of structure," says delaHoussaye. "To my knowledge, there were no injuries. We did lose a couple of homes where trees went through the center of the home, one or two completely destroyed." The city was without electricity for five days or more in some areas. Lee Hebert, director of Homeland Security and Emergency Preparedness for Acadia Parish, says the electricity is back on in about 90 percent of the parish, as is water and sewage.

Acadia Parish was under a voluntary evacuation for Hurricane Rita, and most of its damage came from sustained tornadic force winds. "All day Saturday, we were in that tornado area," says delaHoussaye. "I know that a tornado hit a barn and put it into a Cleco substation." The city quickly entered into a contract with the Office of Emergency Preparedness for cleanup, and most of the streets are clear. But huge piles of debris and tree limbs are piled in front of almost every home, lining streets as far as the eye can see. Hebert says more than half the parish is still waiting to be cleaned.

In south Crowley, one of the oldest sections of town, Ted Taylor stands in his front yard looking bewildered as he surveys the hole in his attic caused by a Sycamore tree. The tree's trunk and roots now lie on the side of the house, and the hole is loosely covered with tarp. "I was totally redoing the whole thing," says house painter Taylor. His home is a two-story, pink Victorian home dating back to 1904 and listed on the National Register of Historic Places.

He holds up a photograph of the home pre-Rita. Its elegant front has wide, double porches, white railings, and two gables decorate the top.

The bottom porch floor is all that remains on the front of the house. It's covered with splintered wood and pieces of railing, and a white wicker chair is crushed under debris on one side.

Taylor says the tree fell around 2:30 a.m. Sept. 24, right after he went to bed. "I was on the porch about a half hour before, and the wind just didn't sound right," he says. He's not sure if a tornado came through. "I had lots of water damage. It was like a waterfall down the stairs. I had to drill holes in the floor so the water could drain." The home isn't livable, and Taylor is staying in a camper in his driveway. A second tree behind the house was also uprooted and broke the main water line. Taylor plans to cut it down. "I've learned my lesson," he says. "They're beautiful trees, but they're not worth it."

Not far from Taylor's home are the railroad tracks and the Crowley office of Family Support, where food stamps are being handed out until Oct. 14. A line of people a block long wait in the hot sun, many holding umbrellas for shade. Shelli Britt is near the end of the line with her son Wesley. The Jennings resident decided to come to Crowley after seeing the crowds waiting for assistance in her hometown. "The line wraps around the block there," she says. "I wasn't going to wait that long." The power in her home is still out, and her home and property are damaged.

The landscape of Jennings, on the border of Jeff Davis and Acadia parishes, looks similar to Crowley. The white tin roof blew off of Our Lady Immaculate Catholic Elementary School on the way into town, and sections of the roof lay in a pile in the grass. The downtown area and its historic Strand Theatre and Ziegler Museum are relatively untouched, but part of the roof of the fire station peeled off.

By 3:30 p.m. in the afternoon, the Food Stamp line at the Jeff Davis Parish Office of Family Support has gone down and wraps around the parking lot instead of the entire block. The skies are getting cloudy, and the wind picks up. Veronica McBride from Lake Charles has been in line since 1 p.m., and ignores the darkening skies. "What kind of weather? Do I need to take shelter?" she asks sarcastically. Just then, rain starts coming down in large bursts. Some people scatter; others take out umbrellas or huddle under a tent.

Off the interstate, the Jennings Oil & Gas Park and its Alligator House tourist attraction are open, and manager Lou Anna Carty is holding a baby alligator named Nemo. "I've had lots of tree spotters and tree cutters here today," says Carty. "I've had the National Guard here." A paramedic from Colorado just left, asking where to find Louisiana souvenirs.

Carty rode out the storm in her home in Jennings and was out of power for eight days. "I can remember how we felt when Katrina hit," she says. "People coming by, and they were displaced. Now, we're the ones."