Jeffery Broussard and the Creole Cowboys say they were racially targeted by three white males. 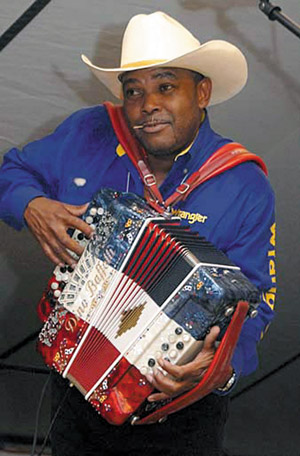 In a phone call from Baltimore, Jeffery Broussard is still unnerved by the incident. "I'm going to be straight up with you," he says. "I think there's some racial action there. That s--t was uncalled for. The guys that did this weren't even at the dance. It was just three bald-headed white guys who came from out of the blue and did this crazy s--t."

On Sunday, Aug. 12, just after 11 p.m., Broussard and his popular zydeco group the Creole Cowboys were loading up their van with musical gear outside of Grant Street Dancehall. The vehicle was in the parking lot in front of the club, facing Jefferson Street. Broussard was talking with a white woman near his van about the possibility of some upcoming gigs.

Broussard noticed a jacked-up gold pickup truck in an adjacent parking lot. The truck was locked in the parking lot by the entrances roped off with chains. It exited the lot by driving over a large concrete berm and then came to rest in the street for about a minute. Broussard didn't pay much attention to the vehicle and continued his conversation with the woman. (She has asked to remain unidentified but has corroborated the band's story.)

The truck then pulled into the parking lot in front of Grant Street, just past the van. Broussard noticed three young white males riding in it. "I didn't pay it no mind," he says. "I was talking business about gigs." Broussard's brother, Clifton, was loading equipment into the van, whose back doors were open. He heard the men in the truck yell at his brother, but he didn't hear what was said. Neither did Jeffery. But when he didn't respond to the men, the truck began to back up, heading toward the van.

Scrubboard player Brandon Ledet was standing at the entrance of the club's porch and started yelling and waving his arms, trying to get the attention of the driver and Clifton. "They would have gotten me," Clifton says. "Because when I turned around they were on me, steady coming. I jumped out the way, and they ran over the fiddle." The instrument belonged to fiddler D'Jalma Garnier, who didn't play the gig that night but who had loaned the instrument to Jeffery for the last year.

Garnier recalls answering the phone that night and hearing Jeffery on the other end saying, "Man, you're going to kill me. You ain't going to believe what happened. That fiddle just got completely smashed." Garnier says its history is priceless. He acquired the fiddle from his parents, who had led a church-based orchestra in Los Angeles. It once belonged to a 90-year-old member who had a heart attack while performing with it. Garnier owned it for the last seven years and lent it for extended periods to Cedric Watson of the Pine Leaf Boys and more recently to Jeffery. Garnier says it's going to be difficult to find a fiddle that replicates that "high old-timey sound."

Ledet says when the truck crushed the fiddle, "Then that's when they jammed it to the floor and skidded out of the parking lot as hard as they could." The band members couldn't get the license plate number because of the amount of black smoke pouring out of the vehicle. The truck drove through another set of chains around the parking lot and ran over a stop sign on the corner before fleeing the scene.

The band contacted the Lafayette Police Department, and the initial police report lists the complaint as "simple criminal damage to property." The description of the incident reads: "Complainant advised unknown white males in a vehicle attempted to hit them in their vehicle. During the altercation an instrument was broken. Suspects were unable to be located during initial investigation." Cpl. Paul Mouton says detectives are looking for a gold Ford F-250 pickup ' a model made between 2001 to 2005 ' with a lift kit and mud tires.

"I played that whole weekend with Jeffery," Ledet says. "We had no prior run-ins with anybody. It was a random incident with some guys looking to make some trouble." And Ledet believes that while the police are treating the incident as one of damaged property, it's really about race. "The zydeco community is primarily African-American," he says, "but we have a lot of Caucasian followers too. Overall, it's a family-like-community, whether it's white or black, but none of us are going to lay down for something like this."

Jeffery agrees that the incident was racial. "I think that seeing a black guy and a white lady talking pissed them off. But hey man, them days are gone. I've been playing music since I was 8 years old, and I ain't never experienced no s--t like this. Never. It was just some crazy-ass white punks who feel that they can rule the f--kin' world, and that s--t don't run no more. It don't work, not toward me."