As the likelihood of a costly lawsuit against LCG over a now-blocked waste transfer facility ramps up, the story of how the deal was cut gets weirder. By Heather Miller

Sunbeam Lane residents have waged a legitimate and so-far successful battle over the construction of a trash facility in their north Lafayette neighborhood, but weeks after the City-Parish Council took action on the project and thanks in part to the pre-election day timing of the controversy  - the stink over Sunbeam Lane still permeates. 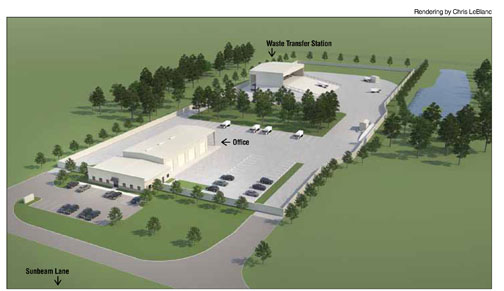 As the likelihood of a costly lawsuit against LCG over a now-blocked waste transfer facility ramps up, the story of how the deal was cut gets weirder. By Heather Miller

Sunbeam Lane residents have waged a legitimate and so-far successful battle over the construction of a trash facility in their north Lafayette neighborhood, but weeks after the City-Parish Council took action on the project and thanks in part to the pre-election day timing of the controversy  - the stink over Sunbeam Lane still permeates.

With few zoning regulations in Lafayette Parish, it seemed in late September and early October that nothing could be done to block the transformation of Sunbeam Lane into a daily stopping point for truckloads of garbage being hauled from surrounding areas. Waste Facilities of Lafayette LLC followed all applicable guidelines when applying for a local permit to build a 16-acre waste transfer facility on a small island of unincorporated land surrounded by city plats.

Just as the company received its final approval from Lafayette Consolidated Government's Planning, Zoning and Codes Department, someone on Sunbeam Lane caught wind of the plans.

Once faced with opposition, Waste Facilities of Lafayette developers said trash wouldn't escape, the facility would be clean and deodorizers would ameliorate any odor problems the business may cause.

Those assurances, however, meant little to Sunbeam Lane residents who were never notified by the project's developers or anyone else with a hand in the project - including LCG's permitting office - that a facility of this type was moving in. Regulations governing unincorporated Lafayette Parish do not require public hearings or notifications for projects of this type, though even LCG Chief Administrative Officer Dee Stanley 'fessed to The Daily Advertiser that informing residents of the imminent construction would have been the corporate neighborly thing to do."

In neighboring Coteau in Iberia Parish, residents who live in the vicinity of a waste transfer station say there's no deodorizer strong enough to combat the smell of garbage when a southeasterly wind blows during humid summer months. Gordon Doerle, owner of the waste transfer station in Coteau, has erected tall netted fences along the back of his property to quiet the farmers who said trash from the transfer station was constantly landing in their fields.

The fences in Coteau haven't silenced other complaints about the high volume of raucous trucks racing to the station before sunrise every morning. And in north Lafayette, those same roaring trucks carrying loads of trash from other parishes would be steering in and out of the Sunbeam Lane neighborhood, across the street from homes in the incorporated city limits of Lafayette and down narrow, curvy roads already in need of attention.

Those concerns may have been all the City-Parish Council needed to hear when it unanimously backed an ordinance blocking the already approved facility from moving forward. It's not the first time in recent history that the CPC has bulldozed business plans that didn't jibe with what neighbors viewed as acceptable use of the land in question.

It was a critical vote for the council, as the measure that blocks Waste Facilities of Lafayette from building its facility has raised threats of lawsuits that could cost LCG - read taxpayers - millions.
"It's our job to follow the letter of the law, but it's also our job to govern in the best interest of the people," says District 7 Councilman Don Bertrand.

With Sunbeam Lane's garbage dilemma having arisen just a month before election day, the process of deciding its fate was buried with accusations of political jobbery and profiteering by politicos with much to gain from the project's demise.

At a press conference and via YouTube campaign videos, City-Parish President candidate Mike Stagg accused City-Parish President Joey Durel of having "one million reasons" for the waste station's permitting process to be a smooth and quiet one. River Ranch partner Rodney Savoy is a listed agent for Waste Facilities of Lafayette, and Durel in 2008 received $850,000 from River Ranch in exchange for two acres of property along the river and for providing Durel with direct roadway access from River Ranch to his Steiner Road home.

"The residents in the area around the Sunbeam Lane waste transfer site were treated differently because they were not Mr. Durel's friends," Stagg said on his campaign website.

Durel's administration has long maintained that it had no knowledge of the project before The Daily Advertiser contacted Durel's office. But Durel declined to comment to The Advocate or The Advertiser when asked about Stagg's allegations, also forgoing attendance during the portion of the heated City-Parish Council meeting that sent the waste station permits into the trash bin.

Durel now says his silence stems from the source of the attacks.

"I really haven't heard any accusations from anybody credible. It came from a political opponent," Durel says. "I wasn't going to dignify those accusations from someone who clearly made it up as he went."
Before any transaction between Durel and River Ranch ever took place, Durel received an opinion from the state Ethics Board that cleared him of any legal or ethical conflicts. Durel is owed no money by River Ranch owners, he notes.

Says real estate developer Monty Warren, who helped to broker the transfer station deal: "We never called Joey and said we need your help to get this thing built - because we didn't. We just followed the rules."

The Advertiser reports that the permit for Waste Facilities of Lafayette was signed by 15 different Planning, Zoning and Codes Department employees who had no legal grounds to deny the permit, nor did they have any obligation to notify Durel's office. But Durel's refusal to address the accusations pre-Election Day has only fueled a perception of impropriety that still infiltrates the blogosphere as media reports continue to surface.

"There's one of these facilities less than a mile away, and it was built a long time ago," Durel says. "I'd never even heard of that one until this came up. If someone was going to build a gas station down the street from your home, you'd probably never know because it's built where there are already gas stations around. There was nothing that triggered any kind of a red flag other than the emotion of having something like that near someone's home. It's in an industrial area. The shoe fit. [Planning and zoning officials] were playing by the rules imposed on them by past councils. We can't pick and choose which ordinances we follow." 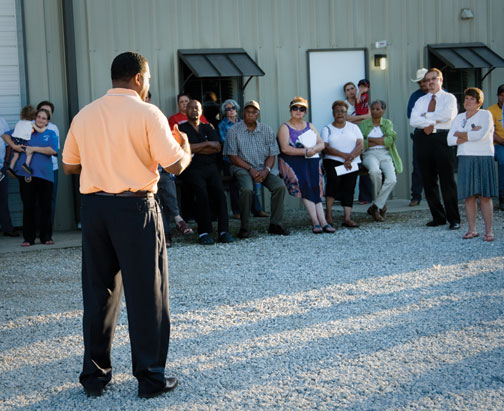 Councilman Brandon Shelvin led a neighborhood protest against the facility on Oct. 14.

The other target of Stagg's conspiracy theory is Don Bacqué, the outspoken Lafayette Charter Commission member who lobbied against the deconsolidation vote that was shot down at the polls Oct. 22.
Don and his brothers inherited the property in question on Sunbeam Lane several years ago when their mother died, Don says, and shortly after listed the property for sale through his brother's real estate firm, Van Eaton & Romero. When developer Warren approached the Bacqués about purchasing the property, "we never even knew who the buyer of the property was until we went to closing because the buyer is an LLC," Don says.

The buyer turned out to be Rodney Savoy, the River Ranch partner who purchased property from Durel in 2008. Durel's ties to River Ranch and Don Bacqué may have never appeared as such a twisted triangle if it weren't for one more detail that even Don admits brings the story to a "weird" chapter.

Don and his wife purchased Savoy's River Ranch home in June, a month before he and his brothers unknowingly sold their property to Savoy's business, he says.

Don's financial links to the property prompted further accusations that his role on the charter commission somehow created the lax regulations that allowed the Sunbeam facility to breeze through permitting. Incensed by the unfounded statements, Don calls "bullshit."

"We didn't even know that it was an unincorporated island until Monty told us it was," Don says. "The commission never discussed this. Never with a capital N. Someone is alleging in the blog that Bacque did something when he was on the commission. Show us that proof. I want to see the minutes of that."

Durel, who remained mum on the council's decision to block the transfer station until the day before the ordinance became law, decided against a veto of the ordinance and instead let it head to the books without his signature.

"I worry about what message this council has sent to property owners and potential employers," Durel says in a memo to the council. "I worry about what precedent has been set and its impact on future development in the parish. But mostly, I worry about what this decision could cost the taxpayers. This issue, created in part by a lack of regulations, which could have been addressed by previous parish councils, has now become a matter placed into the lap of this government. It should also be pointed out that, because we are consolidated,' the people in the city will likely carry much, if not most of the burden of what would be only a parish' issue under a different form of government."

Durel says he can't say much more on the issue with the threat of pending litigation but adds that "these are parish rules we're playing by."

"We need to try and make sure that 100 percent of legal fees are coming from parish government," Durel says. "Even though a City-Parish Council voted on this issue, it has nothing to do with city rules. If this would have been in the city this would've never happened. Certainly hind sight is 20/20, and you can always say in the future if there's even a potential for something like this we'll be notified. But we don't get a call every time a house is being built."