The Nov. 19 runoff has over the last several days revealed a rift in Republican politics in Lafayette Parish. 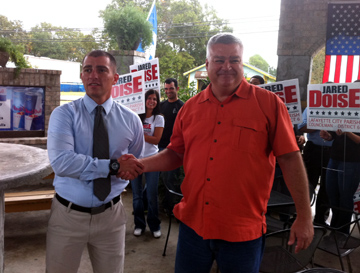 District 6 CPC hopeful Jared Doise, left, receives the backing of incumbent
Sam Doré, who was ousted in the Oct. 22 primary after one term in office.

As expected, District 6 City-Parish Councilman Sam Doré endorsed Jared Doise in the Nov. 19 runoff against Andy Naquin. The backing of Doré, who was eliminated from the race when he placed third in the Oct. 22 primary, was anticipated as early as late last week. The announcement was made at an 11 a.m. press conference at Legends on Bertrand Drive, one of several bars Doise owns in the Hub City.

Backed by the Tea Party of Lafayette, the Acadian Home Builders Association and robust campaign contributions, Naquin placed first in the three-man field on Oct. 22, garnering 43 percent of the vote to Doise's 32 percent; Doré received 25 percent.

The runoff has over the last several days revealed a rift in Republican politics in Lafayette Parish, with mainstream elected officials - City-Parish President Joey Durel and Assessor Conrad Comeaux - urging supporters to back Doise against what they perceive to be a creeping Tea Party influence in parish politics. In an email Friday to supporters, Durel asked voters in District 6 to not "send me another person that is simply "against," a reference to Councilmen William Theriot (District 9) and Jared Bellard (District 5) who have often been at odds with the Durel administration's fiscal prerogatives and who won narrow re-election victories on Oct. 22.

Naquin, meanwhile, is not a member of the Tea Party of Lafayette, but he tells The Ind he shares many of their views on government: "They're for smaller government, less taxes, more efficiency, more responsibility. Name we one thing that's bad in that regard," Naquin says. "I feel like they're standing for what I'm standing for."

Read more about the battle between the mainstream and Tea Party factions in Republican politics in Lafayette in Wednesday's cover story of The Independent, online by midnight and in racks early.