The failure to pay the monthly levy, which helps defray the cost of additional police details downtown on busy weekends, is apparently intentional by the bars in an effort to force the issue into court. 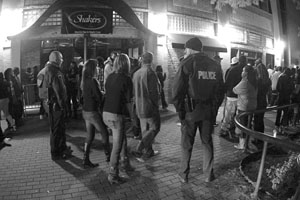 The fight between downtown bars and Lafayette Consolidated
Government over the special law enforcement levy has been
ongoing for more than two years.

[Update: LCG issued an agenda Friday afternoon for a special meeting Tuesday by the City-Parish Council during which Guamas Restaurant and Karma Nightclub will also appeal their three-day liquor license suspensions, bringing to five the number of clubs that will lodge appeals before the council on Tuesday.]

Three downtown Lafayette bars facing a three-day suspension of their liquor license for failing to pay the special law enforcement levy will appeal their suspensions Tuesday before the City-Parish Council.

Shawn Calvit, owner of The Rabbit Hole, and Kenward Bernis, who owns Bootleggers and Bed, will appear before the council to appeal the suspensions at their clubs, all located on Jefferson Street. Those suspensions were scheduled to run this weekend, Nov. 10-13, but are hold pending the outcome of the appeals. And an attorney for several of the bar owners says his clients will likely appeal to a district court judge if the council upholds the suspensions.

The failure to pay the monthly levy, which helps defray the cost of additional police details downtown on busy weekends, is apparently intentional by the bars in an effort to force the issue into court. Many of the bar owners feel the levy is unfair, that police protection is a public service. The dailies reported last week that eight of the 16 downtown bars assessed the fee are delinquent to the tune of roughly $38,000.

The monthly levy is commensurate with the capacity of the bars and ranges from a low of $186 per month for Frankie's Bar & Grill to Karma's $4,870 monthly fee.

For some back story on the downtown security levy, see our Dec. 9, 2009 cover story, "Bar Fight."