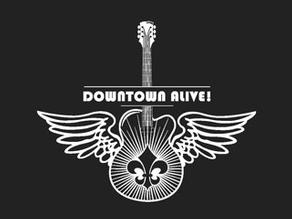 Nov. 18 Tab Benoit performs at Parc International. The following Wednesday, Nov. 23, is the final DTA of the season with the Pine Leaf Boys performing. The closing performance of DTA's fall season is always the Wednesday before Thanksgiving and includes the lighting of the tree in Parc San Souci. There will be a Toys for Tots holiday drive where the public is encouraged to bring an unwrapped, new toy donation for children.

Downtown Alive performances are smoke-free. One of the event's main sponsors is Let's Be Totally Clear, which encourages more publics events and venues to remain free of tobacco smoke. People can smoke outside of the park. Food and beverages begin at 5:30 p.m. with musical acts starting at 6 p.m. and running until roughly 8:30 p.m. Concession sales allow for more and bigger bands performing at DTA so it's asked that you leave ice chests at home.

Let's all hope there is hot chocolate available.