UL police order local musicians to pack it in. 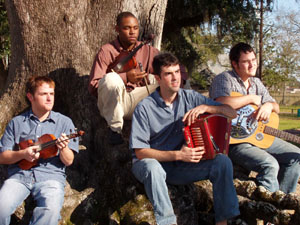 If The Pine Leaf Boys make enough money from their afternoon gigs to buy a pizza, it's a good day. But a recent encounter with the UL Lafayette Police has silenced the group ' at least on campus.

Bandmember Wilson Savoy says he and his roommates, Jon Bertrand and Cedric Watson, along with Drew Simon, have been playing Cajun music on campus since August ' usually with fiddle, guitar, accordion and t'fer. The acoustic quartet has performed on the corner of Rex Street and St. Mary Boulevard.

"We live near campus," says Savoy. "We like playing music, and the people like it. We go out there when there's nice weather to make a few bucks, but we're not begging for money. That's one of the nice things about Lafayette; the music is what it's all about."

While the group performs, there's an open case for passersby to part with their spare change. "People thrown in money," Savoy says. "We don't ask them. We make, on average, $10 a day." On the afternoon of March 23, The Pine Leaf Boys had netted $5 and had been playing for about five minutes when a UL Police car with its lights flashing pulled up to the curb.

An officer approached the group. "He said, 'Stop the noise. There's a complaint from the dean of students that there was noise on campus,'" says Savoy. "And he said, 'That's the same reason that we don't let bums beg for money on the street. So if y'all want to do it, y'all have to get a permit.' And yada, yada, yada. It was pretty offensive, so we packed up and left."

Pat Cottonham, UL associate dean of students, says her office received a complaint about loud music and adds that the band wasn't registered for an activity on campus, which is required by her office. "We didn't know there was supposed to be a band," she says. "People can't just set up and be on campus." Cottonham says The Pine Leaf Boys also didn't have a permit from Lafayette Consolidated Government to perform. She adds, "They were in a quiet zone, 20 feet away from an academic building where science classes were going on." (Montgomery Hall, the school's chemistry building, sits on the same corner.)

Cottonham also claims that university police had paid The Boys a visit about the noise a week earlier, a claim that Savoy flatly denies. Cottonham also says that the officer denies making a reference to "bums." Calls placed to the UL Police department were unreturned as of press time.

It was the first time the dean's office had received a complaint about the music, according to Cottonham. "But if someone calls and complains, then we look into it," she says. "I wouldn't understand how a band would be able to be there since August ' in a high traffic area ' and not be noticed."

Dean of Students Edward Pratt says the UL Police have informed him that The Pine Leaf Boys had been previously warned. "These are probably a bunch of nice kids," he says, "and I wish they would have come up to us, talked to us and said, 'Dean Pratt, we want to play music.'"

"I guess we're just not going to do it anymore," Savoy says. "It was kind of like a slap in the face. We weren't doing it for the money, by any means. In a way, we just wanted to raise the morale of the UL experience. A lot of people take tours [of the campus] and a lot of students are out there. The only thing that differentiates this campus from LSU is live Cajun music, right here in Lafayette. We're supposed to be the Cajun heartland of Louisiana, and UL is supposed to be the Ragin' Cajuns, but they made us stop playing. I thought it was just pitiful, especially when we're on a street where they've got trucks driving by, at 100 decibels, blowing out their rap and crap."

"I'm disappointed that they feel they weren't treated fairly," Cottonham says. "We want to be seen as a friendly campus, but there are rules and procedures to follow. This wasn't the first warning given to them, and I would like to talk to them about what our rules and regulations are for coming on the campus. I'm sure that there's a reasonable way for us to have a dialogue about this."

But along with scraping their afternoon matinees, The Pine Leaf Boys don't intend to speak with university officials over registering their activity or securing a permit from consolidated government.

"No, of course not," Savoy says. "We didn't think we needed a permit, and we still don't."