Lafayette's Denny Culbert, who specializes in food photography, has teamed up with food historian Rien Fertel to gather and preserve the stories behind North Carolina's popular barbecue culture.

On Monday, Denny Culbert and Rien Fertel (grandson of Ruth's Chris founder Ruth Fertel) began their month-long excursion to document the people and institutions that make up North Carolina's food culture. The project is being done in conjunction with the Southern Foodways Alliance and the University of Mississippi's Center for the Study of Southern Culture.

"We seek the stories behind the food and the tales from the people who have dedicated their lives to the barbecue craft," Fertel says in a press release announcing the start of the project. "We'll talk to Piedmont pitmasters, whole-hog smokers in the East, and hopefully, a pig purveyor or two. There's no doubt plenty of meat, wood, and smoke will be tasted."

Culbert and Fertel plan to post their interviews, opinions and photographs daily on the project's blog and on Twitter. At the end of the trip, the oral history will be added to the SFA's online Southern BBQ Trail. 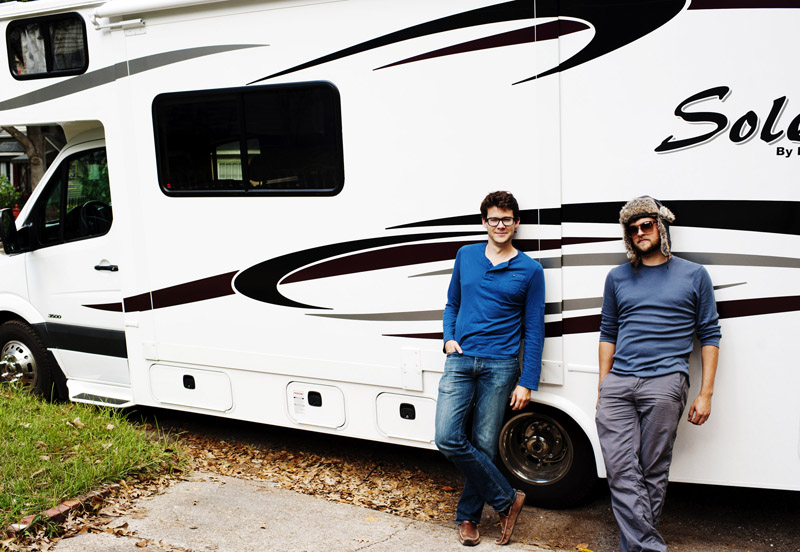 Rien Fertel, left, and Lafayette photographer Denny Culbert today began their month-long excursion aboard "The Barbecue Bus" to document the people and institutions that make up North Carolina's food culture.

The two are traveling the entire state of North Carolina aboard the "The Barbecue Bus," an eco-friendly RV, and plan to hit the state's major cities like Lexington, Raleigh and Chapel Hill, but also have smaller towns - Ayden, Hookerton, and Jason - on their food trail. Part of their research will be to capture the in-state rivalry between Lexington-style barbecue and the Eastern-style barbecue.

In addition to scouring barbecue eateries, they plan to explore the state's non-barbecue restaurant scene, farmers markets and microbreweries. The pair is asking Barbecue Bus followers to tweet them with suggested stops along the trail.

Fertel is completing his dissertation on Creole print culture, myth and memory at Tulane University. He teaches in the Tulane history department, researches and writes on culinary cultures, and has completed more than 25 oral histories for the SFA, including the Tennessee Barbecue Trail (2008). Splitting his time between the banks of St. Martinville's Bayou Teche and New Orleans' Mississippi River, Fertel calls himself a "Bicoastal Louisianian."

Culbert, a former newspaper staff photographer who recently transitioned to full-time freelance work, is building a career documenting food culture at home and afield. His first collaboration with Fertel was in early 2011, on the SFA's Lunch Houses of Acadiana Trail, which took the duo to Brenda's Place, Creole Lunch House, Josephine's Creole Lunch House, Laura's II, Ruby's Café and T-Coon's. Culbert is a graduate of the Ohio University School of Visual Communications.