Infrastructure in Plaquemines Parish is devastated, and the oil industry is trying to help its employees in the area. 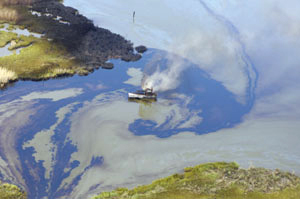 W\hile Louisiana communities navigate the red tape of bureaucracy and await federal support for home repairs and business loans, certain sectors of private industry are taking it upon themselves to get the ball rolling. In places like Plaquemines Parish, the oil and gas industry is trying to take care of its own.

The Louisiana Independent Oil and Gas Association has created the "LIOGA Industry Relief Fund," which is intended to be used for housing, schools, roads and other immediate needs. More than $500,000 has been raised, and Don Briggs, LIOGA president, says it will increase substantially when a master plan is announced.

LIOGA's membership has a vested interest in getting locales like lower Plaquemines back up and running. "We have to get the area going again," Briggs says. "These are all our employees. If this shuts down, we're in big troubleâ?¦ Buras and Venice and some of those places down there were originally started by the oil industry."

And now it appears the industry may be the one to rebuild it as well. The companies that service oil activities along the eastern gulf shore of Louisiana in Plaquemines Parish, along with a group of gas gathering plants along the Mississippi River there, were either decimated or swamped by a storm surge when Hurricane Katrina made landfall in late August.

Where storage facilities once stood, nothing but concrete slabs remain. Storage tanks are completely submerged, save their domed tops. The levee system in southern Plaquemines is still lined for miles with debris ' chunks of wood, overturned boats, trailers, oil tanks.

It's a heart-wrenching sight for those who know the area well. Briggs recently joined state officials aboard an Air Force reconnaissance jet for a closer look at the devastation. "Oh my," Briggs said to himself, staring out of his window. "That's not good."

More than anything else, the trip strengthened his resolve to get the fund under way. The Venice area is a stronghold for oil and gas service companies, ranging from air transportation to general repairs. Until these businesses can get up and running, the return of the oil and gas industry will be daunting.

"Recovery will be a long and hard slope," Briggs says. "This base is so important to us."

Aside from commercial and recreational fishing, along with sporadic citrus farming, oil-related jobs keep Venice and the surrounding region along the mouth of the Mississippi River afloat, economists say.

Scott Angelle, secretary of the state Department of Natural Resources, says all eyes and ears are on this tiny community. More than 101 million barrels of gas originate from Plaquemines annually, resulting in a severance payoff of approximately $16.4 million for the state. "All of these services can be restaged, but we don't know how long it's going to take," Angelle says.

The price tag to rebuild is expected to be in hundreds of millions, and Briggs wants the LIOGA fund to help with everything from schools to homes, but the organization is still in the early stages of planning.

Briggs says a committee has been formed to oversee the process, and other organizational options are being explored. The Louisiana Association of Business and Industry, the state's largest corporate lobby that has the same nonprofit status as LIOGA, teamed with the Baton Rouge Area Foundation to oversee the fundraising and granting process for a similar fund the foundation is sponsoring.

Plans are also under way by LIOGA to fund infrastructure needs in the southwestern part of the state, indicating just how widespread the devastation has been for Louisiana.

While LIOGA is determined to do something about the communities impacted by these temporary shutdowns, there is nothing they can do about the high energy prices on the way.

"Your biggest reason for increased energy cost will be the simple fact that natural gas is shut in," Briggs says. "That's going to be major."

Briggs says several factors can also be pinpointed. He says a lack of alternative energy sources is not a problem in the face of increased heating bills, but rather a lack of alternative drilling sites. "We're being held up by not being able to drill in other areas, such as off the coast of California," he says. "If those bans were lifted, we could really make difference in this."

Another problem has been finding the appropriate equipment and compressors ' many of which have been in short supply ' to replace damaged units. Until these facilities can get back online, many in these little communities will be without jobs, Briggs says. "Right now, with the damage shared between gas processing plants and offshore structures, we're short about 100 compressors and it will take time to build all those compressors, and put them on," he adds. "But I expect they will come on in the same fashion as normal repairs will."

Repairs and damage are so widespread across coastal Louisiana that Briggs says it's hard to place a timeline on when all infrastructure will return to full capacity ' some segments may be fine in a matter of weeks, while other parts could take months or years.

"Different parts of it will be back up soon, while others will take longer," he says. "But our industry is one that will make it happen ' no matter what."

Jeremy Alford is a freelance journalist based in Baton Rouge. His work has appeared in The New York Times, Dallas Morning News and other publications. Reach him through his Web site at www.jeremyalford.com.