Nine civic groups have been speaking up for the silent voices who slip through the cracks in Lafayette's public education system, and a majority on the school board are listening. By Heather Miller

When nine local civic groups coalesced to face the state of public schools in Lafayette Parish, their message was as emphatic then as it is today: Toss the notion that our poorest kids can't learn. We can't - and won't - wait 30 years for a sizable increase in our high school graduation rate.

It's been two years since the Lafayette Public Education Stakeholders Council came together and later crafted its bylaws. Six months ago, someone started listening. 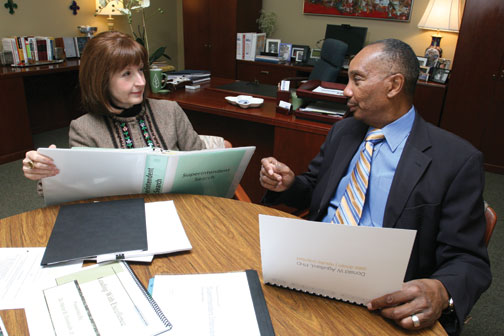 Nine civic groups have been speaking up for the silent voices who slip through the cracks in Lafayette's public education system, and a majority on the school board are listening. By Heather Miller

When nine local civic groups coalesced to face the state of public schools in Lafayette Parish, their message was as emphatic then as it is today: Toss the notion that our poorest kids can't learn. We can't - and won't - wait 30 years for a sizable increase in our high school graduation rate.

It's been two years since the Lafayette Public Education Stakeholders Council came together and later crafted its bylaws. Six months ago, someone started listening.

The sleepy meeting agendas of the Lafayette Parish School Board have breathed new life as board members work toward the selection of a new schools superintendent, a decision expected by early December. If the past six months of board activity are a sign of what's to come, LaPESC has a number of reasons - namely five - to hope that better days are ahead in Lafayette Parish schools.

The search for a new super has created a 5-4 cleft of the Lafayette Parish School Board, a divide that's been well-documented ever since Superintendent Burnell Lemoine announced in May that he would retire at the end of this year.

It was then that five board members, Hunter Beasley, Kermit Bouillion, Tehmi Chassion, Shelton Cobb and Mark Cockerham decided beforehand they would not vote to extend Lemoine's contract and informed Lemoine of their decision before the start of the meeting. In the days following that May board meeting, the five board members came under scrutiny for an unintentional violation of open meeting laws: Board members cannot legally discuss their voting intentions outside of a public meeting.

But what wasn't widely reported is that their actions were based in part on the wishes of the 5,000-plus outside stakeholders that belong to LaPESC. Those stakeholders believed that a vote to extend Lemoine's contract was a vote in favor of the status quo. New leadership in Lafayette Parish schools was long overdue.

Margaret Trahan and Chip Jackson of the Lafayette Public Education Stakeholders
Council participated in the interview process for the next superintendent of
Lafayette's public schools.  LaPESC believes the right kind of bold leadership in the
Lafayette Parish School System will advance policies that help the most at-risk
student learn and graduate on time from high school.

The nine organizations that comprise LaPESC are the705, 100 Black Men of Greater Lafayette, Citizens Action Council, Concerned Citizens for Good Government, the Greater Lafayette Chamber of Commerce, State of Greater Black Lafayette, Southwest LA Black Chamber of Commerce, United Way of Acadiana and UL Lafayette. The Lafayette Parish School System was a member at the outset but withdrew its membership after LaPESC began planning candidate forums for board elections (LPSS actually announced its withdrawal to the media before letting LaPESC know it was pulling out).

LaPESC pledges in its bylaws a "common commitment ... to identify roadblocks to educational attainment for children living in poverty, who are mostly African-American, and to advocate for solutions to those barriers."

When the school board began outlining the protocol for selecting Lemoine's replacement, LaPESC and the 100 GBM asked for a voice in the process. Beasley brought the request before the board, a proposal that was met with staunch opposition from board members Mark Babineaux (who serves as board president), Greg Awbrey, Tommy Angelle and Rae Trahan.

But the new majority that's prevailed on the board outweighed the wishes of the minority four. With yes votes from the same five board members who set the wheels in motion to find a new superintendent, representatives from both civic groups were able to sit in on the superintendent interviews and recommend their top three candidates - despite a second attempt by Awbrey to question the legality of outside stakeholders participating in the process.

It's the same five board members who also saved the application of Dr. Pat Cooper, one of 10 superintendent applicants selected by the board to be interviewed for the position.

When it was discovered that if selected for the job Cooper would be unable to start full-time until May 2012, Babineaux circumvented what should have been a very public discussion by the entire board.

With the help of LPSS Marketing Director Angie Simoneaux, Babineaux relayed a message to Cooper that the board's wishes are for the new superintendent to start in January. That phone call was made without any formal meeting or vote from the board ever taking place, though board attorney Jimmy Simon had previously advised a full board meeting to decide a course of action.

A few days later, the "gang of five" fought back against the behind-the-scenes maneuvering of Babineaux. Another 5-3 vote of the board (Awbrey was absent) brought Cooper's name back into the running.

Coincidentally, Babineaux and board member Rae Trahan did not vote for Cooper as one of their top 10 candidates. Angelle was absent for the vote due to an unavoidable family conflict.

Cooper seems to be the top choice for both LaPESC and 100 GBM (while the two groups did not rank their three finalists, evaluations of the top three in LaPESC's and 100 GBM's respective press releases last week appear to favor Cooper). He's also been pegged by The Daily Advertiser as the frontrunner for the job.

Perhaps the most perplexing proof of a steep split in agendas for the school board came in August, when The Daily Advertiser sent out surveys to board members asking them to rank a list of priorities for the school district. The majority five filled them out, but Angelle, Awbrey, Babineaux and Trahan refused to return the surveys.

Board member Trahan told the daily she was too busy with other work commitments, also spouting that the other board members who completed the surveys "couldn't walk a week in my shoes."
Babineaux countered that the issues outlined in the survey were "agenda-oriented" and "blatant propaganda."

What's clear in this superintendent search is that the community has spoken - and the "gang of five" is listening. What's not clear, however, is why the remaining four have yet to jump on board.

As board Vice President Cobb said during a recent board meeting, "We need to start acting like we're together, or we'll [experience] defeat."

Our kids are with you, Mr. Cobb.