UL football coach Mark Hudspeth broke down his formula for success Tuesday at The Independent Lecture Series luncheon at the Cajundome Convention Center. 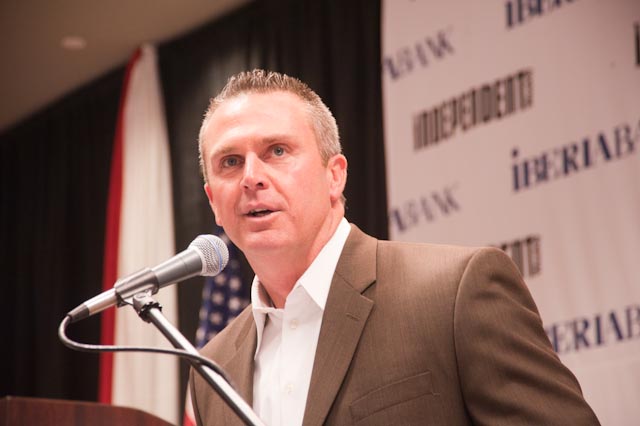 UL football coach Mark Hudspeth broke down his formula for success Tuesday at The Independent's Lecture Series luncheon at the Cajundome Convention Center.

But Coach Hud's lunchtime message wasn't limited to football. Quite the contrary, the uber-energetic Ragin' Cajun coach told a wide-ranging group how the formula that has resurrected the UL squad can be applied to any facet of life.

All one has to do is understand the concept of "The Rope," "The Juice" and "Protecting the House."

The Cajun team has embraced those concepts, Hudspeth said, and because of that it's now 8-3 with a double-digit-win season still a possibility, and on its way to a first-ever Division I bowl game. Not many would argue, since UL finished up a 3-9 season less than 12 months ago.

And the coach hammered home the point that such a turnaround and that kind of success is possible outside of football, by using the same principles.

"It's the same thing in life," he told the gathering, part of The Independent's year-long series of guest speakers. "With jobs and families, there's a lot of tough times. But you've just got to keep holding onto the rope, and it becomes a lot more special when everybody hangs on and everyone pulls it together."

"The Rope" made its debut when Hudspeth held his first official team meeting last January, a 10 p.m. gathering on the turf at Cajun Field. Hudspeth provided the rope, and his team and staff went through their paces in a series of tug-of-wars.

"Then, we got everybody on one side of the rope and pulled, and it just flew down the field. That's the concept we use. We get everyone pulling the rope in the same direction."

"The Rope" has been a part of the UL program since that first team meeting, most notably in home and road locker rooms prior to and after games. But figuratively, it's encircled the whole program, including the Cajun fans and followers.

"The people here put their trust in us, back in January when we didn't have anything to show them and hadn't given them anything," he said. "We started out number 120, and how many Division I programs are there? 120. But the people here said they'd grab the rope with us, and when you get everyone all pulling together in the same direction, that's when you see results."

Hudspeth cited several late Cajun wins three of them coming in the closing moments that helped UL finish with a perfect 5-0 record at Cajun Field this season. Hence, "protecting the house."

"We set a goal of winning every home game," he said. "I'm a firm believer in that you get what you emphasize. If you do that, you're going to get results, no matter if it's football or life. But it's got to be important to you."

In order for the Cajuns to hang onto "the rope" and "protect the house," Hudspeth said they needed something else when they began preparations for the 2011 season. They needed "The Juice."

"We talk about juice all the time," he said. "You have to have the juice in everything you do."

"The Juice" is symbolized by a large music blasting system that is on hand at all team activities, most notably at practice when it pipes music across the entire Cajun practice complex. But it's more than music, Hudsepth told the crowd.

Hudspeth said the philosophies were needed to give the program a kick-start.

"Changing the nameplate on the door isn't going to be enough for the job," he said. "We knew it was going to take everybody. But if everybody's pulling the same rope and has the same goals, it's amazing what can happen."

An 8-3 Cajun football team, and a bowl-game trip? Amazing might not be a strong enough word.