The new dish to try downtown is at Guamas. Its Cuban nachos are new in every way.

Guamas was one of the only Latin restaurants in Lafayette when married owners Julieta Tarazona and Rueben Mesa opened the original location off St. Mary Street near campus. It makes nine years this April that Guamas moved to its downtown location at 302 Jefferson St. tantalizing the uninitiated and the regulars alike in South American and Cuban cuisine.

The new dish to try downtown is at Guamas. Its Cuban nachos are new in every way. 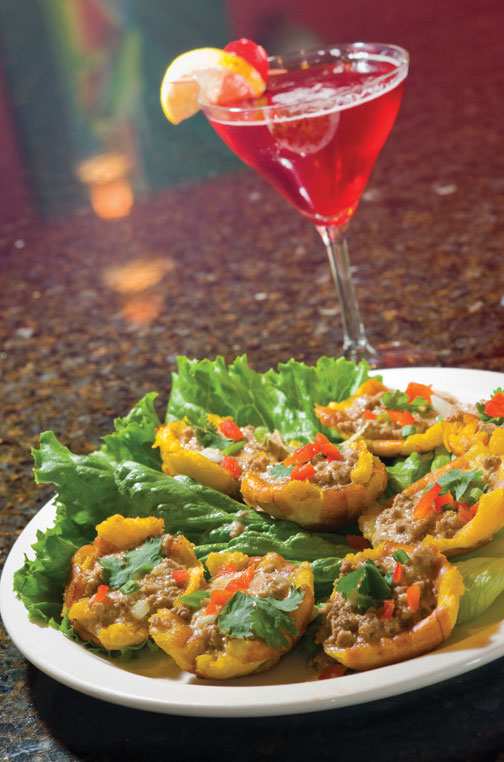 Guamas was one of the only Latin restaurants in Lafayette when married owners Julieta Tarazona and Rueben Mesa opened the original location off St. Mary Street near campus. It makes nine years this April that Guamas moved to its downtown location at 302 Jefferson St. tantalizing the uninitiated and the regulars alike in South American and Cuban cuisine.

It's got a terrific menu, but you have to try the new Cuban nachos, which are unlike anything else being served anywhere. First, plantains are sliced and fried in a cup-like mold. This is an ideal use for plantains because they are firmer and have a much lower sugar content than their cousin, the banana. Plantains aren't eaten raw as often as they are used in cooking. Guamas has long had fried plantains on the menu but never in a dish like this.

The cups are then filled with a picadillo, a Latin way to cook ground beef; think of it as the Latin form of hash and it changes region by region. It's almost always used as a filling in something like tacos or tortillas and often it has potatoes, although not in Guamas' recipe. The Cuban version is usually flavored with cumin, garlic and onions and can have a bit of stock of tomatoes thrown in. It is slowly sauteéd down with its spices to form hearty, flavorful morsels.

The picadillo then fills the cups and is topped with diced bites of tomatoes and red onions with Guamas' own version of a garlic-laced sour cream tossed in to make the picadillo even tastier. Despite all of that, this is not a heavy meal. A serving comes with four of these plantain cups, and while four certainly make a meal, two very hungry people could split it and still have appetite enough to order entrees. You can ask Guamas to 86 either the tomato or red onion, but as someone who hates raw tomatoes, even I liked having the sweet ripe nips of that fruit in the dish. Each cup is garnished with cilantro, which of course if you are a cilantrophobe, like even the great Julia Child was, you can ask that to remain off, too.

How did this come to be on the menu? Turns out owner Mesa has been keeping it in the family. "I think Rueben has always made them for the family and we make fun [of him] because we say they taste like nachos," says Tarazona. When eating at other restaurants and noticing the deep fusion trend, which by now isn't so much a trend as it is a reflection of our global times and influences, the couple realized this dish reflected that notion. "We don't want to take the name nachos out of the Mexican culture, but it's an American name for the dish. The difference is that instead of corn, we use plantains." The dish's name is in honor of Mesa, who is Cuban.

This dish is so new it has yet to make it onto the official, printed menu, although you can ask for it.

Guamas is slowly revamping its menu. "We'll introduce more new dishes, little by little," Tarazona says. Frequent customers can expect their favorites to remain on the menu while new edible ideas are introduced. The Cuban nachos have yet to get a set price, but it will definitely be under $10. Try them out next time you are at a function downtown, and don't forget to order Guamas' amazing coffee with its tres leche for dessert.