State and city obscenity laws are being applied against a number of local retailers. 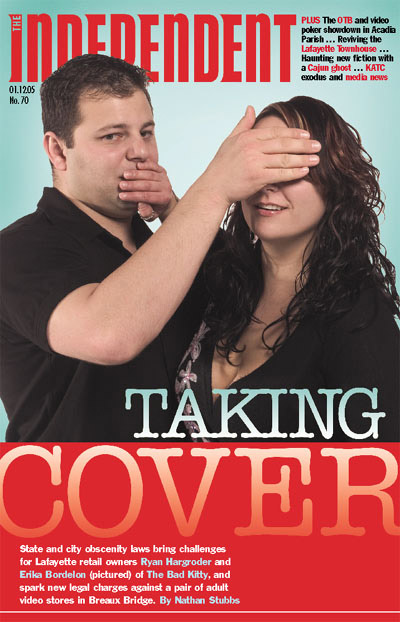 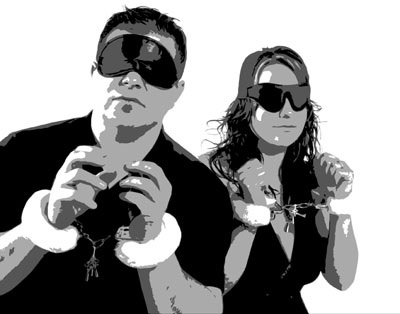 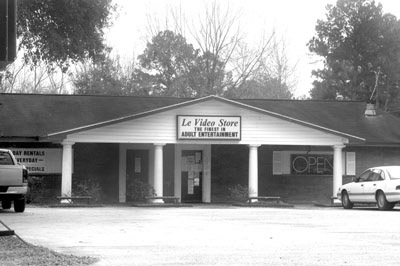 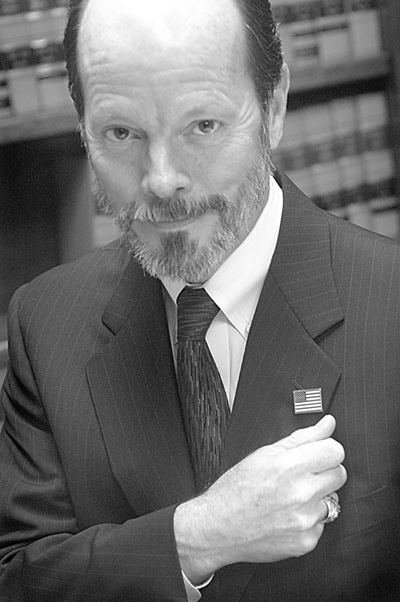 When Ryan Hargroder moved back to Lafayette from San Diego a few years ago, he and his wife Erika Bordelon didn't exactly receive a warm welcome when they opened their Jefferson Street shop The Bad Kitty in April 2003 and started selling sex toys and pornographic DVDs.

"I didn't think that I was doing anything criminal to the point where they were going to file felony charges against me," he says. "That was what kind of shocked me."

Just a month after The Bad Kitty's opening, city police entered to confiscate roughly 200 DVDs worth $2,000 that Hargroder had just restocked in his store. A year later, District Attorney Mike Harson filed obscenity charges against him, though Harson has recently indicated he won't be pressing charges on the condition that the Bad Kitty no longer tries to sell videos. Officials have said the DVDs will be burned.

In his tiny office, which maintains the store's décor of hot pink walls and leopard print carpet, Hargroder still keeps a copy of the city's obscenity ordinance and his arraignment notice tacked on a billboard above his desk as a reminder of his plight.

"What we thought, coming from other places, is that it was all part of the same industry ' with the vibrators and stuff like that," he says. "We thought it just was something that went together. It wasn't like we were trying to do what they were doing on the Breaux Bridge Highway here."

Across the parish line on Breaux Bridge Highway, selling pornographic videos has been the norm for almost 20 years. However, this could change based on fresh obscenity charges filed last month by District Attorney Phil Haney's office in St. Martin Parish.

Two adult video stores ' Le Video and Video Place ' along the Breaux Bridge Highway were scheduled for arraignment on the charges last week. Video Place owner Edward Burleigh pled not guilty to his charges and is scheduled for trial in June. Le Video owner Emmette Jacob Jr. was granted a continuance based on scheduling conflicts with his attorneys, William Goode of Lafayette and Joseph Obenberger, a First Amendment lawyer from Chicago who specializes in adult entertainment industry cases. Jacob is now set for arraignment on Jan. 20 and plans to plead not guilty.

Burleigh did not return calls for comment, while Jacob referred questions to Goode.

St. Martin Parish prosecutor Chester Cedars says the obscenity charges originated from information the sheriff's office received about the video stores selling pornography to minors. A sting operation last summer brought charges of "distribution of material harmful to a minor" on a handful of clerks from the two stores. After reviewing the confiscated tapes, Cedars said the material was more than just offensive for children.

"I realized that we had more than a distribution of materials harmful to minors charge ' that the material met the legal definition of obscenity," he says.

While selling to minors only brought fines on the individual clerks, an obscenity charge is levied against the owner of a business and punishable by a fine of $1,000 to $2,500 coupled with six months to three years imprisonment.

Obscenity is defined by state law as material, taken as a whole, that the average person applying contemporary community standards would find appeals to the prurient interest, is presented in a patently offensive way, and, lacks serious literary, artistic, political or scientific value.

After St. Martin Parish officials had evidence of the stores selling videos to minors, they widened the scope of the investigation and sent in more undercover agents to collect materials. They were distressed by their findings.

"There's no design, there's no plot, there's no motif," Cedars says of the video evidence. "This is pure hardcore unadulterated sex. We've even got one video of a woman having sex with a horse. I don't think there's any doubt that we'll be able to prove that the material obtained is obscene according to the community standards of St. Martin Parish."

Le Video Store and Video Place have both operated for almost two decades on the Mills Highway, more commonly referred to as the Breaux Bridge Highway since it serves as a prime connector of Lafayette and Breaux Bridge. At Le Video Store, authorities say guests can pay to go into viewing booths where they can choose from a catalog of sex scenes to watch. The store also has a drive thru window for patrons to pick up merchandise.

Cedars agrees that the two stores have chosen their location for a reason. "It's more than merely coincidence that both these businesses are located close to the parish line," he says.

District Attorney Haney says that prior to the recent obscenity charges filed against Le Video and Video Place, no investigation or complaint had ever been brought to his attention regarding the adult video stores, but he is still confident in winning convictions in these cases.

"We are mindful of the fact that everyone has a First Amendment right," Haney says. "But there's a law on obscenity, and I think that community standards are clearly defined. We can look at something and see if it is obscene or not; I'm elected to do that job and that's what I'm doing."

Still, while Breaux Bridge may have recently risen up against pornography, no complaints have been filed over the videos sold at Sinsations in New Iberia, also within Haney's district. Sinsations, a sexual novelties shop, offers about 600 different VHS titles and 300 DVD selections and has been open for about five years on the corner of Admiral Doyle Drive and Center Street, one of the city's busiest commercial intersections.

In Lafayette, District Attorney Harson says he recently dealt with The Bad Kitty the same way he has handled other hardcore sex video dealers in the past. About three years ago, he says a few stores in Acadia Parish began selling pornographic videos, including the now-defunct Acadiana's Adult Superstore, just off I-10 near Egan.

"Essentially I put the proposition out to all of them that if they all stopped the sale of the tapes, we would not go any further [with the charges]," Harson says.

With The Bad Kitty, charges originally came from the Lafayette Police Department before being transferred to Harson's office for prosecution. Lafayette has an obscenity ordinance identical to the state law. Harson says he typically draws the line on obscenity with hardcore videos because the films typically include nothing but pornography.

"It goes to the overall content [provision in the law]," he says. "The problem with the magazines is they've also got a lot of literary articles in there. You wrap it up nicely enough I guess you can get it by. But if you take it as a whole and it's nothing but hardcore sex, it crosses the line."

The Bad Kitty's Hargroder sees no difference between the videos he was selling and what is routinely sold at various convenience stores and newsstands in Lafayette.

"The law's written so vaguely that it's up to the discretion of the person what's obscene," Hargroder says. "You take that into account and that there's [pornographic] magazines all over at every gas station. So, we said, 'Yeah we're going to go ahead and do it.' We thought it was no big deal."

Prior to selling the videos, Hargroder says he even had a local attorney ' whom he declines to name ' advise him that it would be legal. He says adult video sales are a potentially lucrative business, with typical markups of at least 400 percent. Hargroder never had the chance to build up significant sales revenue from the videos, but his business is now growing significantly without them. He's even looking to add more traditional inventory, like Valentine's Day chocolates.

"We're trying to not be what the stereotype of a sex store is," he says.

Still, Hargroder believes he should have the right to sell his videos, even though he's not willing to legally challenge it.

The young entrepreneur says he's not ready to risk his entire business over its right to sell adult videos. Another 28-year-old businessman, Dan Sasha Birman, recently left Ruston after selling pornography at his store, Fantasy Video. In April of last year, a Lincoln Parish jury found Birman guilty of violating state obscenity laws. To avoid jail time, Birman agreed to seven stipulations set forth in his plea agreement, which included closing Fantasy Video and pledging to remain out of the porn business. Birman is now pursuing a restaurant venture in New Orleans. The Lincoln Parish Police Jury is considering a 37-page ordinance designed to strictly regulate anyone who may decide to open a sexually oriented business in its community again.

"It was enough intimidation for me that I wasn't ready for a legal battle," he says. "I wasn't interested in opening the business to do that. I just wanted to have this type of business in Lafayette that obviously people are interested in. I'm not out crusading to make stuff legal. Not yet."