Despite the concerns of a museum support group, UL Lafayette plans to promote the University Art Museum's interim director as its new director. 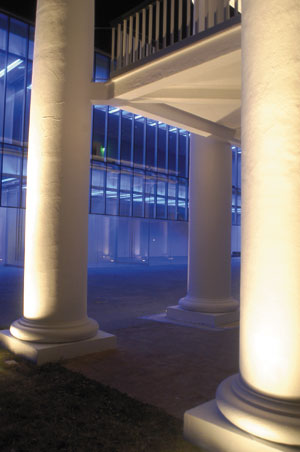 Paul Hilliard hasn't visited the museum that bears his name since former director Herman Mhire resigned in September 2005. "I'm not happy with it, and I'm not very optimistic about it," Hilliard says, "and I'm a very optimistic guy. It seems to be hanging in limbo. Nothing's happening. There's no more first-class exhibitions and no curator. A museum without a curator ' is that a museum or just a storage area, or an arts and crafts tent show?"

The President of Badger Oil, Hilliard and his late wife Lulu were initially enlisted by Mhire to provide a financial foundation for an $8.5 million, 33,000-square-foot expansion of the University Art Museum on the campus of UL Lafayette. The Hilliards first pledged $3 million for the project and later increased it to $5 million. But Mhire resigned as director last year, after a contentious disagreement over an exhibition of Martelé silver ' owned by local attorney Robert Shelton and his wife, Jolie ' put Mhire at odds with both the Sheltons and UL President Ray Authement.

In Mhire's absence, deputy director Mark Tullos was named interim director. Tullos is now slated to become the museum's director, and the university will soon conduct a national search for a curator who will work under Tullos' direction. But it's Tullos' appointment, made without a national search for the position, that frustrates museum supporters who say UAM is heading in the wrong direction.

The Curator's Circle, a group of private residents organized to provide financial support for the museum's exhibitions, was an ardent supporter of Mhire and his efforts to secure high-profile art exhibitions for Lafayette. Despite having little to no budget for exhibits, the Curator's Circle raised $56,000 for the Robert Rauschenberg exhibition in May 2005 and arranged for the exhibit to travel the country, at no cost to the university, generating $65,000 in income for the museum.

With Mhire gone, the group's now concerned with Tullos' ability to lead the museum. In a letter to Authement in mid-September, the group expressed its concern: "the search for a 'Curator' which you have planned will, in fact, be a search for a new Deputy Director of the Museum once Mark Tullos is established as a Director." The group encouraged Authement to conduct a national search for a new director and to allow Tullos to submit his application.

Authement replied in a Sept. 20 letter that he intended to appoint a curator as an academic appointment and then hire a consultant to evaluate the museum and help with the museum's accreditation process. Authement said that Tullos had been tapped to direct the effort due to his past experience with gaining the seal of approval from the American Association of Museums. "He has the expertise and experience needed to lead the accreditation process," Authement wrote.

In the past 20 years, Tullos has been employed by six museums, including UAM. Of those six institutions, two were accredited. The Art Center of Waco, Texas, was already accredited before Tullos worked there, and during his eight-year tenure as director of the Alexandria Museum of Art, Tullos helped AMA earn accreditation.

Kay Doré, president of the 60-member group, the Curator's Circle, isn't happy with Tullos' appointment. "We're concerned that he will be named [director] arbitrarily," she says. "What we're asking is that a search be made for a director that has a background in fine arts, possibly with a master's [degree] or a Ph.D, and that his application for the job would go through an established search committee." Tullos has a bachelor's degree in fine arts from LSU, and although he conducted graduate studies work at Stephen F. Austin State University, he doesn't have a master's degree.

UL Vice President of Academic Affairs Steve Landry is confident in Tullos' abilities. He says Tullos' 20 years of experience and "a couple of good years here of excellent performance" qualify him for the position. "And he's an at-will employee," Landry adds. "So if at some point in the future we became dissatisfied, we do what we do with at-will employees and make a change."

Doré contends that Tullos has shunned the efforts of the Curator's Circle. When the group attempted to purchase museum memberships for its members, at a cost of more than $3,000, Tullos would not accept the money. Instead, he asked Landry to turn the matter over to the university's attorney to determine how to handle the money and make a recommendation to the museum's governing board.

"We need to sit down and craft some sort of mutual agreement of how our relationship works," Tullos says. "That's one of the criteria with the accreditation program. With all entities that are affiliating with or supporting the museum, there needs to be some crafted document that says this is who we are and this how we work and this is the process we go through to support the mission of the museum. We haven't done that yet." He adds he's been "very anxious" to meet with the Curator's Circle to draft such an agreement, but Tullos says the group hasn't been actively involved with the museum since the Rauschenberg exhibit.

Elemore Morgan Jr., a Curator's Circle member and retired UL visual arts professor, says that's not entirely true. "There's been contact," he says, "but it hasn't been very productive or very pleasant. We tried to be objective, as well as we could, about him and about the museum and to maintain relationships with the university. I had personal contact with Tullos, Landry and Authement."

Morgan is concerned that without long-term planning and goals for the next 25 years, the university's vision for the museum is short-sighted and a blueprint for mediocrity. "Are we setting this thing up, heading in the right direction?" he asks. "That's why I would like to see if we can't find the very best person [for director], whoever they may be. If they do a search, and Tullos comes out to be the right person after all, he's the best candidate we've got, then fine. I'll accept that. I would love to be wrong about my apprehensions about Tullos. I would love in two years from now to know that the guy really has done a good job. I'll be the first to congratulate him, and say, 'Man, that's great.'"

Both university officials and members of the Curator's Circle want to see the university museum accredited by AAM. The Curator's Circle believes UAM won't earn accreditation because the museum's current governing provisions give the university overreaching authority over the museum. The university intends to hire a consultant to guide the museum through the process. To complicate matters, there is no definitive set of standards for how a university art museum must be structured in order to gain accreditation. Instead, there are only guidelines used to determine whether an institution can be accredited. AAM spokeswoman Anna McAlpine says each museum's unique circumstances are taken into consideration during the accreditation process.

Doré has a hard time understanding why the university is looking to hire a curator, then hire a consultant to work toward accreditation. "Why not get the accreditation paperwork right, and then once we fit everything, let's go out and look for a director?" she asks. "To find a director is going to be kind of awkward, considering that there's no budget for exhibits. But at the same time, our hope is that we can find someone willing to come on and take a chance with us."

The museum's five-year plan, "Vision 2010: A Campaign for Excellence," outlines the museum's priorities as fund-raising initiatives, earning accreditation from AAM, expanding services and programs, establishing endowments, and building its permanent art collection. The main goal is to clear UAM's remaining $3 million debt for construction of the facility. Within the last year, the museum has managed to obtain pledges of only $78,000.

The goal of the five-year plan, Tullos says, is for the museum to become "a beacon, an example of what a university art museum can truly be in a community like Lafayette, a public gathering place for every type of person in society, not only the well-heeled, but those of lesser means feel welcomed and are participating in the programming ... I think within the next five years we're going to see a vibrant, community-based public gathering place that's respected both locally and nationally for presenting compelling exhibits and programs, incredible scholarship that's well-funded and endowed, and has a balanced perspective on who its various audiences are."

Mhire's original vision of securing high-profile art exhibitions is giving way to a vision that focuses on the university's student body and faculty. "We've moved in that direction here," Landry says. "We want our visual arts student with their senior projects to have the key opportunity to be able to do their exhibits in part of our facility." Ironically, this fall semester's art exhibit for the university's senior art majors was held at the Acadiana Center for the Arts, due to a scheduling conflict that wouldn't allow for the show at UAM.

Landry says a long-range strategic planning committee made up of community members and museum representatives has been reviewing the museum's mission statement and governing provisions and has refined the language. "We should serve the students and faculty of the university as we serve our larger community and become as effective as we can at providing stuff for the citizens of this region and attracting and supporting citizens outside of the region ... It's not a retrenchment, but a refinement of what we say our vision is."

There's still a role for the Curator's Circle within that refined vision, Landry adds. "I think we have a lot of well-intended people all seeking to advance the museum in the best way possible, for both the community and the university."

"We really are in a sense doing what university art museums do for one of their most important audiences ' their students and their faculty," Tullos says. "But that's not to say we don't want to involve the community because we've got a membership program. We hope to build that audience as we move forward and hopefully see that increase. So I don't know if we have a change of vision for trying to present important and significant exhibitions."

Morgan fears the new direction and leadership of the UAM is too restrictive. "A university art museum is manifold," he says. "It's multi-layered. They have to be several things. They have to take care of the university people. They've got to give student shows and faculty shows, but they also have a wider range where they deal with their whole regional community, and they attract support from people who can not only give money but who can bequeath art. That's how the [permanent] collection builds. It could become a regionally important museum focusing partly on our part of the world."