After 37 years, a venerable Acadiana oyster house closes its doors. 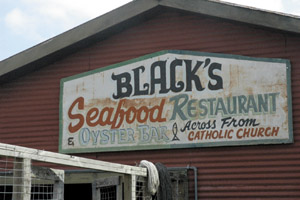 On a chilly Saturday evening in mid-November, there are 20 parking places open in front of St. Mary Magdalen Church in Abbeville, right across the street from Black's Seafood Restaurant. In past years, that scenario was unthinkable. Oyster season is in full tilt, and throngs of diners from Lafayette and the surrounding area head to the three oyster houses of Abbeville ' Black's, Dupuy's and Shucks!. And hungry customers banging on the darkened windows of Black's cannot believe the venerable seafood restaurant has closed its doors.

"You gonna open this up?" Reese Place asks Bryan Bourque, who has stepped to the door to answer the insistent knocking. Bourque's family has run Black's for 37 years.

"It's heartbreaking," Place says. "I decided to come out of the woods, and you're still shut."

Black and Rena Bourque opened Black's in a small hole-in-the-wall shop on Rue Pere Megret in 1967. They bought their oysters on Grand Isle, making the drive several times a week to haul in sacks of briny Barataria Bay bivalves. Their son Bryan grew up on the sharp scent of fresh seafood mixed with the sweet popping of cornmeal sizzling in oil as his parents fried their signature catfish. The restaurant quickly became an Acadiana tradition, and crowds lined the sidewalk, huddled in coats and conversation while waiting for tables inside the cozy dive.

Bryan Bourque took over in 1982. Right down the street was Landry's Big Department Store, a handsome two-story brick building. It had once housed a carriage shop before it became a clothing and hardware store. Bourque bought the building in 1988 for $125,000. Every night at 9 p.m., after Black's shut down, he and a friend, Brent dAugeraux, went to work paneling the walls with cypress, refinishing the distinctive cast iron columns and constructing a bar so beautifully conceived that it would become a classic from the day it opened.

The new Black's, 16,000 square feet of restaurant, opened June 4, 1989. "We never had a chef," Bourque says. "We never needed one." The menu was straightforward seafood ' salty raw oysters, fried catfish, shrimp, oysters, softshell crabs, gumbo, étouffée, french fries and beer. Bourque made the bi-weekly run down to Grand Isle himself and developed a separate wholesale seafood business, Black's Seafood Market. After nearly 20 years, he started to burn out.

"That's when I hired Mike [Frederick]," he says. Frederick, by everyone's account, is a talented chef. He ran his own restaurant, Cane's in Abbeville, and also worked for the late James Graham at Lafayette's, Rosemary Parisi at Parisi's and Ema Haq at Bailey's. "Mike's self-taught," Parisi says. "He's extremely creative."

Frederick put duck kabobs on the menu. He added seafood Provençal, prime rib, crab cakes, and expanded the fish offerings beyond catfish to grouper, trout and flounder. "The first year his revenues were up 30 percent," Bourque says.

Part of Bourque's arrangement with Frederick was that the chef had first right of refusal should anyone make an offer to buy Black's. In 2004, a group of investors approached Bourque. He was ready to sell and informed Frederick of the impending deal. "I thought he'd say, 'OK,'" Bourque says. Instead Frederick exercised his option and bought both the business and the building for $1.3 million in August of that year. Bourque kept the wholesale operation.

Hurricane Rita hit in September 2005. "The hurricane knocked out all of his regulars from Delcambre, Henry, Erath, Forked Island, Pecan Island," says Bourque. "There goes duck season. Everybody goes through Abbeville to go to the islands to hunt, and they all stopped at Black's. The oyster beds were closed from September to December. The crawfish were killed by saltwater intrusion."

The lack of cash flow ultimately shut Frederick down. "It's a big building," Bourque says. "You got to keep that building full. You're paying insurance. The electricity is $4,300 a month. Mike struggled. When you don't have the cash flow to meet your payrolls you start cutting back, things start to suffer, it hurts service. And the people [Black's regular customers] didn't have money. They were more concerned about fixing their houses. What are you gonna do, eat oysters or put on a new roof?"

Bourque was selling seafood to Frederick. "When the decline in ordering came, I knew something was up," Bourque says.

Frederick could not be reached for comment for this story.

Abbeville locals had also noticed a change at Black's. CPA Lloyd Doré, whose office is across the street from Black's, says the usually brisk service deteriorated. "I came in with a visitor from France one day, the dining room wasn't full, but no one came to seat us. Finally we got a table, and then we just sat there. We flagged down a guy, he wasn't even a waiter. I think he was one of the cooks. We ordered drinks and some charbroiled oysters. He brought the drinks, went in the kitchen, and I think he made the oysters himself and brought them back out. There wasn't any silverware on the table. He looked in the silverware basket, then came over and apologized and said he'd have to go in the kitchen and wash some."

Attorney Charles Sonnier, with offices on Magdalen Square, had an open account at Black's. "It's where I took customers," he says. "It was a real economic boom for Abbeville. Not only that, I miss it. Mike Frederick is a great chef, but he closed a fine restaurant."

"From what I understand," Doré adds, "Dupuy's sort of misses it, too." Dupuy's is across the street from Black's, and customers who have driven in to Abbeville for oysters find themselves waiting in longer than usual lines there, or down the street at Shucks! "They're inundated," Doré says.

"[Mike] got discouraged and probably a little burnt out, then he stopped coming to work," says Bourque. In late August, Frederick signed the assets back over to Bourque, who relieved him of his debts. The doors closed Sept. 1. Bourque continues to operate the building as a catering facility, and his wholesale seafood business is thriving, delivering to 28 restaurants throughout Acadiana and selling retail from a location in Maurice.

Regarding Black's future, Bourque is interviewing potential buyers. "I'm waiting for the right person to come along," he says. "Someone who has the resources and wants to do it right. I'd like to see the same menu. I'll act as a consultant. I'm sure everybody will give it another chance, and we'll get back to the glory days."