The Lafayette Parish city is about to get a "substantial" bill from Lafayette Utilities System, and its wholesale contract with LUS could be in jeopardy.

The Lafayette Parish city is about to get a "substantial" bill from Lafayette Utilities System, and its wholesale contract with LUS could be in jeopardy. 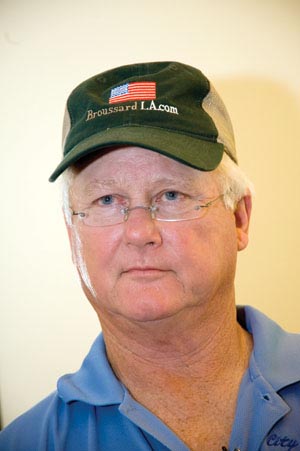 Langlinais' funny bone is being tickled from two directions: by the estimated bill Lafayette Utilities System says the city of Broussard owes for using LUS water for the last five years at a meter in Broussard that was bypassed, and by Langlinais' longtime foil, City-Parish President Joey Durel, who has squabbled with Langlinais most recently over disputed annexations along Ambassador South. Animus between the mayors is well chronicled; the cities of Lafayette and Broussard have even swapped lawsuits over annexations. So while Langlinais was recently made aware of the water meter issue, he thinks the sizable bill estimated by LUS has Joey Durel written all over it.

But for LUS Director Terry Huval, this is no laughing matter.

"It's a serious situation," says Huval. "We've never had something this serious occur on our system with a wholesale customer before."

The back story: In 2005, Broussard requested an additional meter be placed near where Camelot, a retirement community, was set to be built on Albertson Parkway in southwest Broussard. This was a growing sector of Broussard, and the city anticipated growth and an increased need for water in the area. Broussard paid for the meter, which LUS installed.

Municipal meters of this sort have two valves on them - one for the meter that allows the provider to keep tabs on the customer's usage and bill them accordingly, and a second valve that bypasses the meter. The bypass valve is there to prevent an interruption of water service in the event the meter needs to be serviced or replaced.

But, according to Huval, after the meter in question was installed, it was never put into service - the meter, in other words, wasn't turning. And that, according to the utility director, was because the bypass valve had been turned on and water was flowing into southwest Broussard free of the meter. And free of charge.

"You have to have the right tools and you have to have some know-how, so it wasn't just someone that went out there that didn't know what they were doing," Huval says. "They had to turn on the [bypass] valve."

Huval says LUS and LCG only became aware of the situation in the last month when Broussard requested an additional meter in another part of the city. Huval adds that LUS had been checking the Albertson Parkway meter periodically, but because it had been bypassed, there was no indication that Broussard was getting LUS water from that location. Huval estimates the line was bypassed in 2006. 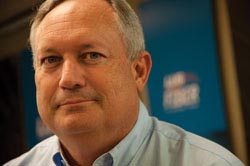 "For all that period of time they've been receiving [extra] water service from us without us being aware of it and without us billing them for that," Huval says. "Once we found out, we went ahead and put the meter in service and began watching how much usage they've had over the last month. And the amount of money they may be owing us is significant."

"I think maybe closer to $8,000," Langlinais says of what that estimated LUS bill should be, admitting in the same breath that specifics about the meter and the bypass valve are hazy. "I think there was little or no water pressure there so there was no, I don't know, I don't remember the details. All I know is [Broussard city engineer Mark Savoy] briefed me about it and I said, Well, clean it up and whatever we owe 'em, we owe 'em."

Broussard is one of several communities and waterworks districs in Lafayette Parish under contract with LUS for the purchase of water at a wholesale rate. In fact, upwards of 80 percent of the residents of the parish drink, cook and bathe with LUS water, although LUS itself is owned by the city of Lafayette. And these contracts between LUS and the wholesale customers are longterm - Broussard's doesn't expire until 2038.

"It was brought to our attention back in September that the meter had evidently not been put in service - the bypass had been turned on instead of the meter," recalls Savoy, one of the city engineers for Broussard. "I can't exactly answer what happened because it's not [Broussard's] meter, it's LUS's meter. And understand, this meter is in a lock box and the only one with a key is LUS."

Huval, however, says the meter in question is not in a lock box; since a special wrench and some know-how are required to work the valves, a lock isn't necessary.

Savoy estimates based on the wholesale rate Broussard pays to LUS for water, that an $800,000 bill would be for roughly 300 million gallons of water. "I don't know how much water they buy from LUS a year, but that seems kind of like a lot of water," he says.

Broussard has also had widely reported spats with neighboring Youngsville. Both small cities have scrambled to annex land along Ambassador South, a lucrative source of sales tax revenue in the not-so-distant future.

Youngsville's mayor, Wilson Viator, says the water issue between Broussard and LUS doesn't surprise him. He recalls his own run-in with Langlinais over water, one that almost escalated to fisticuffs. 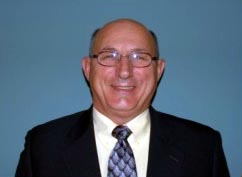 Viator says back in 2004, right after he was sworn in for his first term in office, Broussard attempted to tap into a 16-inch LUS water line off Hwy. 89 on Youngsville's side of the meter, meaning the water headed to Broussard would have been charged to Youngsville.

Viator says he personally went to the work site and threatened to have Youngsville police intervene if Broussard tapped the pipe, which at that point was exposed and ready to have a line added to it.

"[Langlinais] and I were both physically out there," Viator recalls. "I had to get in the hole and pull him out the hole... He finally backed off and left all pissed off because he couldn't have his way."

Viator, not coincidentally, is Joey Durel's brother-in-law. The acrimony between Lafayette, Broussard and Youngsville has always been a matter of brothers-in-law versus Charlie Langlinais.

Broussard's mayor insists there was no plot to steal water from LUS, and, when not chuckling about LUS's estimated - inflated, in his mind - bill, insists $800,000 is way out of line. 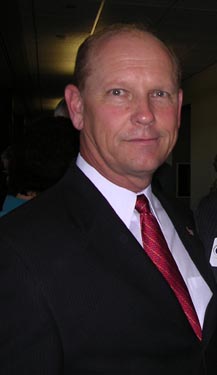 Savoy, who is employed by Grooms Engineering, an LUS subcontractor, believes the problem has to be on the provider end, not the customer end. "Broussard can't [access the meter]," he says. "In other words, LUS opened the bypass valve and closed the valve on the meter and didn't know they did it."

Durel, meanwhile, says whatever comes of this fracas with Broussard over water, the residents and businesses in Broussard served by the meter in question will not be cut off. But, he adds, the city of Broussard is still facing a substantial bill, and the use of the bypass valve - assuming LUS and LCG can establish that it was Broussard that activated it - compromises the validity of Broussard's wholesale water contract with LUS.

"They're going to have to pay the bill," Durel says. "But more importantly, that contract in my opinion ceases to exist. But we'll have to wait and see about that. The contract doesn't provide for anybody to take water for free. Anybody, based on any kind of common sense at all, would say this contract is breached and I think it'll open the door for a renegotiated contract."