New Orleans Bowl officials are anticipating their largest crowd in history, mostly because the Cajuns will be coming to town.

Paul Valteau and Billy Ferrante have been involved with the R&L Carriers New Orleans Bowl since it started in 2001, and they've passed out official invitations 20 times during that 10-game span.

But neither had seen anything like the reception they got Monday night, when they extended an official bid to UL's Ragin' Cajuns for the Dec. 17 contest in the Mercedes-Benz Superdome. 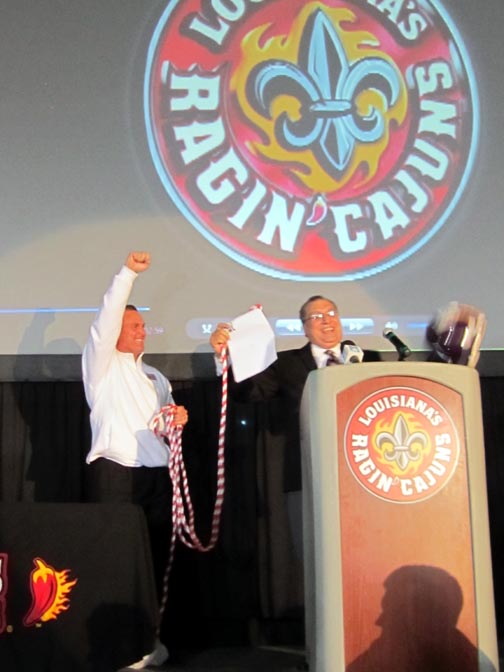 A crowd estimated at 3,000 showed up for what the Cajuns called their "Bowl Invitation Bash" held at the Moncla Indoor Practice Facility, only a few hundred yards away from the Cajun Field turf where this year's squad went unbeaten and drew all-time record crowds.

The Monday night turnout was a record, too.

"This was the greatest one of these I've been to," said Valteau, chairman of the Greater New Orleans Sports Foundation, the owners of the New Orleans Bowl. "We've done these in locker rooms and many other places, but in terms of support, showing the entire university and the entire community, it's the best I've ever seen. It made me excited."

"It's the most impressive I've seen by a long shot," said Ferrante, the bowl's executive director. "But for me personally it was what I expected. We knew with the excitement in the program and how the community has come out to support this team, tonight was exactly what we expected it to be. And we're expecting the largest crowd we've ever had for the game."

For Ferrante, it was a homecoming of sorts. Both of his daughters attended high school in Lafayette, and his older daughter was a Cajun cheerleader for two seasons.

"This is like a second home," he said, "so personally it's special for me."

Valteau made the official invitation to head coach Mark Hudspeth, whose squad is 8-3 overall heading into its regular-season finale Saturday at Arizona. And he did it by using one of Hudspeth's own motivational tools.

The first-year Cajun coach, who guided the turnaround from the 3-9 season of 2010, incessantly talks about "holding onto the rope," symbolic of both everyone pulling in the same direction and not giving up, or "letting go of the rope."

When Valteau walked to the podium Monday, he pulled out a red-and-white rope and handed one end to Hudspeth, telling him to hold onto it and pull it, "because at the other end of the rope is an invitation to play in the New Orleans Bowl."

And it was the envelope with the official invitation was on the other end. UL director of athletics Scott Farmer wound up with that envelope at the end of the gala/pep rally. 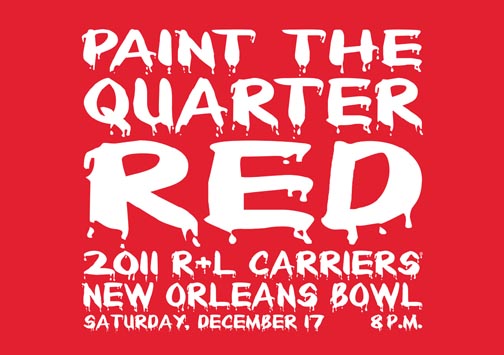 "That was pretty special," Farmer said of the themed invitation, "but it's that simple, just holding onto the rope. That's something that you can teach young people, and it's something the community has embraced as they've gotten behind us.

"We could have done this [the bid invitation] by phone and sent out a press release," Farmer said, "and that's how some schools do it. But that wouldn't have been fair to everyone who grabbed that rope 41 years and and haven't let go to this day. Tonight, and this whole bowl experience, is about all of us."

Farmer was referring to the Cajuns' last bowl-game appearance, the 1970 NCAA college-division Grantland Rice Bowl in Baton Rouge. The New Orleans Bowl will be the program's first-ever Division I bowl appearance, and the significance wasn't lost on Hudspeth.

"I want all of you parents here to grab your son or your daughter right now," he said to an enthusiastic crowd, "so that 15 years from now you can tell them they were there when the Cajuns were invited to the New Orleans Bowl."

Hudspeth said that Monday's invitation marked the second goal his team had achieved this season.

"Our first goal was to win every home game, and we were able to do that," he said. "Our second goal was to make it to a bowl game, and now we've accomplished number two. And we're going to accomplish our third goal, too, and that's to go and win a bowl game."

The Cajuns came up short of a fourth goal, that one winning the Sun Belt Conference title. UL finished 6-2 in league play and could finish as low as third in the final conference standings, but they will wind up with the league's second-best overall record and could tie for that honor with Arkansas State pending the results of the final weekend.

But it was the revitalization of the program this year, and the accompanying fan support an average of 29,171 per game for UL's five outings at Cajun Field that were the biggest factors in the Cajuns' selection, and not their final league standing.

"I came to games here the last couple of years when they weren't so good," Valteau said, "so I can get a good measure of the difference in what's happened here, the enthusiasm, and that's a testament to the community, the university and to those young men. We think we'll have a potential success just with the Lafayette crowd that we're expecting."

"We're expecting the largest crowd we've had," Ferrante said. "Bowl games are first and foremost about the student-athletes and we do everything we can do to make sure they have a good experience. But it's also about the fans coming down and having a good time, and I have every reason to believe that we'll have fans in record numbers."

Ferrante said the bowl has hoped for a day when the UL program would qualify for the contest as the Sun Belt's representative.

"When we started 11 years ago, when commissioner [Wright] Waters first floated the idea, we looked at the makeup of the Sun Belt, and we all said that [UL] was the school that makes the most sense. It's been 11 years in the making."

UL unveiled its bowl-game promotional logo  a "Paint the Quarter Red" poster next to New Orleans' traditional Bourbon Street road sign at the moment that Valteau issued the official bid. Moments later, Hudsepth threw down another gauntlet, just as he had before the 2011 season began.

"At the start of the year, I challenged everyone to pack Cajun Field and for everyone to bring two friends with them to the stadium," he said, "and you did that. Now the Superdome's a little bigger than Cajun Field, so now I'm challenging you again but this time, you've got to bring five friends with you.

"We want everyone to come down there as early as you can, and be a part of this. Just like this football team, you deserve this trip."