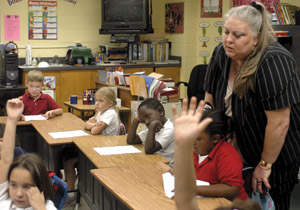 On the day school performance scores were released last month, Myrtle Place Elementary Principal Janice Moncrief organized a special early morning meeting to relay the results to her staff. Myrtle Place's performance score had shot up a district high 23.1 points ' news that met with roaring applause from the school's teachers.

In the case of Myrtle Place, where teachers had been voluntarily putting in extra hours to work closely with students on raising scores, the school's high score was a validation of the staff's hard work and dedication last year. But for many local educators, this year's performance scores aren't helping to clarify much. By and large, scores remained relatively flat, with a majority of schools failing to meet their growth targets. While the results are fueling some criticisms, many school officials say that, because of several unique circumstances at play last year, you can't put too much stock in this year's scores.

"I think there needs to probably be an asterisk by the scores," says Comeaux High Principal Joe Craig. "There were a lot of changes [last year], both planned and unplanned, that probably didn't help everybody's growth."

School administrators say a new standardized test, a change in the way the state compiles school performance scores, and the massive disruptions caused by hurricanes Katrina and Rita are all major factors that should be taken into consideration with the recent scores.

"It was a pretty difficult year last year for all school systems," says Phyllis Bartlett, the Lafayette Parish School System's director of accountability. "I think all that coupled together, the hurricanes, the movement of children in and out of the school system, the new test, the new calculation for the test. It was a stressful time for everyone."

The state uses performance scores to hold schools accountable to state requirements, as well as the federal benchmarks set by the No Child Left Behind Act. Scores are based primarily on standardized tests results (iLEAP and LEAP) as well as attendance and dropout records from each school.

Last year, in an attempt to streamline standardized tests, the state department of education required students in grades 3, 5, 6, 7 and 9 to begin taking the iLEAP test in place of the IOWA test and also adjusted the values of the LEAP and iLEAP tests in compiling school performance scores. Because of the changes, the state developed new "transitional baselines," which no longer counted the previous year's IOWA test results, for each school to mark its progress. "You can't really compare any of your scores to last year's," says Bartlett. "It's almost like starting over." In addition to those changes, the scores also reflect attenedance records and LEAP test results from a number of kids who transferred into new schools last year following hurricanes Katrina and Rita ' many of whom have since transferred back out.

The adjustments are particularly frustrating to some school officials who have been questioning the direction of the school district. "It makes it really hard to see any clear trends when the state goes and changes everything," says school board member David Thibodaux, who is trying to work with the state to convert this year's scores into something that can be more clearly compared with last year's. Thibodaux, a UL professor, says his independent analysis reveals that most scores are on the decline and he predicts that when the state's overall district scores come out in March, Lafayette will once again drop in the rankings (the parish currently ranks 22nd in the state).

Thibodaux expects that with four new school board members taking office in January, Superintendent James Easton will be under more pressure to produce results. "The scores speak for themselves," he says. "Something must be done."

Melinda Mangham, a veteran Lafayette High English teacher and president of the Lafayette Parish Association of Educators, says while area high schools appear to be struggling, many elementary schools in the parish, like Myrtle Place, are making great progress.

Mangham believes that new policies including block scheduling in high schools and the new state-mandated "comprehensive curriculum," which dictates much of the coursework to be taught in the classroom, are hindering high school teachers. "It's fine to have benchmarks," she says, "but when it becomes so prescriptive that there's no room for teacher input in the classroom [curriculum], it loses its effectiveness."

She adds that the schools with significant improvements this year were the ones that allow more flexible curriculums. "At Myrtle Place and J. Wallace James, they have energetic leadership, and the teachers were allowed to do their jobs. When the teachers took over, the scores went up dramatically."

This year, Comeaux High, which saw a less than one-half point rise in its score, was the only high school in the parish without a declining score. Given all the transitions from last year, Principal Craig says he was pleased his school was able to edge up its score at all "but of course you always want to do better." He says the jury is still out on many of the new programs in place in local high schools. "At one point, test scores were rising pretty high with the block scheduling, and now there tends to be a leveling off. Well, is that block scheduling, or is that the new test? Is that the curriculum? Is that the hurricanes? It's hard to say yes or no."

At Myrtle Place, Moncrief is starting to develop a reputation for raising perfomance scores, which also went up on her watch at her previous job at J.W. Faulk Elementary. While she's certainly proud of her school's results this year, she doesn't like seeing too much emphasis placed on any particular number. "You hate to say too much one year because you never know where you'll be the next," she says. "We all want the best for these kids at every school, and it's just a constant determination every day. This is just one test, and there's a lot more that goes into an education."