As communication systems broke down in the aftermath of Katrina, the media and government scrambled to keep everyone informed and in touch with mixed results. 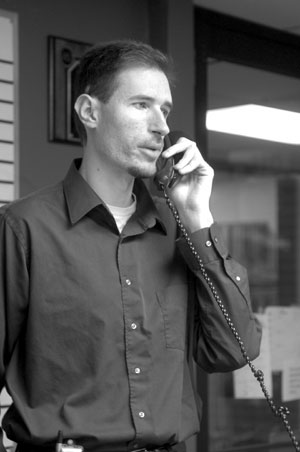 You can judge the size of the storm by the noise and pace of KLFY's newsroom. The phones are endlessly ringing. The fax machines are beeping with information. All around voices are rising and heartbeats racing. It doesn't matter that Hurricane Katrina made landfall more than 130 miles away from Channel 10; people fear the worse, and the aftereffects are being felt. As soon as a phone is put down, another call comes in. One person wants to know if her brother has made it to the Cajundome as a refugee. Another is worried about a relative that might be stuck on the upper floor of a submerged apartment building in New Orleans.

"Unfortunately, we don't have many answers for them right now," says C.J. Hoyt, the station's news director, just two days after Hurricane Katrina made landfall last week. Each call is handled, even though there are breaking stories of a catastrophic nature swamping the desk. On this day, newsmen are referring people to the Red Cross or Louisiana State Police – two agencies that had nothing more to offer than Hoyt's staff in the days following Katrina's introduction to coastal Louisiana.

Like other stations around the world, KLFY spent last week waiting for damage reports to come out of storm-stricken New Orleans and official briefings to arrive from the joint operations center in Baton Rouge. Many outlets, ranging from The New York Times to The Advocate, had teams of journalists in both locales, constantly shuttling information back and forth. A reporter in New Orleans would hear rumors of gunshots in the Superdome, then pass it along to their Baton Rouge counterparts for confirmation from the National Guard. Briefings in the Capital City would yield locations for search and rescue, and that would likewise be shuttled to the Crescent City via text messaging or satellite phone.

The system isn't perfect. Katrina is an unprecedented natural disaster from several standpoints, presenting many of the same challenges for reporters as 9-11 and the recent tsunami in Sri Lanka. As such, rumors are playing a questionable role in the reporting of the storm. In all the chaos, some news outlets have chosen to run with unconfirmed information, throwing it out there with a warning not normally attached to news: "This may be fact or fiction." A California paper reported a hostage situation in a New Orleans prison that was never confirmed. A cable news channel spoke of a shelter riot in Baton Rouge that amounted to nothing more than fabrication.

There was also news during the first week that will bloom over time as search and rescue dwindles: vandals attacking a Orleans hospital, failures to fix the levee system, officials calling for martial law even though it doesn't exist, how floating bodies were dealt with, conditions in the makeshift shelter of the Superdome. Even the first responders on the ground had serious problems with communications. More than 100 people in St. Bernard Parish died as they waited for food, water and other supplies, due to an inefficient system of passing word from person to person. Looters and rioters took over pockets of New Orleans as policemen were unable to call for backup – out of despair, a few turned in their badges late in the week and fled for higher ground.

The entire situation came in waves, sending officials and reporters scrambling for details every passing hour. Briefings at the joint operations center in Baton Rouge routinely yielded concrete information, although officials were careful about what was released and how. Roderick Hawkins, a spokesperson for Gov. Kathleen Blanco, spent the first week following the storm at the center. He says officials have tried to conduct brief huddles on delivery before briefings, but the pace has been frantic. Still, it was important during the early hours of the storm to treat information with care. "No matter where you are, or what you're dealing with in crisis management, the goal is not to cause panic," Hawkins says.

The practice was evident many times before and after the storm. As preparations were being made last weekend to use the Superdome as a shelter, Mayor Ray Nagin warned residents not to use the refuge if possible. The electricity would surely fail, he explained, and it would become uncomfortable. Officials in Baton Rouge whispered there was another underlying message: "We don't know if the Dome can sustain this storm at all." As pieces of the roof blew off when Katrina entered the city, those concerns became real. But in the end, the Superdome proved to be a true and steady shelter from the storm.

In the days following the National Weather Service warnings, reporters from around the world convened in Louisiana to cover the devastation. The media room in Baton Rouge at times resembled a United Nations meeting, with journalists from Tokyo, France, Switzerland and other foreign locales. Everyone ranging from the Thibodaux Daily Comet and USA Today to the Dallas Morning News and Boston Globe were picking up daily coverage. "It has been completely overwhelming, the number of media calls we've received since it was clear the hurricane was heading our way," Hawkins says.

Jennifer Donelan, a Chicago-based correspondent for CBS, has covered the death of a pope and a slew of other natural disasters. But she sought refuge from Katrina with her old employer, WAFB-TV in Baton Rouge, fearful of putting her crew in harm's way. For the dozens of reporters that were unable to hunker down in the city before landfall, it meant operating from Baton Rouge until they could make their way to the epicenter. But getting into New Orleans was easier said than done during the first week. Many teams had to beg for rides with the National Guard, Red Cross, FEMA or other officials. [See related story, P. 20.]

Once in New Orleans, however, a larger challenge loomed: How to communicate your story. Cell phones, e-mail and fax machines were unreliable due to downed towers. The New York Times provided satellite phones for many of its reporters, and editors at the Houma Daily Courier found text messaging to be successful during the early days of the storm. CNN used some of its own technology, new digital newsgathering equipment designed by its own people. It combines cameras, editing tools and advanced satellite and Internet communications equipment into a laptop-based system. Reporters say the setup allows them to edit packages and file reports on the scene without carrying bulky edit equipment or traveling to satellite feed points.

Print publications in New Orleans likewise found themselves facing challenges. The Times-Picayune evacuated and took refuge at the Houma Daily Courier and in rented offices in Baton Rouge. The Picayune and a few other papers went without print editions for several days, compiling as much as they could on the Web site and dedicating all resources to storm coverage. WGNO in New Orleans also moved in with its Baton Rouge sister affiliate WBRZ, with reporters and anchors sharing airtime. City Business established a temporary office inside the Baton Rouge Business Report. Gambit Weekly shuttered operations. (See related story, P. 31.)

Every reporter in the field, no matter where they were stationed during the first week, had obstacles to face and overcome. Information from government officials was obviously being filtered and needed deciphering. Inclement weather knocked out communications and innovative approaches were in high demand. But even in Lafayette, the mission remained clear. In a time of despair like this, the public needs to be in touch ' even if it means exposing them to graphic images from the storm and danger around every corner. Hoyt, the KLFY news director, says he has been concerned about his reporters on the scene – they were amongst the first to hunker down in New Orleans – but he realizes their duties have been of great importance and their work will not be sugarcoated. "We just report the information that comes in," he says. "We're going to put all these things on the air. We're not going to act like there's nothing wrong in New Orleans."