A Taxing Debate
Is it time lawmakers address Louisiana's century-old taxing model for the oil and gas industry? By Jeremy Alford

Although the oil and gas industry's impact on Louisiana's economy fluctuates with each given year, critics wonder why it's still governed largely by a taxing method that was developed in 1910.
The very first tax on the industry was based on the severance of oil, and it was levied as an occupational license tax. The severance tax followed in 1921. 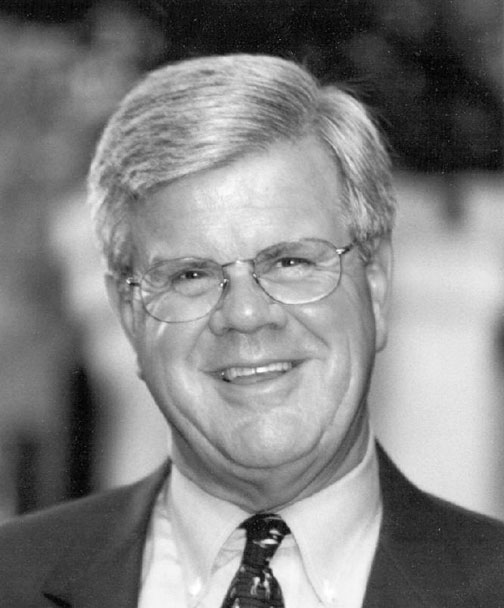 A Taxing Debate
Is it time lawmakers address Louisiana's century-old taxing model for the oil and gas industry? By Jeremy Alford

Although the oil and gas industry's impact on Louisiana's economy fluctuates with each given year, critics wonder why it's still governed largely by a taxing method that was developed in 1910.
The very first tax on the industry was based on the severance of oil, and it was levied as an occupational license tax. The severance tax followed in 1921.

There have been a handful of changes to the rates since 1910, including fluctuations from a volumetric to a percentage-of-value based tax, but the oil and gas industry has remained largely untouched by lawmakers over the decades.

It's an interesting dichotomy, considering the industry's value.

Oil and gas infrastructure accounts for a large share of Louisiana's gross domestic product - in some Gulf Coast communities like Houma and Lafayette, it can account for as much as 20 percent, according to Moody's Analytics.
But is it enough? Could Louisiana benefit from implementing new taxes on the oil and gas industry?

These policy questions seem to come up on a regular basis, whether as campaign issues or as proposals before the state Legislature.

The outcomes, however, are usually the same: new taxes always fail to gain momentum.

The latest example came in March when two legislative oversight committees rejected a proposed set of rules adopted by the Tax Commission that would have increased the state taxes paid by owners of certain drilling rigs. Gov. Bobby Jindal concurred with the decision.

The failed rule stipulated that lateral sections of drilling rigs should be assigned a value and taxed. As a result, the commission currently only taxes the vertical portion of wells and rigs.

"The overwhelming advantage goes to the side of industry," Gravolet says.

Don Briggs, president of the Louisiana Oil and Gas Association, says the industry has always been successful in these political debates because its argument remains a strong one.

"We would lose the economic impact of hundreds of millions of dollars being spent in the state," he maintains. "Exploration companies would invest their drilling dollars in other regions, because the return on investment is greater with higher spot oil prices. Again, Louisiana would lose the economic impact of drilling dollars being spent in Louisiana."

Based on a study of the nation's top 10 oil-producing states conducted by LECG, an international expert services firm based in California, oil companies pay four major types of taxes:

Production taxes levied on the value of the oil extracted from the ground
Corporate income taxes levied on the net income of corporations
Property taxes applicable to oil properties, which may be based on the assessed value of future expected production from oil reserves in the ground
Sales Taxes on purchases of both inputs and equipment needed for capital improvements

And among the 10 states surveyed, Louisiana ranks third in terms of the tax burden placed on the industry, falling behind Wyoming and New Mexico.
Still, the debate doesn't seem to be dying, even if it is being shouldered by a select few.

In late October, Public Service Commissioner Foster Campbell, a Democrat from Elm Grove, starting beating his old policy drum again for a tax on the industry, a war cry he has chanted for years dating back to his time in the Louisiana Senate.

The conversation comes at an opportune time, just as the Legislature is dealing with the aftermath of record-setting budget shortfalls.

Today, more than 90 percent of the oil and gas processed in Louisiana comes from other states and foreign countries.

That Louisiana doesn't actually have a processing tax disturbs Campbell.

While the argument that the industry would flee remains, Campbell says he doesn't buy it.

"Can the oil companies move the Mississippi River that carries the giant oil tankers to Baton Rouge?" he asks. "Can they relocate the huge refineries lining the river between Baton Rouge and New Orleans? Can they rip up 40,000 miles of pipeline? Will any state besides ours accept the pollution and coastal erosion that comes with oil and gas production and processing?"

"It would generate enough revenue to enable Louisiana to repeal its state income tax, putting us in line with prosperous states like Texas, Florida and Tennessee," Campbell says.

That debate, however, may have to sit on a shelf for a while. The sLegislature debated a proposed constitutional amendment to allow voters to enact the new tax in 2010 and the measure failed to gained momentum.

Another record October at Lafayette airport

"October was another great month for the airport, and we remain on a record pace for the best year ever. With the holiday season fast approaching, we hope people will continue to choose to fly Lafayette," Lafayette Airport Commission Chairman Paul A. Guilbeau said in announcing the record. "There are other reasons to be optimistic this will be a record-breaking year," he added. Guilbeau cited Allegiant Airlines' new service to Las Vegas, flights that have been mostly full. Also, he noted that in December United/Continental will be bringing in 70-seat planes to replace the smaller 50-seat regional jets that service the Lafayette to Houston route.

Load factors - the number of passengers flying on an airline versus the number of seats available - continued to be high in October for all carriers. All airlines reported at least 86 percent capacity on flights. Cargo numbers for October also remained high, the airport reported. Cargo boarded on planes here totaled 871,107 pounds, and cargo taken off of planes totaled 1,081,482 pounds. - Leslie Turk 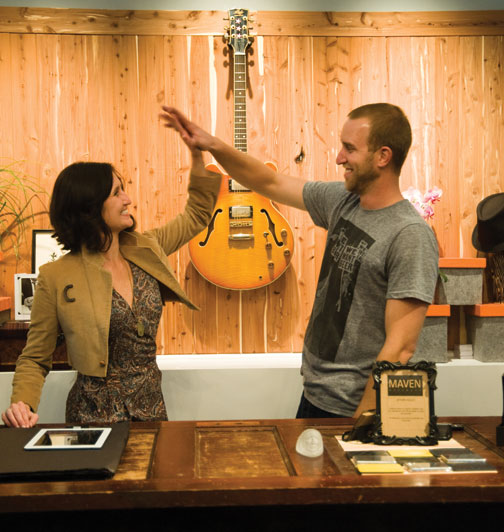 Christina and Daniel Barbier of Maven in River Ranch

The sprawling strip of boutiques at MainStreet in River Ranch has expanded with the addition of Maven, a men's clothing and accessories store.

Daniel and Christina Barbier, who recently celebrated their one-year wedding anniversary, decided to open the store to fill what they say is a gap in the Lafayette market, specifically in the River Ranch area, for less conservative menswear.

"In this area especially, there were not really any clothing stores catered toward men who wanted to dress like what they saw in the movies or in magazines," says Christina, who moved to Lafayette in 2009. "We just kind of wanted to bring this experience of a brotique' to men, because there are so many boutiques for women. We would drive through and we would see all these guys out in front of these women's stores just texting and looking bored. So, we wanted them to have that boutique experience but for guys."

From the wallets that house iPods while still maintaining a sophisticated, retro-inspired style to the effortlessly cool leather jackets that resemble something James Dean would don, Maven offers clothing and accessories for every man on any budget.

"Our goals are to really bring a big-city style with an accessible price point to Lafayette," says Christina, an export from Brooklyn, N.Y. "We are definitely price-point driven. Our goal is to make a more contemporary style available at any price point."

The couple draws inspiration from its customers, which is why every first Friday of every month, the Barbiers show their appreciation by holding a soiree at the store, located in the former Lamp Designs spot at 100 Rue Promenade, to kick off the weekend. The event runs from 5:30 p.m. to 9 p.m. DJ Andino spins records, and cocktails are served.

"I guess one thing the store has made us realize is what a hole there is in the marketplace for men who want a specific style that they can't necessarily find," says Christina, whose retail experience includes working for fashion powerhouses like Yves Saint Laurent and Hugo Boss.

Christina has been surprised by the number of visitors to Lafayette who come through her doors. "We have customers who come in from New Orleans and Baton Rouge who love the store," she says.

The couple works hard on the product mix and proudly points out that no item costs more than $300. "I would say it's pretty unique, and that was one of our focuses," Christina says. "We wanted to make sure that whatever we bought wasn't a basic that somebody had but was a new take on a basic or something that was just completely unique."

LOUIS SIMON II, former administrator and general counsel for the Louisiana Board of Ethics, has joined the Lafayette office of JONES WALKER as special counsel in its litigation practice. Simon has more than 30 years of experience in maritime, personal injury and commercial litigation. "Simon is a seasoned and respected defense attorney, and he brings to our firm a wealth of knowledge on the intricacies of the state ethics laws," says William H. Hines, managing partner of Jones Walker. "We are pleased Louis has decided to return to private practice adding his skills in the area of commercial litigation to our practice, as well as advising clients on corporate and business legal affairs." Simon obtained his bachelor or arts in political science from LSU and his juris doctor degree from the university's Paul M. Hebert Law Center. A Rayne native, he has lived in Lafayette for the past 25 years.

Health care development executive DON ADAM has joined LHC GROUP as senior vice president and chief development officer for home health and hospice services. Adam's credentials include more than a decade of post-acute health care experience at St. Louis-based RehabCare Group Inc., where he served as chief development officer and senior vice president of mergers and acquisitions. Before joining RehabCare, he spent 10 years in the banking industry. Adam is a graduate of Pennsylvania State University, where he earned a bachelor's degree in finance. He holds a master's degree in business administration from the University of Pittsburgh's acclaimed Joseph M. Katz Graduate School of Business.

In Case You Missed it

A company that manufactures proppants that are used in hydraulic fracking, Carbo is building a $17 million facility in New Iberia that will employ 40 people

Acadian Cos. is scheduled to add 50-75 employees in 2012 and will likely add more if activity if the Gulf rebounds strongly enough

Stuller Settings will spend about $5 million a year over the next two years on capital expansions and improvements and may add another 50 people to its payroll. The company will need a strong recovery in the national economy to truly spur its growth, he said.

Maritime International is moving its manufacturing operations from China to Lafayette. The firm will make an $8 million capital investment here and start with 30 jobs, increasing to 90 jobs over three years

A combination of FedEx, T. Baker Smith, International Trucks, and TriStar Graphics will add 44 jobs in the region

The Schumacher Group is spending $16.8 million to expand its headquarters in Lafayette. The firm will be adding 600 jobs with an average annual wage of $62,500 over the next five years

The Lafayette Airport is in the middle of a three-year, $28 million runway improvement project

Scott's annual forecast on the local economy is presented by ABiz and sponsored by MidSouth Bank and Dwight Andrus Insurance. For images from the event, see the BizScene section in this issue.

A split earlier this year with La Fonda founder Leebob Cox's children, Stephanie Cox Gagnard and Sherwood Cox, led longtime general manager and part-owner Gabe Bako to venture out on his own. His new concept, Bako's "Tex-Mex and Beyond," opened to curious diners Nov. 1, and business has been brisk.

"The bar has extended hours," Bako says. "It just depends on how busy the bar is."