America is invariably the only country where great restaurants can be found in strip malls. Strip malls, that uniquely American testament to streamlined consumerism, are ideal for more restaurants than just blasé chains or fast food franchises. Even now it's easy to forget that surprises can be found within them. Blue Agave is one. 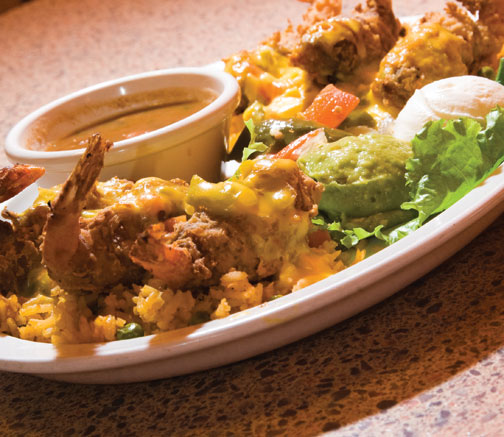 America is invariably the only country where great restaurants can be found in strip malls. Strip malls, that uniquely American testament to streamlined consumerism, are ideal for more restaurants than just blasé chains or fast food franchises. Even now it's easy to forget that surprises can be found within them. Blue Agave is one.

"The best tequila in Mexico is made from the agave azul, so we called it Blue Agave," says owner Roberto Cervantes, who opened his restaurant four years ago this March. Before owning his own place he worked at Tampico and Picante. It was at these places that Cervantes acquired the knowledge and skills to be a restaurateur. Additionally, some of his current employees, including Dickie Hollier, Blue Agave's general manager, and Jose Perec, who runs the kitchen, worked with him while he was honing those skills. This lends a certain reliable fluidity to the place.

Blue Agave was many years in the making, always in the back of Cervantes' mind. "After all those years it was time, it was just time to open my own place," he says. One of the touches he wanted was to feature lots of fresh, seasonal seafood. "We offer a lot of seafood items since many Mexican restaurants don't have a lot of seafood," he says. As we found out, the seafood offered is exemplary.

The menu is incredibly varied and extensive. Aside from the typical and the unusual twists, Blue Agave knows how to cater to all of its clientele. You have to respect any Mexican restaurant that has a menu subheader titled Para Gringo. They know when someone walks in with taste buds more shy in nature, who automatically scans the menu for what is familiar and close, it's almost immediately discovered. This is for the person that goes to Italy and only orders pizza.

Turning toward what locals call the Youngsville Highway off Pinhook is where you will find Blue Agave. With an outside glance you would think the place would be no bigger than a matchbox, but it has a deceptively New Orleanian shotgun design that just keeps going and pressing on to the back. The walls are the sort of bright orange-yellow of an egg raised in your backyard and the décor is sparse, just a few hints of Central Mexico in the faux Aztec and Mayan touches.

It might say something that it's tough to write about any Latin restaurant without trying the margaritas, but when the going gets tough the tough order the house margarita, on the rocks, with no salt on the rim and aren't a bit sorry for it. The difference between the top shelf margarita and the house is a few dollars that reflect the lack of premium liquors but honestly, you won't miss it. The house margarita has a perfect balance of citrus and booze and doesn't taste like they douse it in simple syrup to mask cheap tequila like a lot of places do. Blue Agave's happy hour is from 4 p.m. to 7 p.m. and has $3.50 house margaritas, $1.95 domestic beer and $2.95 well brand drinks. But as for the nutrition, that doesn't come in a glass.

Guacamole
Fresh and chunky ripe California avocados made at your table. $7.99
File guacamole under that "love it/hate it" category. We who love it have a sort of primal craving to throttle its skin until the meat pops out. From here, the ingredients vary. Some add fruit, some add salsa, some just add red onions. Blue Agave has its server come right to your table and, on a huge tray, scare several fruits of their skins by way of a large spoon and a firm hand. From here it is mashed to perfection and several ingredients, all until now finding a home in tiny bowls circling the tray, are added. A little salt, a little onion, a little spice and pretty soon you are licking the bowl clean. Both corn and flour tortillas are offered for a nice variety of texture and flavor.

Stuffed Shrimp
Six jumbo shrimp stuffed with cheese and chiles, wrapped in bacon and coated with a spicy batter. Fried till crispy and served on a bed of Mexican rice, smothered with queso sauce served with charro beans, guacamole, sour cream and jalapeno relish. $16.99
This was my table's unanimous favorite. It's a Louisiana specialty to take something as naturally healthful as shrimp and make it naughty. This is no exception. The spicy batter is incredible and the bacon is thick and crisp with the large, soft shrimp in the middle. The plate comes with six shrimp, Mexican rice with queso sauce and charro beans, along with jalapeno relish, sour cream and guacamole. This a dish you can walk away from and feel done.

Chipotle Chops
Grilled pork chops, brushed with raspberry chipotle sauce, a perfect blend of sweet and spicy. Served with agave rice and potato hash. $11.99
Two thin pork chops come with this dish. The raspberry tinged chipotle sauce makes a beautiful glaze, and I wish there could have been more. The grill creates a great charring but the spicy rub was a bit heavy on salt.

Enchiladas Enmoladas
Two corn tortillas stuffed with chicken and topped with mole poblano sauce and cotija cheese. Served with Mexican rice, refried beans, avocado slices and onion rings. $10.99
Let's talk mole. Mole is made by roasting one or more varieties of chili peppers and usually adding a few more spices or ingredients, even nuts. It's then ground down. After this step it is mixed in a heavy pot with broth or water and creates a very thick, dense sauce with a very smoky flavor. There are as many different mole recipes as there are families who make it, and Blue Agave's has one of the deepest flavors. It is a strong taste that permeates a dish and acts as a nice buffer for enchiladas where the main flavors are usually mostly meat and cheese.

Sopapillas are triangular beignets coated with cinnamon sugar, rather than powdered, and dipped in honey. These were meltingly marvelous (but I do suggest the restaurant stop using the Kraft honey packets).