Chef Brian Blanchard takes over a la carte, freeing up former owner Michael Doumit to devote his time to sales. 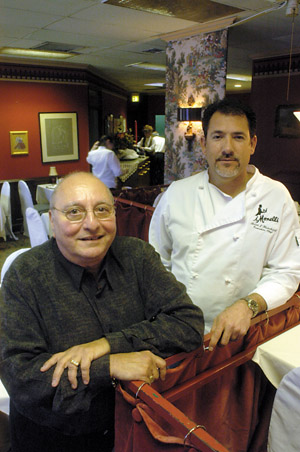 Michael Doumit of a la carte enjoyed a recent dinner at Chef Brian Blanchard's iMonelli so much that by the next day, when one of Doumit's clients asked him to cater a dinner party at her house, he served up the most tantalizing menu he could think of: the same soup, salad, entrée and dessert he'd had the night before at the Italian restaurant.

"He sold her the menu top to bottom," Blanchard says. "I said, 'Michael, you've got to slow down,'" the chef recalls. "I'm telling you, he can sell."

It's the crux of a business relationship that has since blossomed between iMonelli's Blanchard and a la carte's Doumit. But there's much more than a shared passion for food and catering that brought these two together. For some time, Doumit had been struggling to get a handle on a la carte's escalating debt, and last fall he turned to Blanchard to bail him out.

For the past few months, Blanchard's been hanging out at the Oil Center eatery, slowly making the kind of changes that have returned the popular restaurant and catering business to profitability. He's retained only about 20 percent of the staff, and a few weeks ago paid the Internal Revenue Service to relieve a tax lien on the operation's equipment, the final step in his takeover. "You could say I cleaned up the place a lot," Blanchard says. "Michael knew what needed to be done, but he was battle weary, and when he quit fighting, things just got worse."

Blanchard formed a new corporation that purchased the a la carte name and assets ' and he's been helping Doumit pay off the enormous debt. "Michael is responsible for all the debt a la carte Inc. had, but the two of us are making great strides in making good on all that," Blanchard says ' with the exception of back taxes that Doumit must pay personally. "[The debt] was at least six figures. It changes all the time. To say exactly how much, I don't know," Blanchard adds. "Basically, what I'm doing is what you hire a manager to do, but I own the business."

In the meantime, Blanchard, 41, says he's been the student learning from the 67-year-old's decades of catering experience. The chef, who also owns a scaled down version of iMonelli in Morgan City called Café JoJo's, expanded his off-site catering operation out of iMonelli a couple of years ago. The successful venture caught the attention of Doumit, who viewed his new competitor as a good fit for a la carte because of similarities in the way the two run their catering operations. Says Doumit, who began his catering career in New Iberia in 1963, "His concept was the same as mine: one staffer for every 20 guests, good food, the best ingredients, no substitutions. If we say lump crabmeat, it is. If we say Louisiana crawfish, it is. Absolutely no fooling the customer."

Blanchard isn't quite sure what would have become of the 20-year-old Oil Center business if Doumit had not come calling. "They were on a slippery slope," he says, "so I don't know what the future would have held for a la carte." Doumit, however, insists he would never have shut the business down. "I had a mess, but I would have continued."

Blanchard believes Doumit got in financial trouble in part because he was unable to refuse people or stand up to employees. "I think Michael's biggest flaw is he's just too nice, and he makes really poor decisions when it comes to personnel because he doesn't realize you're not going to be the most popular fellow all the time." Blanchard also says any time a nonprofit or civic organization came calling, Doumit felt obligated to make a donation ' pressure Blanchard himself understands all too well. "It's hard sometimes," the chef says, "but you have got to say, 'no.' If you give a $100 donation, you have to do $1,000 in sales to recoup it."

Blanchard believes there's a big misconception about the success of local restaurants, which he insists average only a 10 percent profit margin. He says new competition and finding good, honest help are two critical issues facing independent restaurant owners in Lafayette. "People think they're going to make a ton of money in the restaurant business, and it just doesn't happen," the restaurateur asserts. "Every couple of weeks you've got a new restaurant opening. Most people only see when you're busy because that's when they're [at the restaurant]. They see you walking around the restaurant and think, 'Wow, this is one big party.' But I work a minimum of 70 hours a week. They just don't understand the cost of doing business.

"What Michael wanted was not having to worry about the staff, people stealing, and food costs. The fight was daunting, non-stop. That's all the things I'm good at," Blanchard says, "so it was a perfect fit."

"I think Michael's doing as good a job as he's ever done," Blanchard continues. "Now it's like he can see the light at the end of the tunnel. He's revived and he's happier. And let me tell you, it's infectious. He's very good at selling a la carte and taking care of customers; he's there all day, and he's booking his functions, but now he has a stronger staff behind him."

One big change at a la carte was the return of "Lebanese Wednesdays" to the lunch buffet line. Blanchard quickly realized the talents of Joseph Johnson, a cook who worked for the former Oil Center Lebanese eatery Essie's for 12 years and has all of the recipes, including the secret ingredients for Essie's popular lemon chicken. Blanchard put Johnson in charge of the Wednesday menu. Johnson is also cooking cabbage rolls, grape leaves, tabouli, hummus and moussaka. As part of the restructuring of a la carte, the new owner promoted Larry Valentino, a New Orleans caterer displaced by Hurricane Katrina, to catering manager, and brought a former iMonelli employee, Lucy Cook, to manage the front of the restaurant.

For his part, Doumit is quick to point out his own shortcomings, acknowledging he's not as versatile a businessman as his new boss ' nor does he want to be. "I don't cook, and I don't know how to cook," Doumit declares. "I sell it, and now they have to make it happen, and it's wonderful," he adds. "I'm scared I'm going to wake up, and it's a dream."