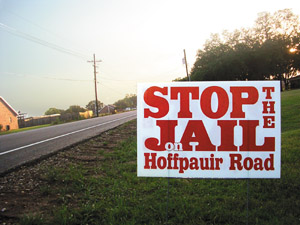 Associated Marine Institutes got off on the wrong foot with its soon-to-be neighbors along Hoffpauir Road in Judice.

"Hindsight's 20-20," says AMI spokeswoman Michele Money. "Do we wish we would have done it a little bit different? Probably, but in our eyes we weren't doing anything hush-hush, under the radar. We don't have anything to hide. As a matter of fact, we're extremely proud of our record."

AMI, which is planning to construct a 10,000-square-foot residential school for juvenile offenders along Hoffpauir Road, maintains that its facility is safe and provides a needed service to the community. The campus is for nonviolent youth offenders and will resemble a nursing home, without the fencing and razor wire associated with lockdown facilities for hardened criminals. Inside the doors of what it will call Acadiana Marine Institute, the nonprofit organization promises to deliver one-on-one counseling and schooling to help put at-risk kids on the right track.

But area residents can't shake the fact that a few dozen convicted criminals will be moving into their quaint, rural neighborhood. Jennifer Horton, a local doctor who lives in the area, wrote the Independent Weekly: "Whether you call it a 'jail' or 'residential facility' is not really the point. AMI wants to move kids into our neighborhood who have been convicted of a crime. AMI does not plan to put a fence around their compound because it would be 'offensive to the kids.' That is not going to make me feel safe at night."

Along Golden Grain and Hoffpauir Roads, more than a dozen signs that read "Stop the jail on Hoffpauir Road" have cropped up in front of homes. Jerry Meaux, president of the board for SLEMCO, is organizing opposition to the facility. Meaux and other residents have hired public relations consultant Sandy Kaplan and attorney Jimmy Davidson (who is also the attorney for SLEMCO) to assist in their fight.

Meaux referred The Independent Weekly to Kaplan, who says he has been directed not to comment until a public hearing scheduled for Tuesday, May 29, at the Lafayette City-Parish Council meeting.

Lenwood Broussard, councilman for the west Lafayette district, isn't aware of any legal actions residents could take that would derail the project. The facility's site falls outside of the city's zoning jurisdiction and has already received plat approval.

"As an elected official, I've got to represent that district," Broussard says. "And I'm not happy that we've got this turmoil going on and there's not much I can do about it. The only avenue I have is to get people to the meeting and let them express themselves and what their concerns are."

Many of the residents were particularly disturbed after learning of the facility through word of mouth, without any type of official notification from the company or local government.

"Why haven't we been told about this?" Broussard asks. "When were they going to tell us that this so-called safe place that they're going to put out there was going to be built? If it's not bad, why didn't y'all let us know about it? Because it's controversial."

Since the opposition arose, AMI has faced an uphill public relations battle. Concerned residents in Judice have already discovered a couple of troubling incidents that occurred at other AMI-owned facilities across the country. In the early '90s, two juveniles housed with an AMI subsidiary were convicted on murder charges for bludgeoning their work supervisor to death. News of the incident has quickly spread down the sparsely populated area of Hoffpauir and Golden Grain roads.

Some residents are also panic-stricken by the fact that the facility will be housing juveniles from across the state. "When you say New Orleans," Broussard says, "with the crime that's happening out there, it really concerns them."

Neustrom believes people have developed false impressions about AMI's juvenile group home. "I wish we could somehow fast forward a year or two," he says, "have the facility up and running and then measure the public response to it. Because I think it's going to be positive. It all boils down to how it's managed, and I think it will be managed properly and it'll be an asset to the community."

One thing's clear: Acadiana needs this type of program. According to the state Office of Youth Development, the Acadiana region has the highest number of juveniles currently court-ordered to out-of-home facilities, including both secure and nonsecure sites, in the state. The area also includes the two zip codes with the highest number of adjudicated youth ' North Lafayette's 70501 zip code and the 70560 area of New Iberia. Adjudicated youths are those deemed by a court to be delinquent, unruly, dependent, neglected or abused.

Many at-risk youths from Acadiana are shuffled off to group homes and secured facilities in other parts of the state because of a lack of local options. OYD says it currently has only 31 group home beds for adjudicated youths in the region. The AMI facility would house another 36.

Neustrom points to studies showing that kids kept closer to their families have a better chance at rehabilitation than those that are sent off to other area centers. "It's a better chance of success if it's closer to home and the family can be incorporated into the treatment," he says. "It helps."

AMI officials are counting on the support of the surrounding community. Sirrnest Webster, executive director of a 31-bed AMI facility in Wimauma, Fla., just outside of Tampa Bay, says community acceptance is a critical component of his group home's mission.

"We're not using hardware to keep our kids there," he says. "We're using our relationships to keep them there. We have kids that want to be in the program."

When the Wimauma facility was built, residents in the area were initially apprehensive. Now, Webster says many are involved as volunteers. "It takes a village to raise kids," he says. "There are so many different dynamics that went on to get these kids where they're at, but despite that, they can still make it."

Webster says the community has remained safe, and they have only had a few escape attempts with students, which never resulted in any crimes. AMI's Money says that despite isolated problems at other schools, including the one in South Carolina, the company's overall track record is good.

"AMI is not unlike any other school," she says. "There are going to be incidents. What we try to focus on is we have a stellar safety record if you look over the past 40 years. We go to great lengths to keep our students and the community safe."

AMI also touts an overall success rate of 70 percent for more than 75,000 students served ' meaning none of these kids have had further contact with the juvenile justice system.

"If not for programs like AMI," Webster says, "troubled kids would have no other choice. There's some risk. We feel it is well worth the risk, and we are taking these kids and giving them a second chance."