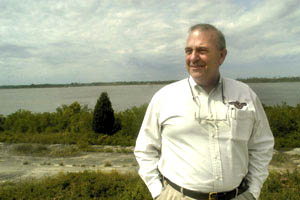 In his corner office at Live Oak nursery, Michael Richard keeps records of more than just his plant inventory. His desk is piled high with copies of letters, lawsuit filings, water quality records, and other documents related to the complex geological makeup and legal history of Jefferson Island, where he has made his home for the past 36 years.

In addition to serving as manager of the storied tourist destination, Richard also is the de facto resident historian. When he makes a point, he likes to have documentation to back up what he's saying ' lately it's just a matter of finding it.

"I've accumulated a lot of stuff," he says as he sifts through a filing cabinet drawer filled with old maps. Looking over a Jefferson Island Salt Mining Co. map from the 1940s, Richard points out the spot where a drilling rig punctured the wall of a salt mine on Lake Peigneur in 1980, a catastrophic event that put Jefferson Island on the national news.

The shocking drilling accident turned the lake into a giant whirlpool and swallowed about 65 acres of land, including some homes and historic oak trees and pecan groves. To this day, a brick chimney from the home of the late Jack Bayless Jr. ' Richard's former boss ' ominously rises out of the lake near the Rip Van Winkle Gardens. "We saw what one little miscalculation did," says Richard. "It put all these people out of work. It ruined an industry that we had here that employed people since 1920."

That's just one of the reasons Richard and other area residents are so opposed to the creation of two natural gas reservoirs in the salt dome underneath Lake Peigneur. Jefferson Island Storage and Hub, a natural gas storage company, already owns and operates two natural gas storage caverns in the Jefferson Island salt dome. The company is now seeking state and federal permits to drill two new salt caverns ' a $100 million expansion that would double its current storage capacity. These oval-shaped storage caverns are approximately 1,200 feet tall and 300 feet in diameter.

Richard and other Jefferson Island residents have multiple concerns. "Each of these caverns contains 6 billion cubic feet of natural gas under 2,000 pounds of pressure," says Richard, "And there's only one valve between the gas and the pipeline."

"That's a lot of gas," he adds, raising his eyebrows. "To put it in terms of dollars, that's $60 million worth of gas in each cavern."

Richard has formed a coalition of concerned residents and succeeded in getting the Iberia Parish Council to pass a resolution opposing the salt caverns. St. Martin Parish state Rep. Sydnie Mae Durand has also introduced a resolution in the state Legislature requesting that the state Department of Natural Resources deny mining permits for the project. The only government agencies with any regulatory authority over the project are the U.S. Army Corps of Engineers and DNR. Jefferson Island Storage and Hub needs permits from the Corps for the dredging it will need to do at the bottom of Lake Peigneur and for a new pipeline. DNR will need to approve permits for the salt cavern and for three salt-water disposal wells.

Jim Pitts, general manager of Jefferson Island Storage and Hub, says his company is working with regulators to address all concerns and that they hope to have their permits in hand to begin work this summer.

"These regulations are designed to protect the public as well as the employees of our facility," he says. "We follow all those regulations, and we believe our facility is safe and shouldn't cause any concern for the residents."

Mining salt caverns is no simple endeavor. After drilling into the salt dome to a depth of 3,800 feet, Jefferson Island Storage then plans to pump in fresh water from a nearby well at a rate of 3,000 gallons per minute to dissolve the salt. Brine will simultaneously be pumped out of the cavern at a rate of 1,000 gallons per minute into a disposal well 6,500 feet below the surface. This water cycle will go on for four to five years to create the two caverns. The proposed Jefferson Island project will use approximately 7.8 billion gallons of fresh water from the Chicot Aquifer.

In addition to the inherent safety issue involved with storing such large quantities of natural gas beneath the shallow lake, Richard is raising concerns about the area's fresh water supply. "The geology of the area is very faulty," says Richard. "We're worried about all these potential places for [salt] leakage to occur and get commingled with the ground water."

Don Broussard, water operations manager with Lafayette Utilities System, says it's highly unlikely that salt water from 4,000 feet underground will reach the fresh water in the Chicot Aquifier. However, Broussard shares concerns that residential water wells could experience reduced pumping capability due to the 7.8 billion gallons that will be used for the caverns.

Richard is also wary that Atlanta-based Jefferson Island Storage and Hub's proposed expansion is purely profit-driven and isn't based on energy needs. He says natural gas storage provides a means for speculators to "play the market": buy gas when price and demand is low in the summer, and then resell it when prices go up during cold winter months when demand peaks. "They call it parking the gas," Richard says. "While you and I are hoping for a mild winter so our utility bills won't go through the roof, these guys are hoping for colder weather."

Pitts contends that his business simply involves selling a storage service, "similar to a bank."

"We don't actually own gas that resides in our caverns," he says. Rather, Jefferson Island Storage stores gas for an array of natural gas industry clients, ranging from producers to brokers to distributors, who need a secure facility to store their gas.

"They deliver their gas to our facility, and we inject it into the caverns for storage until the customer wishes to withdraw it."

As a major purchaser of natural gas, LUS Director Terry Huval says natural gas storage can help stabilize a sometimes-volatile market and can be critical in emergency situations, such as when a hurricane cuts off production in the Gulf.

"As there is more stored natural gas the prices for natural gas tend to drop," he says. "The more storage there is that means that there's not as great a demand for the supply that's available so it actually tends to mitigate the price of natural gas."

Natural gas storage is on the rise statewide. Joe Ball, director of injection and mining at the Department of Natural Resources, says his department has received applications for 10 new salt caverns to store natural gas over the past year. "Which is significant because we can go years without getting any [applications]," he says. Louisiana has 13 gas-storage salt caverns at seven different locations; DNR recently granted permits to Bobcat Gas Storage for two gas-storage salt caverns in St. Landry Parish, near Port Barre.

Richard just doesn't want it at Jefferson Island. This isn't the first time he's tried to prevent the storage of natural gas in the Jefferson Island salt dome. In 1994, he was involved with a citizens group that sued to prevent two gas reservoirs under Lake Peigneur. The effort failed, but Richard feels the group has much better odds of success this time around.

"I think the sentiment of the public and the level of concern of the importance of some of these environmental issues has come a long way. Just because it's been done somewhere and it's worked doesn't mean it's safe, and we want to show that. It's not safe, and until it is, we're dead set against it."