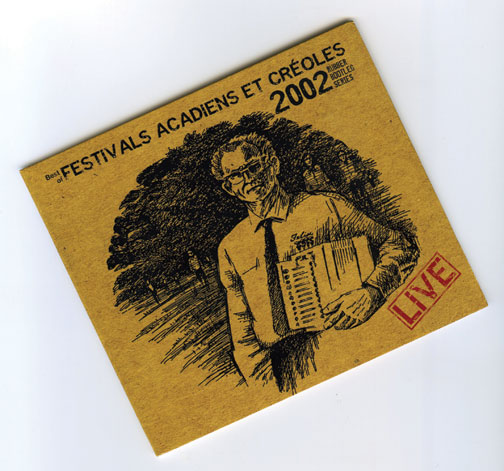 AIYEEE!
Another great record has come down the pike from upstart Valcour Records, South Louisiana's "boutique" Cajun-roots label. This time it dug into the Archives of Cajun and Creole Folklore at UL's Center for Louisiana Studies to pull together 14 live performances from the stage at the 2002 Festivals Acadiens. (The festival broadened its scope a few years ago and added "et Creoles" to its name.) The disc includes performances from standard bearers Walter Mouton, Belton Richard, Steve Riley, Wayne Toups and Jo-el Sonnier, plus performances by then-new groups like Charivari, Balfa Toujours and Feufollet, including a guest appearance with Balfa Toujours by the late-great Bois Sec Ardoin. The record was edited and mastered by Chris Stafford, a member of Feufollet. The band would have been young teenagers or tweens in 2002, and it's worth noting in comparing their rendition of the traditional two-step "Chère Mom" from 2002 to the mature songwriting and musicianship on a recent record like En Couleurs how far they've come over the last decade. The kids were competent then; they're damn good now. Part of the "Rubber Bootleg Series," Valcour's Best of Festivals Acadiens et Creoles 2002 is available for $12 at ValcourRecords.com and just about anywhere local music is sold. An MP3 version of the record can be downloaded from Valcour's website for $8.99, and 10 additional songs from the 2002 festival are also available as downloads. Good stuff. - Walter Pierce