Owned by Troy and Melissa Bijeaux, who also own Lafayette's Flowers, Etc., Café Josephine was opened because of a dream.

Café Josephine's bisque and shrimp and grits are to die for. By Anna Purdy 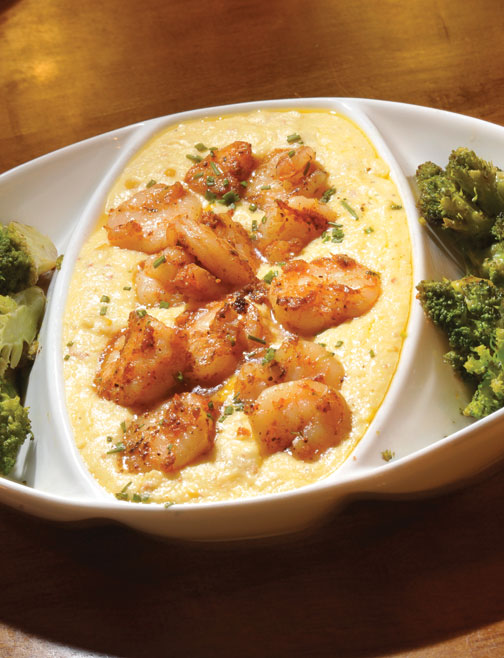 In Sunset, a horn sounds at 6 p.m. like a tornado warning; it is there to call workers in from the fields. There are a few banks and gas stations, a local grocery store and a fun flea market across the street from our destination, Café Josephine.

Owned by Troy and Melissa Bijeaux, who also own Lafayette's Flowers, Etc., Café Josephine was opened because of a dream. When they bought it three years ago, it was a meat market; after a few years and not much success, the couple decided to offer up food instead. Walking in feels more like a bistro than a café or diner, with bits of folk art above every booth and area rugs under most every table. Ever the family place, there is even a cherry wood changing table in the women's restroom. Troy and his son Colby, who is his father's right-hand man in the restaurant, did all the woodwork. Taking breaks from the kitchen when he is able, Troy comes out to greet every customer and say hello, both as an act of courtesy and to say hi to friends.

"It was a lifelong dream of owning a café," says Troy. "I just enjoy watching and having people eat great food. The food here in South Louisiana is about our world, our culture, who we are. Food here defines parties, funerals, weddings, you name it. Seeing people leave satisfied and full is the reward."

Being full is one thing. Being nearly unable to walk after eating everything offered at Café Josephine is another thing altogether. Of the dishes tried, three stand out: the biscuits, the corn and crab bisque and the shrimp and grits.

Once seated, you are brought a tiny imitation pirogue, made of wood and lined with waxed paper. Its passengers are a few biscuits the size of silver dollars. You can have as many as you please, but the danger is scarfing them down like a zombie at a brain buffet because these are the lightest, most buttery bits of dough with hints of cheese and onion and a lot of tasso. I may or may not have eaten six of them before remembering there were plenty of courses to go.

The corn and crab bisque is served in a petal bowl with shirred edging. The first thing I saw was huge, meaty chunks of crab bobbing on top. It isn't too spicy so you may have to add hot sauce, but who cares? Piping hot with the sweet corn marrying the taste of the sea is never a bad choice. My bowl was gone before photographer Robin May was done taking photos of her own. I may or may not have used biscuit No. 7 to scrape the rest of it up. No photos, no proof, folks.

Our last favorite dish of the night was shrimp and grits. Now, I don't know who first thought to combine those two, but they deserve some sort of Nobel Food Prize. Thick but not heavy, consistent without being boring and with bits of corn making cameos, these are some good grits. Grits are tough to mess up, yet it happens to some restaurants, but not to Café Josephine. Served with spiced, medium-sized shrimp on top, the plate is divided into thirds with broccoli flanking either side of the shrimp and grits. Much like the bisque, something about the texture of corn niblets, the smooth cheesy flavor of the grits and the tangy bite of shrimp just works.

Troy considers his dedication to detail, to food, and to his family and friends the backbone of Café Josephine's success in the eight months it's been open. "We didn't lease this building, we bought it, to show our commitment," he says. "We're in it for the long haul. Without my family and my employees I would be nothing. I want to be known as a good person who serves good food, consistently. That makes me happiest."