A father and son set out for New Orleans, along with hundreds of Acadiana residents, to assist in the search and rescue efforts in New Orleans. 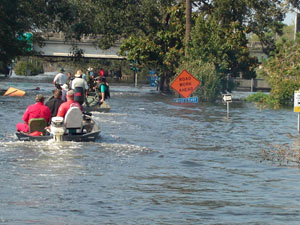 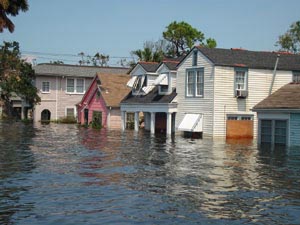 When the call went out for Louisiana residents with boats to assist with search and rescue efforts in New Orleans, Dave Spizale and his son, Matthew, heeded the call, along with hundreds of Acadiana residents. The elder Spizale is a New Orleans native and general manager of Lafayette's KRVS 88.7 FM; the younger is 23 years old and a second year law student at Loyola University who evacuated from New Orleans before Hurricane Katrina hit.

On Wednesday, Aug. 31, Dave Spizale says they left Lafayette with local residents who had some 300 boats in tow. They launched their boat at the I-610 and I-10 split. Spizale says, "There were three areas where the water was over the interstate, which functioned as a place to put the boat in, and you brought survivors to a different ramp." The two launched their boat at noon and managed to rescue 19 people before dusk. Nine of those they rescued had walked from Chalmette along the lakefront to West End Boulevard and Robert E. Lee. Many Acadiana boaters were turned away by local officals before they even reached the flooded region.

"Our experience there was chaotic," Spizale says, "as you might imagine in the midst of the greatest natural disaster in U.S. history. There were miscues coming from all levels of law enforcement. There was no coordination, in terms of if we could launch, when we could launch. We were told yes. We were told no. We were in the water, and we were told to get out of the water. Then we were told, 'Follow us. We're going to pick up some people.' But the impression though was that there were so many people that need to come out that it was just the tip of the iceberg."