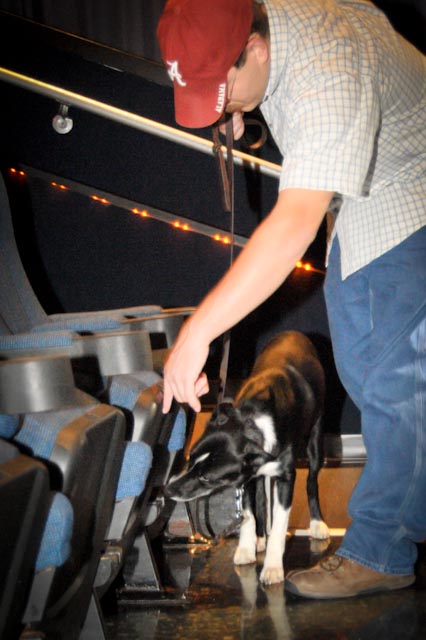 Jim Latimer and Deuce inspect for bed bugs at The Grand 16 on Johnston Street.

KATC reports that the press conference was held to refute "claims made by [T]he Independent that the theater has an ongoing bed bug problem."

According to the report, "Southern Theaters Regional Director Eric Kullander says in recent years, people have complained of bed bug bites at the Grand 16. The theatre investigated each claim and found nothing."

"The minute we have a complaint, we will not have one more person sit in that seat," Kullander tells KATC.

In its Nov. 10 daily INDsider blog, "Yikes! Bed Bugs at The Grand 16?," The Independent asks Southern Theatres LLC Chief Operating Officer Ron Krueger about a tip it received regarding possible bed bugs at the theater. The blog makes no independent "claims" of a bed bug problem, but does outline Krueger's initial response to the inquiry, during which he did not confirm nor deny the presence of bed bugs at the theater. Also included in the blog is pertinent information on bed bugs, how they spread and how other movie theaters have handled the same problem in recent years:

Movie theaters in Times Square made headlines in August 2010 when they, too, fell victim to the infiltration of bed bugs in New York City. According to a report from CBS News, an AMC Entertainment spokesman said one theater discovered the bed bugs due to a customer complaint, after which "we immediately closed [the theater]" until it was treated.

The theater in New York also removed the seats from the auditorium and replaced them with new ones, CBS reports.

Asked whether Southern Theatres would close The Grand 16 on Johnston if the problem persists, Krueger says "we haven't seen the need to do that."

In the Nov. 10 phone interview, Krueger told The Ind that "when there is an issue we do treat," also noting that "to characterize it as a consistent problem wouldn't be accurate."

Four days after the phone interview and blog publication, Krueger submitted a comment on The Ind's website pointing out that "based upon a thorough and certified inspection completed [the morning of Nov. 14], there are no bed bugs in the Grand Theatres in Lafayette."

"We also completed an inspection [four] weeks ago and did so six months prior as well," Krueger continues. "We currently conduct weekly inspections by management and now quarterly inspections by a certified bed bug sniffing dog. Again, that dog and his handler found no bed bugs in the [theater] today. As has been our practice, should we find a problematic seat, it is removed in addition to three seats in every direction from that seat. We then replace those seats with clean seats. The problem seats are then contained and heated to over 120 degrees.

The comment came a day after another commentator on the website questioned why no one from the theater had "refuted the accusations."

"We are way ahead of the curve in proactively treating all potential pests including bed bugs," Krueger continues in the comment. "We have worked with the Louisiana Department of Health on this issue and they too have indicated we are addressing this issue in a very proactive manner."