What we only alluded to, and what deserves a little more scrutiny, is the timing of Jindal's comments. 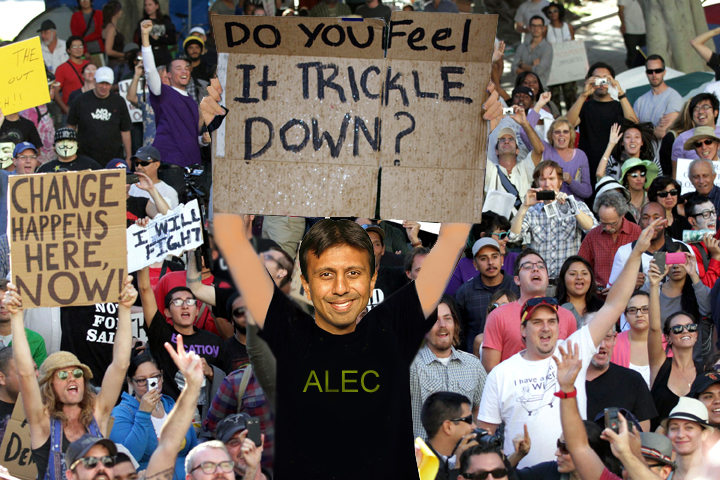 We reported Thursday on Louisiana Gov. Bobby Jindal's apparent anti-orthodoxy in expressing simpatico with the Occupy Wall Street movement when he told a reporter the OWS protesters are "articulating a genuine frustration from hardworking Americans." The quote was particularly jarring in light of Jindal's membership in the American Legislative Exchange Council, arguably the most pro-corporate political organization in America whose aim is to craft and pass corporate-friendly legislation at the state and national level.

What we only alluded to Wednesday, and what deserves a little more scrutiny, is the timing of Jindal's comments, which as The Hill points out came the morning after GOP pollster and message manager nonpareil Frank Lutz at the Republican Governors Association meeting in Florida schooled the governors on how to talk about OWS without isolating voters. Yahoo! political writer Chris Moody sat in on Lutz's session with the governors and breaks it down to 10 points of emphasis (Jindal appears to have taken point No. 7 to heart):

"I'm trying to get that word removed and we're replacing it with either economic freedom' or free market,' " Luntz said. "The public . . . still prefers capitalism to socialism, but they think capitalism is immoral. And if we're seen as defenders of quote, Wall Street, end quote, we've got a problem."

3. Republicans should forget about winning the battle over the middle class.' Call them hardworking taxpayers.'

"Everyone in this room talks about jobs,'" Luntz said. "Watch this."

He then asked everyone to raise their hand if they want a "job." Few hands went up. Then he asked who wants a "career." Almost every hand was raised.

"So why are we talking about jobs?"

"It's not about government spending.' It's about waste.' That's what makes people angry."

6. Don't ever say you're willing to compromise.'

7. The three most important words you can say to an Occupier: I get it.'

Then, he instructed, offer Republican solutions to the problem.

Use the phrases "small business owners" and "job creators" instead of "entrepreneurs" and "innovators."

9. Don't ever ask anyone to sacrifice.'

"There isn't an American today in November of 2011 who doesn't think they've already sacrificed. If you tell them you want them to sacrifice,' they're going to be be pretty angry at you. You talk about how we're all in this together.' We either succeed together or we fail together."

Tell them, "You shouldn't be occupying Wall Street, you should be occupying Washington. You should occupy the White House because it's the policies over the past few years that have created this problem."

Luntz advised that if they give their employees an income boost during the holiday season, they should never refer to it as a "bonus."

"If you give out a bonus at a time of financial hardship, you're going to make people angry. It's pay for performance.'"