Allegations are flying and mud's slinging in the race for the District 22 Senate seat. 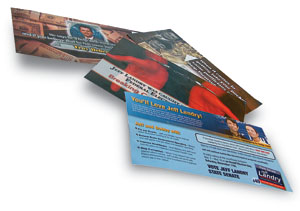 The runoff for Senate District 22 in Iberia and St. Martin parishes is shaping up to an old-fashioned brawl, with the two candidates accusing each other of a litany of activities that would not pass muster in any of Gov.-elect Bobby Jindal's proposed ethics legislation. Term-limited state Rep. Troy Hebert, a Democrat, faces Republican attorney Jeff Landry, former legislative aide and campaign treasurer to the current Senate seat holder, Craig Romero. The contest has generated a forest of flyers jamming mail boxes in the two parishes.

Landry's campaign has put out nearly 20 targeted fliers accusing Hebert of voting to give state legislators, including himself, heath care coverage for life; benefiting from hurricanes Katrina and Rita recovery contracts to the tune of $300,000; working as a "salaried consultant" for an insurance company while serving as chairman of the House Insurance Committee; raising taxes; and squandering his time in the Legislature rather than bringing much needed road improvements to the rural Cajun parishes.

"Troy is the model for why we need ethics reform," Landry says. "Our ethics laws don't require legislators to fully disclose where their income comes from. When it came time to vote to prohibit elected officials from doing hurricane-related contracts, guess what, he didn't even show up for the vote, three times. But yet he stands there, and he tells you he's for ethics."

Hebert claims Landry has taken his record and distorted it in every instance. The taxes he voted for are renewals, not new taxes, he says. He adds that the health care legislation didn't apply to himself. And Landry's characterization of him, Hebert says, as an old school, pocket-lining politician who wants to continue in government for his own personal gain, is downright disgusting.

After Katrina and Rita hit, FEMA and the Corps of Engineers were in charge of the state's cleanup contracts. As a small dirt hauler and builder, Hebert says he was a sub of a sub of a sub. He says, "I disclosed everything even before disclosure was required." He adds that he was advised by the House clerk to abstain from voting on a bill that did represent a conflict of interest for him. "I know the public perception is that something is wrong, and those things do get abused, but I'm comfortable where I've been," Hebert says. "But it is exactly why we need disclosure. How do you think [Landry] found out about what I do? He found it in my disclosure forms."

Hebert says that it's Landry who has failed to disclose his track record of working for state Sen. Romero. "All he's been is a right-hand man for Craig Romero who did whatever Craig's dirty work was. [Landry] certainly didn't have a problem with Craig Romeo working for 12 different oil companies while Craig was the chairman of the Natural Resources Committee. The same thing that he's faulting me for, his boss did it, and we never heard anything from him then."

State Senate records indicate that Landry was employed as an aide by Romero and paid by the state during the 2004 and 2005 sessions. Landry says he spent more time than that working pro bono, learning how the Legislature works. An audit investigating Romero's campaign contributions during his run for Congress in 2004 cites Landry as campaign treasurer during the 2006 race.

Landry says he's not running away from his former boss, although he does say Romero has not endorsed him, nor is the senator helping with the campaign. The candidate says he simply asks to be judged for himself and his actions, not his associations. "I'm not judging Troy Hebert for who he might have worked for. He dated Candy Edwards. Because he dated Candy Edwards, would you say he had a natural affinity to the same things that Edwin Edwards did?" Hebert says he's friends with Candy Edwards but neither confirms nor denies that he dated her.

Hebert says Landry should have quit working for Romero if he didn't agree with what Romero was doing. "Right now he shouldn't be saying any of this because it's hypocritical," Hebert maintains. "You can't be a treasurer for a term-limited politician who's seeking another office and then beat me over the head for seeking another office. He can't have it both ways."

Landry sees himself as part of the ethics movement he hopes will be swept into office on Bobby Jindal's coattails. One of his fliers states, "If you like Bobby Jindal, you'll love Jeff Landry." Jindal and Landry are the same age, and Landry says they share similar philosophies. There is a clear desire on Landry's part to present himself as a fresh face that will bring a new ethos to Baton Rouge. "We have a mutual understanding of the fundamental changes this election will bring to the state. I believe you're finally seeing a generation, regardless of our party affiliation, that is seeking a common goal."

At the same time, Landry says his years as an aide and law clerk have given him the kind of experience it takes to become a good senator. "Troy has 12 years in the House. In the Senate, I do have more experience."

Hebert derides that statement. "What has Jeff Landry done? He's never passed a bill." Hebert says that several freshman faces from the Iberia and St. Martin districts are headed to Baton Rouge, and there should be a member of the delegation with seniority. Even with term limits, over half the Legislature will be returning. "It's kind of like having a baseball team, the last thing you want to do is graduate all your seniors at one time. We need to have somebody over there with some seniority to keep the things going that are in the hopper." Hebert mentions I-49 and deepening the channel of the Port of Iberia as ongoing projects. Ethics is one of his platforms as well ' he says he voted for every ethics bill brought forward and wants to see bills that failed brought back for another try.

Ultimately both candidates come back to pounding on the issues that drive every election ' who can bring home the money and get things done. Hebert references one of Landry's TV spots. "Jeff says he's gonna fix our roads, fix health care, fix education and lower our taxes. How you gonna do all of those? The first three take money. The last one reduces the money you take in. Where's the math? Don't you think the rest of us would have done that a long time ago if we had the answer to that one?"