Fewer Americans are drinking the tea.

While more than half of those surveyed by the Pew Research Center Nov. 9-14 still won't say whether they support the Tea Party movement, more have a negative opinion of it today than a year ago. In fact, the Pew study reveals that since its victories in the 2010 mid-term elections, the Tea Party has lost both national support and support in congressional districts represented by members of the House Tea Party Caucus.

The Pew also noted that the image of the Republican Party has declined "even more sharply in these GOP-controlled districts than across the country at large." 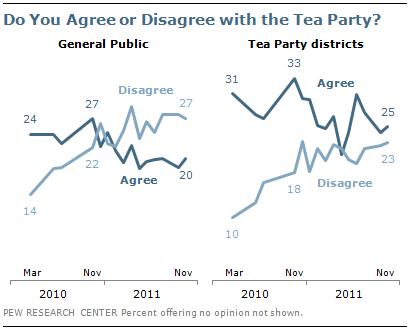 More Americans, 27 percent, now disagree than agree, 20 percent, with the Tea Party movement. Pew noted that year ago, in the wake of the sweeping GOP gains in the midterm elections, opinions were just the opposite on the party: 27 percent agreed and 22 percent disagreed.

Read the full results of the Pew survey here.