Pressured last month into keeping Director Greg Roberts on board for another six months, the Lafayette Airport Commission says his position will be advertised nationally before the end of the year. 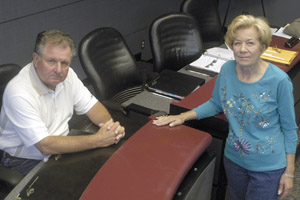 Although he's likely to keep his job for at least six more months, Lafayette Regional Airport Aviation Director Greg Roberts is still on thin ice with some airport commissioners. A couple of weeks before the heated June 7 meeting, Lafayette Airport Commission Chairman Carroll Robichaux and veteran Commissioner Brenda Burley were confident a majority of the commission wanted Roberts out ("Should He Stay or Should He Go?" May 30).

But that changed the afternoon of the June meeting, when much to their surprise, Commissioner Don Higginbotham ' who like Robichaux and Burley wanted the director to retire, resign or face termination ' instead motioned that a contract be drafted to keep him on for at least six months. Several weeks later, in a letter dated June 28, Higginbotham dumbfounded those commissioners again, resigning from the embattled board, citing the effect recent controversies have begun to have on his insurance business.

For the past year, the commission has been under fire for allegedly tainting a process to award a fixed base operator contract to an out-of-state company, questionable spending practices and violations of open meetings laws, and more recently Roberts' future at the airport after 14 years.

Shortly after throwing Roberts a lifeline, the State Farm insurance agent ' in his capacity as head of the commission's internal affairs committee ' began working on a draft of Roberts' employment contract along with Lafayette City-Parish Attorney Pat Ottinger (at this time Roberts is an at-will employee). The contract, which is not yet finalized, spells out Roberts' duties, responsibilities and compensation and provides a mechanism for addressing and evaluating his job performance.

Ottinger's been filling in as a result of the first casualty of the frazzled commission ' the May 30 resignation of longtime airport commission attorney Glenn Edwards, who bowed out amid allegations he gave bad advice about the legality of some commission expenditures. Last Friday, Ottinger said he had just presented the working employment contract to Roberts' lawyer, Joel Babineaux, but was not sure whether it would be ready for the Wednesday, July 11, meeting. (Ottinger has since appointed the Lafayette law firm of Simien & Miniex, headed by Clyde Simien and Rickey Miniex, to take over as the commission's legal adviser.)

Last week Chairman Robichaux asked that the issue of Roberts' contract be put on the agenda. "If the contract is ready, it'll probably be voted on," he says. Even if the commission approves the contract, Robichaux says the $92,000 position will be advertised this fall to ensure the airport has the best director in place. "[Roberts] can apply for the job," he says. At the June meeting, the commission supported another resolution by Higginbotham, voting to conduct a national search for a new director 90 days before Roberts' contract expires.

Burley was the only commissioner to vote against the six-month contract but supported Higginbotham's second resolution; as chairman, Robichaux votes only in the case of a tie. His tenure as chair ends in November, though his current commission appointment does not expire till October 2008.

Should Roberts apply, lining up the votes against him may be a challenge in light of the change of heart some commissioners experienced; in part, Roberts' future could be in the hands of his staunch supporter, City-Parish President Joey Durel.

"We are immediately searching for an individual that reflects Don's character and business acumen to serve the remainder of his term," Durel said last week in a tersely worded statement that commended Higginbotham for his service and expressed "much regret" over his departure. "There will be no further comment," he added.

Durel did not return a phone call seeking comment for this story.

Both Robichaux, a Lafayette City-Parish Council appointee who has served since 2004, and 11-year commission veteran Burley say they want Roberts replaced for a number of reasons, citing his abrasive personality and the way he treats individuals who do business with the airport as their primary motivation. "Years ago, I said, 'Greg, don't ignore our customers.' And when I say customers, I mean tenants," Burley says. "But he would do it anyway."

While it's unclear what factors caused Higginbotham's about-face (he's since been unavailable for comment) on Roberts' future, both Robichaux and Burley say they endured undue political pressure over their opposition to Roberts.

In one instance of particularly egregious behavior, such influence initially appeared to be coming from those with the power to control how funding is funneled to the airport. A June 11 letter penned by Louisiana DOTD Secretary Johnny Bradberry to Durel explained just how out-of-line that kind of pressure was. Bradberry's subordinate, State Director of Aviation Phil Jones, wrote a May 23 letter on department letterhead to Durel and also appeared at the airport commission meeting June 7, in both instances pleading ' and using language some commissioners deemed threatening ' with local officials to retain Roberts. In his letter, Jones even asked Durel to "use your influence" to prevent Roberts' termination.

Though clearly perturbed by his employees' decision to create the appearance of departmental support for Roberts, Bradberry apparently learned about their inappropriate behavior too late to offset the impact of it. Pressure from Jones and other officials like Broussard Mayor Charles Langlinais, who placed phone calls to commissioners on Roberts' behalf and also spoke up at the June meeting, appears to have swayed commissioners.

The Independent Weekly obtained a copy of Bradberry's letter from Durel's office last week. "These actions, in my opinion, border on a violation of Civil Service rules and contradict the organizational culture being created in this department," he wrote. "Understanding the outcome as reported in the media, I sincerely hope your decision and the decision of the committee were not overly influenced. In addition, I would like to explain that in no way would federal funds be withheld from your airport by DOTD because of leadership changes that may or may not occur."

Burley says Jones, who oversees 70 public airports in the state, used language she and other commissioners considered threatening. Both in his letter and at the meeting, Jones implied that Roberts' termination could impede the progress of the airport, saying it would be difficult for the FAA to put money into an airport with such management problems. "It was like if we got rid of [Roberts] we weren't going to get any funding," Burley says. "I said, 'Now that was a threat.'"

In addition to Durel's backing, commissioners Allen Dugas and immediate past Chairman Jim Nunn, perhaps Roberts' most loyal advocate, have not wavered in their support of the director. Such proponents note that the airport is doing well under Roberts' leadership, citing increases in passenger and air freight business, airport rental income and its 2005 recognition as the FAA's Louisiana Airport of the Year.

"If anyone thinks the success of an airport is because of one person, that's an insult to our intelligence," Burley says. "They're forgetting our great economical boom, convenience of location and all the other people involved in the operations of our airport. It's everyone working together ' in spite of Greg."

Robichaux, however, says the recent uncertainty over Roberts' job security seems to be having a positive effect on the director. "His demeanor has changed a lot. He's not as boisterous," Robichaux says. "But I want to see how long it's going to last. I want to see how his actions and demeanor progress after the contract is signed, sealed and delivered."