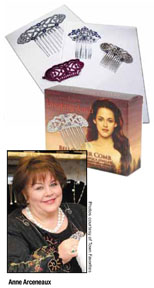 Arceneaux, who co-owns Baton Rouge design studio The Gilded Lily with Carmen Cantwell, says she and Cantwell wanted to design something that had an antique feel to it and resembled an heirloom piece. Although she has not read all of the Twilight books, Arceneaux says reading Breaking Dawn motivated her to co-create the now-coveted bridal hair comb.

"Reading her [Stephanie Meyer's] description made me design the piece differently," says Arceneaux, whose family owned the erstwhile Lafayette business Les Amis Florist and Gifts. "Stephanie Meyers had a unique vision for the comb, and she had the last say so in what comb Bella would wear in the movie."

Meyers, the series' author, explicitly mapped out her vision for Bella's hair comb in this Breaking Dawn passage: "Something old, too. They were your Grandma Swan's,' Charlie added. We had a jeweler replace the paste stones with sapphires.' Inside the box were two heavy silver hair combs. Dark blue sapphires were clustered into intricate floral shapes atop the teeth." Meyers chose Arceneaux and Cantwell's design, which is a rhodium-plated, sterling silver hair comb complete with 163 Russian-formula, 58-facet cubic zirconias, because it fit her criteria.

Arceneaux says while she is honored by this experience, it does not define her.

"I lived in and loved Lafayette for 42 years," says Arceneaux, 58, "and moved to Baton Rouge about 12 years ago. But no matter where I go or what I do, my heart will always be connected to Acadiana and the wonderful, warm people, the music and the flavors that never leave you."

She says she often misses Acadiana's nuances. "I didn't realize some of the small things you miss about Acadiana like hearing cher," says Arceneaux. "One day someone in a store I was in at the time said, Oh cher, that's beautiful.' Before I could see him, I told him, You must be from my neck of the woods.' When I turned around, it was [Gov.] Edwin Edwards. There's just something so sweet about cher."

She says two of their pieces will also be featured in the final installment of The Twilight Saga. Arceneaux and Cantwell agree business is growing since their work is being featured in the holiday blockbuster smash. National publications like People Magazine have featured their work on their website and in print.
"Well, we have had a lot more activity," says Cantwell, a Baton Rouge native.

"It's been exciting," adds Arceneaux. "The phone has been ringing off the hook. It's a great business, and it will grow even more with this shot in the arm."

Want to feel immortal and have a piece of Bella Swan with you on your wedding day? Visit thegildedlily.biz to purchase a Bella replica hair comb; the fine jewelry versions start at $199. The sterling silver "Bridal Heirloom Edition" exact replica worn by Bella in the Twilight Saga: Breaking Dawn Part-1 will set you back $399. For the die-hard Twilight Saga fan, a 14-carat white gold version with genuine diamonds and sapphires will cost more than $30,000.