A study authored by University of Tennessee professor and economist Donald Bruce predicts 25 percent of Louisiana's $1.3 billion in sales tax collections won't make it to the state's coffers. 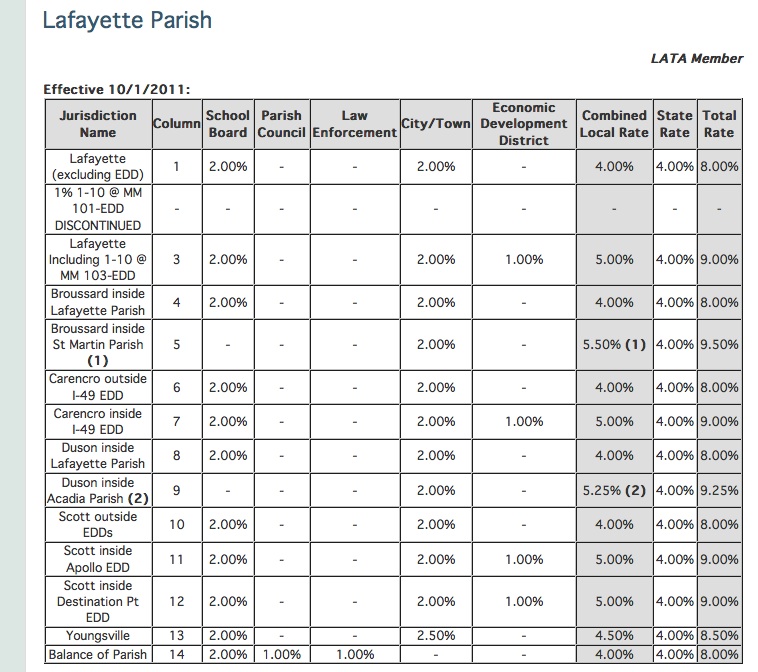 Congressional legislation aimed at sales tax collections for online shopping has prompted lengthy discussions recently over just how much states are losing to online retailers. In Louisiana, the staggering losses are in the neighborhood of $352 million for this year alone.

For shoppers looking to save a few bucks, online buying often means avoiding both the local and state sales taxes one would pay if purchases were made at a cash register. In the city limits of Lafayette, Duson, Carencro, Scott and Broussard, the local sales tax rate is 4 percent, combined with the state's 4 percent sales tax for a total of 8 percent, according to the Lafayette Economic Development Authority's website. In Youngsville, shoppers pay an 8.5 percent sales tax, while a number of economic development districts (aka TIFs) throughout the parish garner higher sales tax rates as shown in the accompanying chart provided by the Louisiana Association of Tax Administrators.

According to The Daily Iberian, a study authored by University of Tennessee professor and economist Donald Bruce predicts 25 percent of Louisiana's $1.3 billion in sales tax collections won't make it to the state's coffers, also pointing out that the state's "self-reporting" sales tax law asking consumers to track their own online purchases generated only $1.3 million in collections during the last fiscal year:

But evading sales tax is not so easy as shopping online. Many cyberspace retailers charge the tax at the transaction, but it varies from retailer to retailer. Walmart charges the local area's standard [sales tax rate] as does Barnes and Noble. Both Target and Sports Authority charge around 4 percent. Meanwhile, on Ebay some sellers charge tax, others do not. One Florida retailer charged based on his state sales tax. And Amazon, the largest online retailer, according to the Los Angeles Times, charges sales tax only for five states. Louisiana is not one of them.

Bruce said the problem is that enforcement on these taxes is "basically nil." He mentioned that Louisiana and other states put a line on the income tax form where citizens may voluntarily list purchases where they paid no sales tax.

According to The Advocate, the Marketplace Fairness Act making its way through both the U.S. House and Senate would give states more autonomy in pursuing sales tax collections on out-of-state businesses, more specifically on Internet companies. A similar measure was proposed in the Louisiana Legislature this year but failed, The Advocate reports:

State Rep. Rosalind Jones, D-Monroe, attempted to get at taxes through affiliates' Louisiana addresses by authoring legislation earlier this year that would have expanded the definition of merchants responsible for collecting Louisiana's sales and use tax. Jones' House Bill 641 would have included in that definition Internet companies with a physical presence in the state or who work through an independent contractor in the state.

[Gov. Bobby] Jindal opposed the legislation, which failed to clear the state Senate.