A new, small-scale version of the former Acadiana mug shot mecca claims to have no association with Christopher Hebert. 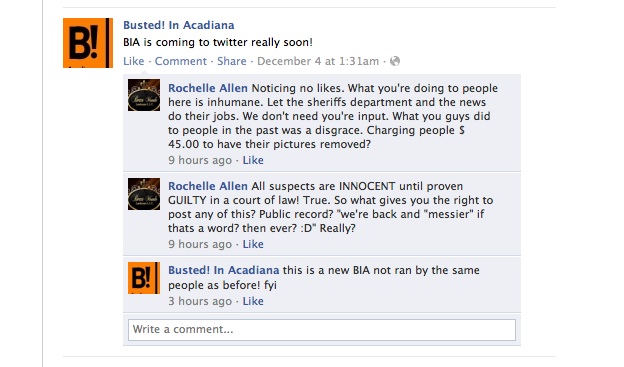 A Dec. 3 message appearing on a new Busted! in Acadiana Facebook page says it all: "We're back and messier ... than ever."

Busted in Acadiana, the wildly popular mug shot fan page whose administrator was exposed and eventually arrested following a series of articles first published in The Independent, is back.

Two weeks after the story was published, Hebert was arrested for stalking and cyberstalking, both related to a series of complaints of electronic and phone threats filed by a female victim late last year. The arrest is unrelated to Busted in Acadiana.

The original Busted page boasted roughly 45,000 "fans" before its final demise, though the new page, Busted! in Acadiana, had less than 80 fans as of Friday morning and has so far only published crime stories from local media outlets. Mug shot photo albums, the feature that brought the page both fame and infamy during its six months in operation, have not been featured on the new page.

Hebert was also arrested in December 2001 and booked for public intimidation, disturbing the peace by appearing intoxicated and remaining where forbidden following an incident on Jefferson Street.

The new Busted administrator claims on its page that "this is a new BIA and not ran by the same people as before." Based on Hebert's track record of using social media for harassment and incitement, only time will tell.

Read more on Hebert and Busted in Acadiana here, here and here.