TV3 claims victory in the latest Nielsen survey. Not so fast, says TV10. 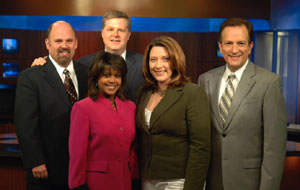 Excitement filled the air on the set and in the sales and management offices of KATC-TV3 when results from Nielsen Media Research's February ratings revealed the local station had snagged the No. 1 position in the market ' besting venerable market leader KLFY-TV10 for the first time in more than four decades of competition.

Across the board, Nielsen's February 2005 sweeps period, a four-week survey, showed strong growth for the local ABC affiliate: it took the lead in total households in the eight-parish "designated market area" at both 5 p.m. and 6 p.m. TV10, the CBS affiliate, held on in the 10 p.m. slot, though its audience has stayed flat over the past year. KATC, meanwhile, jumped from a 9 rating in February 2004 to a 14 this year, trailing KLFY by three points with its 10 p.m. newscast. (A rating represents the percent of televisions tuned into a specific program or station.)

KLFY's top local official, however, claims it's too soon for KATC to ring the victory bell. "There are weeks that have anomalies in them," says TV10 General Manager Mike Barras. "[There are] numbers that just jump out at you." He immediately contacted Nielsen about the February "book," as it's called. Barras, who declined to reference specific instances in the survey, says the New York-based company, which measures audiences nationwide, agreed to take a closer look at the numbers.

For its part, Nielsen is standing by the February book for the Lafayette market. Nielsen officials say sporadic spikes in the numbers are common, and the average of the four-week period is the most accurate gauge of viewership. Deanna DeYoung, who represents the local market for Nielsen, says the company's goal was to get 435 diary samplings and 440 were returned. Each household gets the diary for a week. "It's my responsibility to look at a sample every time the book comes out," DeYoung says. "The sample looks great. There's nothing about it that looks statistically invalid."

Barras is not the only person who sees irregularities in the survey results. Julie Calzone of Calzone & Associates, a local ad agency, says she's already decided to eliminate certain weeks in the new ratings from consideration in her future television ad placements. "As an agency what you look for is consistency. When you look at week four across the board, they're just way out of whack. I've been in business 22 years, and I'll just tell you that media trends don't change overnight. You just don't see the numbers shift like that."

Last week Nielsen did clarify that a mailing glitch caused some third-week diaries to be counted in the fourth week ' though at least one New Orleans-based media buyer says that doesn't explain this book's inconsistencies. Scott McNulty, vice president and media director of The Graham Group, says while weekly variations are not uncommon, the issue in this book is specific to the ratings in three time slots, 5 p.m., 5:30 p.m. and 6 p.m. "If the [late diaries] were the culprit, why did it make KATC's numbers go up in three time periods only? It definitely looks unusual for it to be that dramatic."

Still, McNulty says he's not discarding the fourth week's numbers. "We're always taking into consideration all types of variables," he says, explaining that the Academy Awards, for example, caused a number spike on Sunday at 8 p.m. for KATC during the fourth week. Other time period jumps, like the 5 p.m. newscast in that week, are not as easily accounted for (any special promotions, contests or other types of activity would have been footnoted in Nielsen's book). "Because the station is moving up, people are going to take a lot harder look at the numbers. I'm not saying the book's wrong or that KATC didn't earn it," McNulty says.

While survey results are tightly held by local media due to contractual agreements with Nielsen, The Independent Weekly obtained figures from specific days. On Mondays at 5 p.m., for example, KATC got a 10 rating the first week, and a 14 and 10 the following two weeks. In week four, however, it logged a 26. In contrast, KLFY performed more consistently, logging 17, 15, 15 and 9. On Mondays at 5 p.m. in February of last year and again in November, it was KLFY that had roller coaster variations, tallying a 10, 22, 6 and 15 in November, and a 21, 16, 18 and 30 in February.

"There were numerous situations in those books to TV10's benefit," says KATC General Manager Nannette Frye.

"We're pleased with knowing where we stand on all newscasts," declares TV10's Barras. Though Barras' station led at 10 p.m., he's still "not happy" with those numbers as well. He declined to discuss specifics.

The Nielsen numbers at 10 p.m. show KATC skyrocketing from a 3.3 rating to a 9.7 rating in the key demographic of 18 to 49 year olds, the most important category for media buyers. KLFY slipped slightly from a 10.9 to a 10.2 in this age bracket. (KATC attributes its swell to an increase in total viewers tuning in at 10 p.m.)

Though it's the only available measure of local television stations' audience ' and in turn the primary tool for placing TV advertising ' Nielsen's diary system is anything but scientific, as it relies on participants to log in their daily viewing habits. In 51 larger markets across the country, much of the sampling is done electronically, with meters placed on the television sets, eliminating human error from filling in diaries. In five major markets, "local people meters" are utilized, eliminating diaries altogether.

Both methods, TV set and people metering, require significant equipment investment and Nielsen personnel to set up the "Nielsen families" and carefully monitor the equipment and TV usage. To become a metered market, Lafayette's Nielsen subscribers, like agencies and television stations, would have to absorb that cost. "Not every market can financially fund that," says Nielsen spokeswoman Kerry Kielar.

Despite what some view as an unexplainable caveat of this book, it's undeniable that KATC has been gaining ground on its rival.

Longtime media observer Bruce Schultz, former Acadiana bureau chief at The Advocate, says KATC has come close in the past but always seemed to take a misstep ' like letting a key anchor go ' to kill its momentum. This time around, however, all signs point to stability at the station. He particularly favors KATC luring former TV10 anchors Hoyt Harris and Darla Montgomery back to the business, as well as the successful recruitment of meteorologist Rob Perillo from TV10 in early 2004. "To steal him away, that took a lot ' hell, it took a lot just in attorneys' fees," says Schultz, referring to TV10's unsuccessful legal challenge to uphold Perillo's non-compete clause in his contract.

Schultz sees TV3 hitting its stride. "I think they finally got the right combination of people, not just the anchors, Nannette Frye, too," he says.

Regarding TV10, Schultz says that station's 10 p.m. co-anchors, Val Wilson and Chuck Huebner, "just don't seem to gel." TV10's forté has always been its familiar faces, Schultz adds, which is why he thinks pulling Maria Placer off the air last year was a bad idea (she still makes minor on-air appearances). "I think they should have kept her on in a more prominent role."

Placer is so popular in the community that her name was in circulation as a potential candidate for city-parish president two years ago, Schultz says. "Just the other day, people were talking about [former TV10 meteorologist] Dick Faurot. He's still a household name."

No longer plagued by turnover both at the anchor desk and behind the scenes ' both Frye and KATC News Director James Warner insist they are in Lafayette for the long haul ' the ABC affiliate has been climbing steadily in Nielsen's quarterly surveys since Frye joined in late 2002. This, though, is the first real victory. "To finally see these numbers happen in a ratings book â?¦ it's exciting," says Frye.

Among the major adjustments of the past two years, says Warner, is the station's "to the point" news format. "We have to get to the point and move on, which is our producing, writing and reporting philosophy," he says. The primary effort at the station has been to jam as much news content into each broadcast as possible. The time slot where the station has remained flat ' while KLFY has lost a small amount of its audience ' is in its morning show. From 6-7 a.m., both stations have an 11.5 rating, but an hour earlier, from 5-6 a.m., TV3 has a 5.4 rating and TV10 has a 6.1.

Recently, KATC switched to a more focused news format in the morning, hoping to reverse those numbers. Less time is devoted to lighter features like cooking demonstrations and community events promos, and there's less cutting up among the personalities.

"We're being very careful not to throw everything out and start from scratch," Warner says. "We have the most popular personalities [Tom Voinche, Candice Gale and meteorologist Dave Baker] in the morning. Hopefully, you're going to see more out of the talents of those three."

Media buyer McNulty says only time will tell if KATC has really taken control of the ratings. "The real question is going to be, 'What's the new book going to look like?'" The results of Nielsen's May survey will be published in late June.