Tell Santa you want a thinner waistline this December and give up trying yourself - there is a new baker in town. Katie Bakes has opened in River Ranch. 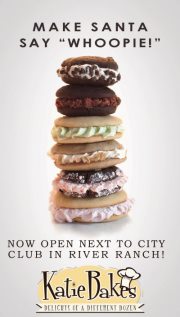 Tell Santa you want a thinner waistline this December and give up trying yourself - there is a new baker in town. Katie Bakes has opened in River Ranch.

Located at 1042 Camellia Blvd., next to City Club, Katie Bakes is the baked lovechild of Katie Meaux. Meaux is a Lafayette native and LSU alumna who decided to come back to her first love of baking. After working in Baton Rouge at Cupcake Couture, Meaux has opened her own shop back home.

The menu boasts cake pops and whoopie pies. Cake pops are the new trend after cupcakes, rounded bites of cake on a stick. Perfect for someone who says they just want a few bites. Katie Bakes offers nearly 20 different flavors from which to choose. Whoopie pies are traditionally a New England treat and are most like gigantic, homemade Oreos or a cookie sandwich. If it sounds decadent, it is. Katie Bakes has nearly 20 flavors of these as well. One example is the Ragin' Cajun whoopie pie: chocolate cayenne buttercream and then rolled in cinnamon sprinkles. Another is the French Quarter whoopie pie which is a brown sugar and pecan whoopie with maple buttercream filling and praline topping. Check out her menu here.

Katie Bakes also features CC's as its java of choice. Milk and other beverages are available as well.