Embattled Lafayette City-Parish Councilman Chris Williams is abruptly transferred from his regional director's position with the Louisiana Technical College to a new job in Baton Rouge. 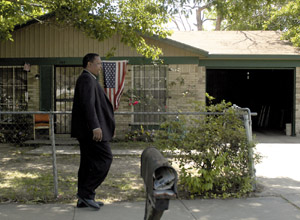 Two weeks ago, Louisiana Community and Technical College System President Walter Bumphus tried to put to rest rampant rumors that Chris Williams ' who has been embroiled in controversy through his other job as a Lafayette city-parish councilman ' was no longer working as one the system's regional directors. "That is not accurate," Bumphus told The Daily Advertiser in a Dec. 13 story titled, "Bumphus quashes Williams rumors." Bumphus said Williams was working on special assignment in Baton Rouge ' but that he still held the LCTCS Region IV (Acadiana area) director's position.

The next day, however, Williams was indeed transferred to a newly created position in Baton Rouge, director of corporate services. In essence, the appointment made permanent the "temporary" special projects Williams had been working on for a week in Baton Rouge.

While LCTCS officials described the move as a "lateral transfer," the new job does represent a pay cut for Williams. In his job as regional director, Williams earned an annual base pay of $99,500 with standard benefits and no special allowances. In his new position, Williams' base pay will be $89,000 with standard benefits and no special allowances. LCTCS Vice President Jimmy Sawtelle has taken over as interim Region IV director, with the position likely to be open to applicants in order to find a permanent replacement.

In response to a public records request from The Independent Weekly, LCTCS Public Information Director Kizzy Payton issued a statement that Williams, who was named to the new post without an application or interview process, is a natural fit for the job.

LCTCS neither advertised for applicants nor posted any notice of the director of corporate services position prior to Williams' transfer.

"With the tremendous response from our colleges for certification offerings that the LCTCS provides in the area of corporate training, the need for a Director of Corporate Services position was identified," Payton's statement reads. "Dr. Williams was determined to possess the necessary skill set to quickly move these endeavors forward to better serve the needs of business and industry. Therefore, there was no notice of vacancy and call for applicants for the position."

LCTCS does have a policy requiring it to advertise and form a search committee in hiring all "full time faculty" and "administrative positions at director level or above," a provision that was in effect when Williams was hired as Region IV director.

However, LCTCS Board President Brett Mellington says that policy traditionally has not applied to the central office staff. System President Bumphus, who stepped down last month to take another job in Texas, had been responsible for such hires, according to Mellington. "He's just like the CEO of a corporation. He's going to hire the people he feels he needs. Now when we get to the chancellors and the regional directors for each of the directors, there's probably more buy-in from the community. That's why we do the searches."

Mellington, who also serves as downtown business development manager for the Lafayette Economic Development Authority and the Downtown Development Authority, says the move was recommended by Bumphus and approved by the board. Mellington adds that Williams' recent high-profile political and legal battles likely factored into the decision.

"We just felt that Chris would probably be better suited where he is now in the new position," says Mellington. "We feel like he's got some talents that we need in the system office. And certainly, Chris has been in the media and in the limelight quite a bit lately, and it hasn't been real positive. I think that's pretty well common knowledge. So I think that Walter [Bumphus] and [Vice President for Workforce Training and Development] Jim Henderson felt that this was the best place for him."

Williams' tenure as regional director lasted less than six months. Bumphus promoted him to the post in July after Williams' former job as Region IV vice chancellor was eliminated in an administrative streamlining of the state's community and technical college system.

Williams was not the popular choice for the regional director's job. Before the appointment was made, the LCTCS District 4 faculty senate ' a 130-member body representing the entire regional staff ' voted on which of the two final candidates, Williams and LCTCS Lafayette Campus Dean Phyllis Dupuis, it would like to see get the job. Williams got only 11 votes, while Dupuis collected 105, with the remaining faculty either abstaining or simply deciding not to vote on the issue.

LTC spokeswoman Payton says that no audits or job performance reviews were performed on Williams during his time as regional director. Mellington says Williams' transfer was not prompted by staff concerns over his hire or performance.

When Williams took the regional director's job, he was already involved in a contentious crusade on the city-parish council to have Willow Street renamed in honor of Dr. Martin Luther King Jr. (After more than a year of stalemate on the issue, the council recently passed a resolution supporting a memorial thruway along Willow Street.) Williams accused fellow councilmen who were resistant to the idea of racism and helped organize pickets outside of council meetings and at this year's Festival International.

Less than a week after Williams began working as the Region IV director for LCTCS, he wrote "Dr. Martin Luther King Jr. Drive!" on the council dais following one of its meetings. Councilman Randy Menard turned Williams in for defacing public property, sparking a prolonged legal battle in which Williams attempted to have all parish judges barred from hearing the case. Williams has appealed his sentence, which included community service and a fine.

Williams, who did not return a call for comment, is term-limited off the city-parish council at the end of this year and widely rumored to be eyeing a possible run for state legislative office. In his new position with LCTCS, Williams, who previously reported directly to Bumphus, will now commute to Baton Rouge to work directly under Henderson.

In her answer to The Independent's public records request, Payton says Williams will "develop and implement [a] business plan for the delivery of system level, non-credit corporate training (e.g. Command Spanish, Lean Six Sigma and HazMat, etc.) to include analysis of demand, development of marketing strategies, and execution process design."

"I think [Williams] has got some talents that Jim Henderson felt he could use," Mellington says. "Workforce development, he's been involved in that. He knows a lot of people, makes contacts, so that's why we moved him."