One of the Northside's best-kept secrets keeps it simple.

One of the Northside's best-kept secrets keeps it simple. By Anna Purdy 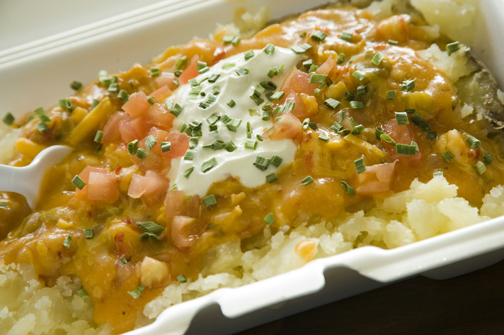 As a young drinkslinger at a now defunct dive on Moss Street, The Potato Place at 3803 Moss St. was one of the nearest spots to nab grub that wasn't fast food - a term that is questionable in both its parts - so it was an easy choice to eat there. Besides, something about a gigantic spud loaded down with seafood, cheese, chicken, beef or even red beans and sausage is a marvel of culinary architecture - a fat spud split and bearing the weight of amazing fillings and toppings somehow retained by the potatoes skins.

Potatoes are satisfying. Like a pinstripe suit or a little black dress, they go with everything, irony being if you eat too many you may not fit into said black dress, but whatever - a great meal of potatoes leaves you full and happy. It's a tuber so important a political movement was named for it.

The Potato Place has been around for 15 years this July. It's owned by Cindy Brown, who began cooking professionally when her youngest son was a junior in high school. Her husband Jim works with her. It is a small space and hasn't undergone too many changes in the many years it's been open, but it's never needed to do so.
The Potato Place does have wraps, cookies, bisque, gumbo and some pasta dishes, but when you go to a place with this name and see a collection of Mr. Potato Heads on top of the drink machine, you gotta go for the potatoes.

Jim brought out samples of the kind of potatoes they use. Each weighs about 2.5 pounds and is the size of a Ragin' Cajun's forearm. It's baked, split and for lack of a better term chopped to allow for the toppings of your choice to blend and meld with the starch. The potatoes range from $6 to $7 plus tax depending on what you get, and one is enough. One is enough for lunch and dinner and breakfast the next day if you are selective, taking up the length and width of the Styrofoam box it's served in.

What is it about broccoli and cheese? Even the most finicky child usually eats it. The Potato Place's broccoli and cheese potato was the favorite of everyone at our table. The broccoli isn't overdone and the cheese doesn't have that warning yellow sheen most often honoring bowling alley nachos - it is thick and shredded to better melt on the hot spud. Add diced tomatoes and a some sour cream and it's a party.

If you love cheeseburgers and you want to be gluten-free, try The Potato Place's cheeseburger potato. You 86 the fries and the hamburger bun and the potato kind of takes the place of both. Heaps of ground beef and cheese poured over the potato with tomatoes and jalapeños. Juice from the jalapeños jar, by the way, is waiting for you on the counter if you want extra kick without the crunch.

Cindy says her favorite aspect of owning and working at The Potato Place is "meeting people." Tucked in the shopping center at the corner of Pont des Mouton and Moss, the Potato Place is a small space with a small staff - one of whom was The Independent's own Heather Miller when she was a young thing - and has the cozy feel of familiar clientele. It's a joint you either know about or you don't.

And no matter how people with a vested interest in real estate and commerce try to rebrand it, those of us who know the Northside are never going to call it "Upper Lafayette." Check out the menu at potatoplace.net.