UL's football team wrapped its first-ever day of bowl activity in a very fitting way -- without many strikes or spares but with a lot of fun.

NEW ORLEANS Drew Carey once sung, "I can't go to Parma cause my Edsel will not run, we're goin' bowling, so don't lose her in Solon." 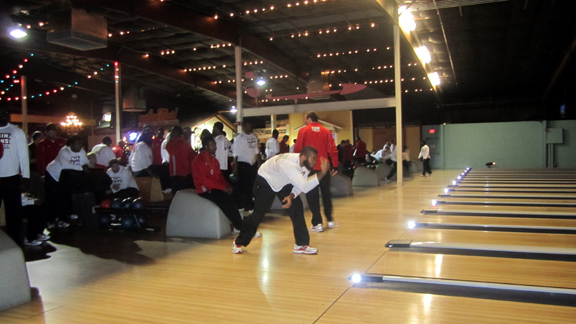 As far as anyone knows, UL's football team didn't have an Edsel here Tuesday and wasn't heading for anyplace called Solon, but the Ragin' Cajuns did go bowling Tuesday night literally.

The Cajuns' first day of their first-ever Division I bowl trip ended up at New Orleans' venerable Rock 'N' Bowl, where the team blew off more than a fair amount of steam before settling into three more days of preparation for Saturday's R+L Carriers New Orleans Bowl. The Cajuns, playing in the postseason for the first time since 1970, take on San Diego State at 8 p.m. in the Mercedes-Benz Superdome.

And while the visiting Aztecs were having a nightmarish travel day San Diego State's charter flight was late arriving and departing San Diego on Tuesday, and was not scheduled to arrive in the Crescent City until after 11:30 p.m. the Cajuns were having some fun.

"Some of us had heard about this place," says senior linebacker Lance Kelley of Lafayette, "but then we found out we were coming over here. With the DJ and the bowling and the food, it's a great place for all these guys to just relax and have fun."

That was the goal on a first day that included a welcome from a brass band and Mardi Gras bead bearers upon arrival. After checking into their New Orleans Marriott headquarters and having an official welcome meeting with bowl chairman Paul Valteau, the team and party loaded up the three buses and headed to the "new" Rock 'N' Bowl.

The well-known sports and music house has been a regular stop for team parties for the New Orleans Bowl and the Sugar Bowl for years. But a new location opened to replace the old facility three years ago, and remains a fixture in the Crescent City music and entertainment scene.

And on Tuesday, those lanes got a workout. Most Cajun bowlers didn't quite match the level they've shown on the field this year on the way to their 8-4 record. 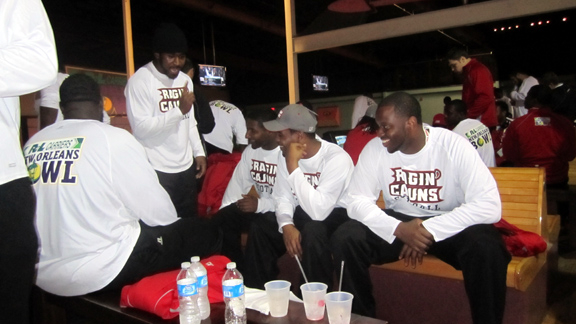 But there were exceptions. Kelley, for one, recorded a strike with a between-the-legs shot, much to the delight of a cameraman who was recording the attempt. Cajun coach Mark Hudspeth, who purposefully strode up and down the lanes watching his charges, was suitably impressed when he wasn't barking out instruction.

"You gotta get that spin right on the ball," Hudspeth yelled to no player in particular. "Get it over there next to that last arrow."

"He's walking up and down giving everyone pointers," Kelley says. "Are you surprised he's coaching?"

Senior quarterback-running back Brad McGuire of Gulf Breeze, Fla., turned in a solid 178 in his first game, starting out spare-strike-strike-spare.

"It's a kind of cool activity," says McGuire, who admitted to being only an occasional bowler. "It's a celebration for me and for all these guys. We're going bowling."