The Cajun football squad took a break from New Orleans Bowl preparations Wednesday, and got to experience real American history.

NEW ORLEANS UL's football team could have made this week's trip to the R+L Carriers New Orleans Bowl all about football, and football only - spending all its time preparing for Saturday's contest against San Diego State.

Fortunately for the players and staff, the Ragin' Cajuns are adding many outings to this week's excursion that have nothing to do with football. One of the notable side trips came Wednesday afternoon when the squad visited the National World War II Museum on Magazine Street. 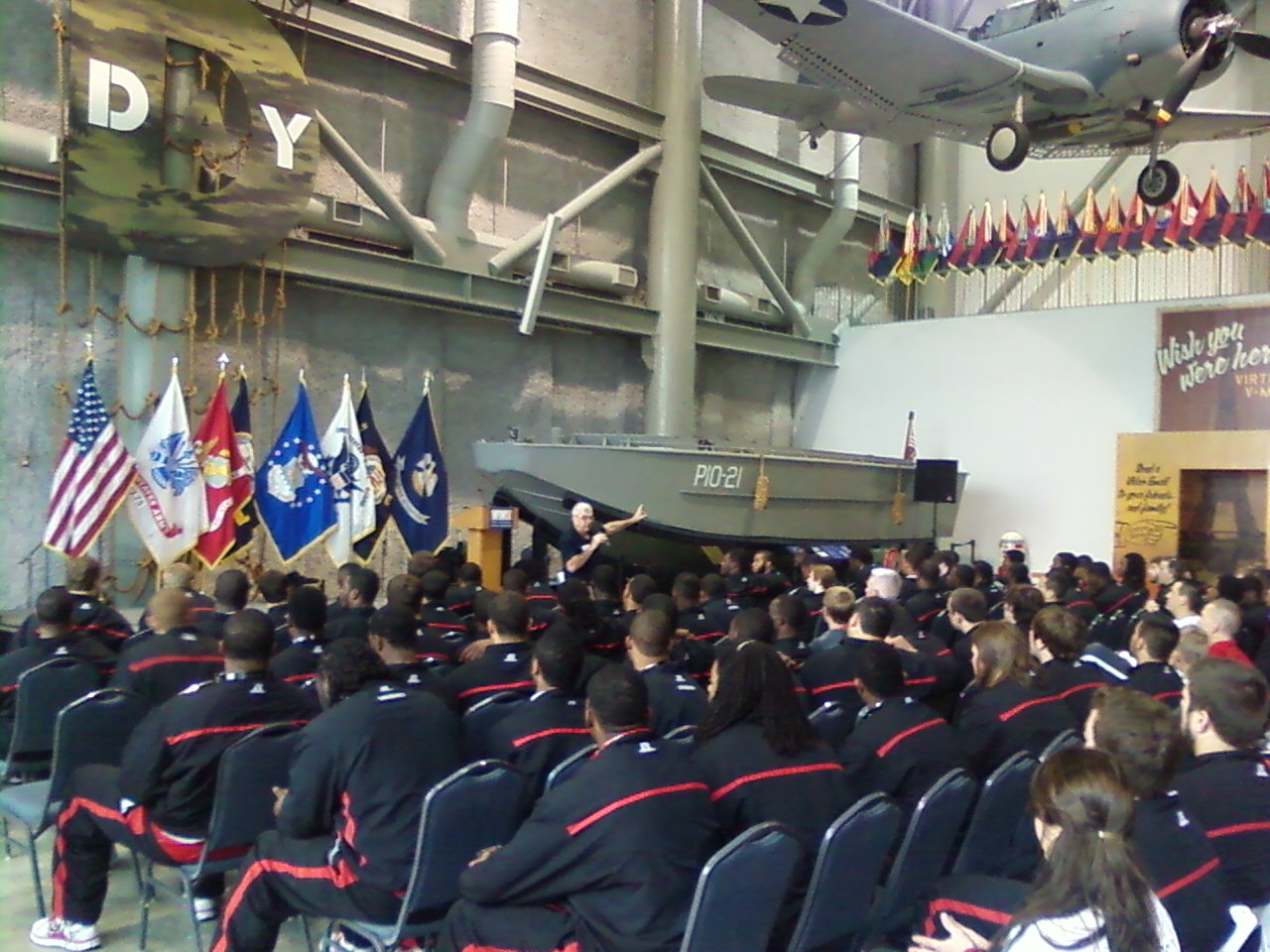 One of the notable side trips for the Cajuns during bowl week came Wednesday afternoon when the squad visited the National World War II Museum on Magazine Street.

"This is why bowl experiences are as long as they are," says UL Director of Football Operations Troy Wingerter, himself a former Cajun standout. "You can enjoy the experience, reap the benefits of having a successful season.

"When you play away games during the year, we go to the hotel and it's a business trip. You go in, do your job and win a football game, just to build on the possibility of eventually being able to do something like this."

The Cajuns went directly from their mid-day practice session at the Mercedes-Benz Superdome to the museum, where they took in the new 4-D film experience at the Victory Theatre and had time to individually explore the exhibits on both the D-Day invasion and the Pacific warfare.

Lest anyone think that the excursion was nothing but a force-fed history lesson, there was at least a partial reason that the Cajuns visited a place that spotlights military history. And it has to do with Rusty Whitt, UL's head strength and conditioning coach.

Whitt joined the Cajun staff in October of 2010 after a stint at Rice and had worked with Cajun basketball coach Bob Marlin for a while at Sam Houston State. But along with his collegiate work, Whitt served in the U.S. Army from 2003-09 as a Senior Special Forces Communication Sergeant in the 10th Special Forces Group. He was deployed to Iraq during Operation Iraqi Freedom V and VI and received a combat infantry badge, two Iraqi campaign medals and an Army commendation medal with valor.

"You hope when these guys see this, they appreciate what coach Whitt and his fellow soldiers went through and what those guys still go through," Wingerter says. "We overuse terms like warrior and being a soldier. Some of these guys may be warriors and that's what we want them to be, but you look in here and these guys are heroes."

While with the Special Forces, Whitt developed a comprehensive pre-deployment conditioning program for his team and still uses many of those concepts with his work with the Cajun athletic program. His conditioning of the Cajun team has been cited time and time again by UL head coach Mark Hudspeth and the staff during this year's turnaround season.

"Especially with the emphasis that coach Whitt has used, the military style training," Wingerter says, "this was a no-brainer for us to come over here and experience."

"I spent all day here when I came earlier," he says. "My wife was very patient with me, while I read all the displays, all the diaries, everything."